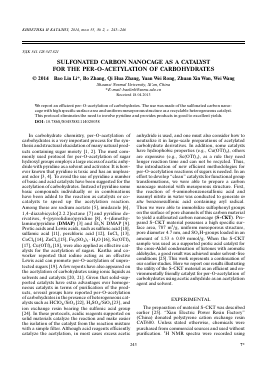 We report an efficient per-O-acetylation of carbohydrates. The use was made of the sulfonated carbon nano-cage with high specific surface area and uniform mesoporous structure as a recyclable heterogeneous catalyst. This protocol eliminates the need to involve pyridine and provides products in good to excellent yields.

In carbohydrate chemistry, per-O-acetylation of carbohydrates is a very important process for the synthesis and structural elucidation of many natural products containing sugar moiety [1, 2]. The most commonly used protocol for per-O-acetylation of sugar hydroxyl groups employs a large excess of acetic anhydride with pyridine as a solvent and activator. It is however known that pyridine is toxic and has an unpleasant odor [3, 4]. To avoid the use of pyridine a number of basic and acid catalysts have been suggested for the acetylation of carbohydrates. Instead of pyridine some basic compounds individually or in combinations have been added to the reaction as catalysts or co-catalysts to speed up the acetylation reaction. Among these are sodium acetate [5], imidazole [6], 1,4-diazabicyclo[2.2.2]octane [7] and pyridine derivatives, 4-(pyrrolidino)pyridine [8], 4-(dimethy-lamino)pyridine (DMAP) [3] and Et3N DMAP [9]. Protic acids and Lewis acids, such as sulfuric acid [10], sulfamic acid [11], perchloric acid [12], InCl3 [13], CoCl2 [14], ZnCl2 [15], Fe2(SO4)3 • H2O [16], Sc(OTf)3 [17], Cu(OTf)2 [18], were also applied as effective catalysts for the acetylation of sugars. Kartha and co-worker reported that iodine acting as an effective Lewis acid can promote per-O-acetylation of unprotected sugars [19]. A few reports have also appeared on the acetylation of carbohydrates using ionic liquids as solvents and catalysts [20, 21]. Given that solid-supported catalysts have extra advantages over homogeneous catalysts in terms of purification of the products, several groups have reported per-O-acetylation of carbohydrates in the presence of heterogeneous catalysts such as HClOVSiO2 [22], H2SO4/SiO2 [23], and ion exchange resin bearing the sulfonic acid group [24]. In these protocols, acidic reagents supported on solid materials catalyze the reaction and make easier the isolation of the catalyst from the reaction mixture with a simple filter. Although acid reagents efficiently catalyze the acetylation, in most cases excess acetic

anhydride is used, and one must also consider how to neutralize it in large-scale preparations of acetylated carbohydrate derivatives. In addition, some catalysts have hydrophobic properties (e.g., Cu(OTf)2), others are expensive (e.g., Sc(OTf)3), as a rule they need longer reaction time and can not be recycled. Thus, the introduction of new efficient methodologies for per-O-acetylation reactions of sugars is needed. In an effort to develop "clean" catalysts for functional group transformations, we were able to prepare a carbon nanocage material with mesoporous structure. First, the reaction of 4-aminobenzenesulfonic acid and isoamyl nitrite in water was conducted to generate in situ benzenesulfonic acid containing aryl radical. Then we were able to immobilize sulfophenyl groups on the surface of pore channels of this carbon material to yield a sulfonated carbon nanocage (S-CKT). Prepared S-CKT material possesses a high specific surface area, 787 m2/g, uniform mesoporous structure, pore diameter 4.7 nm, and SO3H-groups loaded in an amount of 1.53 ± 0.09 mmol/g. When the S-CKT sample was used as a supported protic acid catalyst for the cross-Aldol condensation of ketones with aromatic aldehydes, a good result was achieved under solvent-free conditions [25]. This work represents a continuation of our earlier studies. Here we report our results illustrating the utility of the S-CKT material as an efficient and environmentally friendly catalyst for per-O-acetylation of carbohydrates using acetic anhydride as an acetylation agent and solvent.

Table 1. Optimization of reaction conditions for the per-O-acetylation of glucose3

The acetylation of glucose for the optimization of reaction condition

A mixture of glucose (0.18 g, 1.00 mmol), acetic anhydride (1 mL, 10.57 mmol, about 2.0 equiv per OH-group), S-CKT or CAT600 (in amounts specified) and myo-inositol hexaacetate (0.11 g, 0.25 mmol, an internal standard) were stirred at a specified temperature. In this study a sequential sampling was conducted over a period of 10 min. The results ofGC analyzes served to calculate the yield of per-O-acetylated glucose.

General procedure for the synthesis of per-O-acetylated sugars

A mixture of sugar (1 mmol), acetic anhydride (1 mL) and S-CKT (20 mg) was stirred at 50°C for 30 min. After cooling to room temperature and centri-fuging, the supernatant was separated by decantation, and the residue was washed two times with ethyl acetate, combining the scourage with the supernatant. The liquid was diluted with ethyl acetate and washed with sodium

bicarbonate and water, dried with Na2SO4 and evaporated to dryness. The residue was purified by column chromatography with silica gel as a sorbent to afford the desired products in the yields. All products were characterized by m.p., XH NMR, IR, and MS analysis.

To assess the potentialities of S-CKT as a catalyst for the per-O-acetylation of sugars the per-O-acetyla-tion of glucose was investigated as a model reaction (Scheme), and a series of preliminary experiments was carried out by stirring a mixture of glucose (1.00 mmol, 180 mg), acetic anhydride (1 mL, 10.57 mmol, about 2.0 equiv per OH group), S-CKT (10 mg) and myoinositol hexaacetate (0.25 mmol, internal standard) at 50°C. The resulting mixture was sampled every 10 min and analyzed by GC. The results were recorded to calculate the yield of per-O-acetylated glucose (Table 1). The yields increased from 63% after 10 min to 89.2% after 30 min followed by a minor decrease to 88.9% within the essay time of 60 min (entry 1—6). Thus, an interval of 30 min was chosen as the optimal reaction time that was further used to select other reaction conditions, such as the dose of catalyst and reaction temperature.

SULFONATED CARBON NANOCAGE AS A CATALYST

The recycling of the spent catalyst is very important for the overall economic performance of a catalytic process. Although the S-CKT catalyst gives a stable suspension in water and highly polar solvents (EtOH, DMF), it can still be recovered easily from the reaction mixture by a simple centrifugation, multiple washing with water and acetone, and drying prior to recycling. Table 2 shows that the catalyst after five-fold recycling still retains a high level of catalytic activity for the per-O-acetylation of glucose, the fifth recycle catalyst gives the yield of 70.1% within the same reaction time. As we can see in Table 2, the catalyst activity declines with each recycle. Decreasing activity may be attributed to the loss of the catalyst and the loss of active sites upon recycling. Focusing attention on the catalytic properties of the ion exchange resin bearing the sulfonic acid group, Amberlite IR-120, was also tested as a catalyst for the per-O-acetylation of sugars [24]. It was reported that the acetylation catalyzed by Amberlite IR-120 needs longer reaction time, 7 h, and with a large excess of acetic anhydride gives the yield as low as 58.0% [24]. Nevertheless it was of interest to clarify whether the polystyrene cation exchange resin CAT600, an analogue ofAmberlite IR-120, could catalyze the acetylation of sugars. The test results are shown in Table 2. The data suggest that although CAT600 is an efficient catalyst for the per-O-acetyla-tion of glucose its reusab