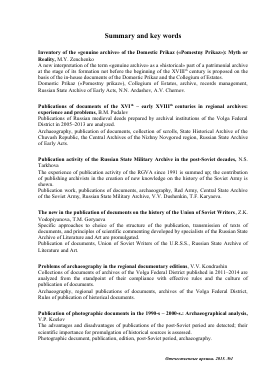 Inventory of the «genuine archive» of the Domestic Prikaz («Pomestny Prikaz»): Myth or Reality, M.Y. Zenchenko

A new interpretation of the term «genuine archive» as a «historical» part of a patrimonial archive at the stage of its formation not before the beginning of the XVIIIth century is proposed on the basis of the in-house documents of the Domestic Prikaz and the Collegium of Estates. Domestic Prikaz («Pomestny prikaz»), Collegium of Estates, archive, records management, Russian State Archive of Early Acts, N.N. Ardashev, A.V. Chernov.

Publications of Russian medieval deeds prepared by archival institutions of the Volga Federal District in 2005-2013 are analyzed.

The experience of publication activity of the RGVA since 1991 is summed up; the contribution of publishing archivists in the creation of new knowledge on the history of the Soviet Army is shown.

The new in the publication of documents on the history of the Union of Soviet Writers, Z.K. Vodopiyanova, T.M. Goryaeva

Specific approaches to choice of the structure of the publication, transmission of texts of documents, and principles of scientific commenting developed by specialists of the Russian State Archive of Literature and Art are promulgated.

Publication of documents, Union of Soviet Writers of the U.R.S.S., Russian State Archive of Literature and Art.

Problems of archaeography in the regional documentary editions, V.V. Kondrashin Collections of documents of archives of the Volga Federal District published in 2011-2014 are analyzed from the standpoint of their compliance with effective rules and the culture of publication of documents.

Publication of photographic documents in the 1990-s - 2000-s.: Archaeographical analysis,

S.O. Schmidt and the development of the domestic archaeography, V.Y. Afiani

The scientist's contribution to the theory, methodology, and organization of archaeographic work

Documents of the Central State Archives of the Republic of Dagestan on the medical care for people in the first half of the XIXth century, SB. Manyshev

The composition and source potential of documents of funds of the CSA RD on civil, military, and traditional medicine in the North Caucasus is exposed.

The content of diary entries for the period from 1 December, 1944 to 20 December, 1945 is commented; the significant potential of the document for reconstruction of the daily life on the frontline of the Great Patriotic War is shown.

Captured documents of TsAMO of the Russian Federation on operations in the Voronezh area in July, 1942, E.A. Shendrikov

The main groups of documents of the Wehrmacht from the Central Archive of the Ministry of Defense of Russia on operations in the direction of Voronezh are presented; the content of the report of the commander of the 24th German Panzer Division Major-General B.R. von Hauenschild is analyzed in detail.

«On waking up in the morning, the citizens of Kiev were literally stunned by the views of the city which had changed overnight». Memories of the artist N.A. Prahov. 1918-1919,

The artist's memoirs from his personal fund in the Department of Manuscripts of the State Tretyakov Gallery on cooperation of art workers with the new government, including the establishment of the trade union of artists, are introduced into scientific circulation. Fine arts, plan of monumental propaganda, trade union of Ukrainian artists, State Tretyakov Gallery, N.A. Prakhov.