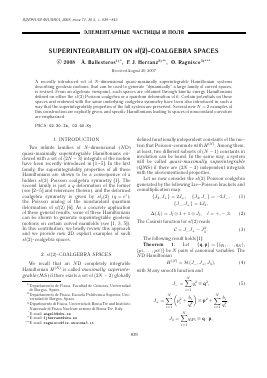 A recently introduced set of N-dimensional quasi-maximally superintegrable Hamiltonian systems describing geodesic motions, that can be used to generate "dynamically" a large family of curved spaces, is revised. From an algebraic viewpoint, such spaces are obtained through kinetic energy Hamiltonians defined on either the sl(2) Poisson coalgebra or a quantum deformation of it. Certain potentials on these spaces and endowed with the same underlying coalgebra symmetry have been also introduced in such a way that the superintegrability properties of the full system are preserved. Several new N = 2 examples of this construction are explicitly given, and specific Hamiltonians leading to spaces of nonconstant curvature are emphasized.

Two infinite families of N-dimensional (ND) quasi-maximally superintegrable Hamiltonians endowed with a set of (2N — 3) integrals of the motion have been recently introduced in [1—5]. In the first family, the superintegrability properties of all these Hamiltonians are shown to be a consequence of a hidden sl(2) Poisson coalgebra symmetry [1]. The second family is just a q deformation of the former (see [2—5] and references therein), and the deformed coalgebra symmetry is given by slz(2) (q = ez), the Poisson analog of the nonstandard quantum deformation of sl(2) [6]. As a concrete application of these general results, some of these Hamiltonians can be shown to generate superintegrable geodesic motions on certain curved manifolds (see [1,3, 5]). In this contribution, we briefly review this approach and we provide new 2D explicit examples of such sl(2)-coalgebra spaces.

defined functionally independent constants of the motion that Poisson-commute with H(N). Among them, at least, two different subsets of (N — 1) constants in involution can be found. In the same way, a system will be called quasi-maximally superintegrable (QMS) if there are (2N — 3) independent integrals with the abovementioned properties.

where bi are arbitrary real parameters, is a QMS system. The (2N — 3) functionally independent and "universal" integrals of the motion are explicitly given by

Moreover, the kinetic energy on ND Riemannian spaces with constant curvature k can be expressed in Hamiltonian form as a function of the sl(2) generators

in two different ways (see [1] for a detailed geometrical interpretation of this result):

The proof of this result is based on the fact that, for any choice of the function H, the Hamiltonian H(N) has an sl(2) Poisson coalgebra symmetry (see [7, 8]). Notice that for arbitrary N there is a single constant of the motion left in order to assure maximal superinte-grability. In case that an additional integral does exist, the latter does not come from the coalgebra symmetry and has to be found directly. Finally, note that in the case N — 2 quasi-maximal superintegrability is just equivalent to integrability (the coalgebra symmetry provides only (2N — 3) — 1 integral of the motion). However, these coalgebra systems can, by construction, be generalized to arbitrary dimension.

Let us now give some explicit examples of the QMS spaces coming from this construction as particular geodesic motion Hamiltonians.

Let us consider the symplectic realization (5) with bi — 0, Vi. The kinetic energy T of a particle on the ND Euclidean space EN can be directly interpreted as the generator J+. Therefore, the EN space can be thought of as the manifold with geodesic motions given by

The first one HP is just the kinetic energy for a free particle on the spherical SN (k > 0) and hyperbolic HN (k < 0) spaces in terms of Poincare coordinates q (coming from a stereographic projection in RN+1) and their associated canonical momenta p. The second one HB corresponds to Beltrami coordinates and momenta (central projection). In the framework here presented, both Hamiltonians can immediately be interpreted as deformations (in terms of the curvature parameter k) of the flat Euclidean motion given by k = 0. By construction, and for any dimension, both geodesic motions are QMS ones since they Poisson-commute with the integrals (6).

Note that, in principle, any homogeneous quadratic function of the canonical momenta can provide an admissible geodesic motion. In particular, we can consider the sl(2) Hamiltonian (with bi — 0, Vi)

with f an arbitrary smooth function, and we can derive from it the corresponding kinetic energy Lagrangian. Hence, the QMS geodesic motion is defined on a Riemannian manifold whose metric is given by

In the N — 2 case we can easily compute the corresponding Gaussian curvature K of the space; namely

where f' and f'' are the derivatives with respect to the variable q2 — (qf + q|). Therefore, we have obtained an infinite family of N — 2 spaces with, in general, nonconstant curvature depending on the "radial" coordinate q2 (see [9—11] for the study of 2D and 3D

superintegrable systems on spaces with nonconstant curvature). Obviously, the constant-curvature spaces given in terms of Poincare coordinates (8) are just particular cases of this construction with f (J-) — — (1 + kJ-)2 /2, that is, K — к.

Another remarkable sl(2)-coalgebra space, contained in (9), is obtained by setting

where a is a real parameter. For N = 2 this gives rise

to a space with a metric 2

also endowed with a constant Gaussian curvature K = —a. In contrast to the latter case, if one considers the free Hamiltonian

one finds a space whose metric for N = 2 reads

A MS (intrinsic) Smorodinsky—Winternitz system [12,13] on the ND generalization of this Darboux space has been recently obtained in [14].

We stress that the Hamiltonian (9) does not exhaust all the possibilities for free motion, since J2 = = (q • p)2 is also a quadratic homogeneous function in the momenta. Therefore, we could consider more complicated kinetic energy terms including Jf. A particular choice of this type would be the one given by the Beltrami kinetic energy presented in (8), for which the metric of the space reads

and all its sectional curvatures are constant and equal k. Another choice is given by the Hamiltonian

and whose nonconstant Gaussian curvature is found to be

In any case, we stress that the geometric interpretation of the canonical variables (q, p) can be completely different for each s¿(2)-coalgebra space.

The underlying coalgebra symmetry of this construction is also helpful in order to define QMS potentials V on s¿(2)-coalgebra spaces. This can be achieved, in general, by adding some suitable functions depending on J- to the kinetic-energy term and by considering arbitrary centrifugal terms that come from symplectic realizations of the J+ generator with constants bi's that are different from zero. Such a Hamiltonian would be given by

In the constant curvature case, the Hamiltonians that we would obtain in this way are the curved counterpart of the Euclidean systems for different values of the sectional curvature к, that lead to QMS potentials on the spaces SN (к > 0), HN (к < 0), and En (к = 0). A detailed description for such potentials can be found in [1]. The same scheme can be applied to the nonconstant-curvature spaces given in Section 2.2. In all the cases, the fact that Hamiltonian (20) is defined on the "abstract" sl(2)-coalgebra generators ensures the existence of the set of (2N — 3) "universal" integrals given in T