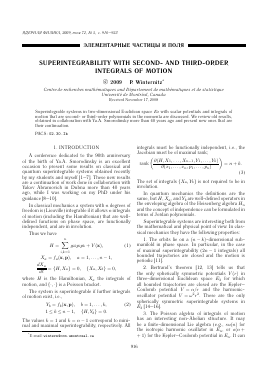 SUPERINTEGRABILITY WITH SECOND- AND THIRD-ORDER

Superintegrable systems in two-dimensional Euclidean space E2 with scalar potentials and integrals of motion that are second- or third-order polynomials in the momenta are discussed. We review old results, obtained in collaboration with Ya.A. Smorodinsky more than 40 years ago and present new ones that are their continuation.

A conference dedicated to the 90th anniversary of the birth of Ya.A. Smorodinsky is an excellent occasion to present some results on classical and quantum superintegrable systems obtained recently by my students and myself [1—7]. These new results are a continuation of work done in collaboration with Yakov Abramovich in Dubna more than 40 years ago, while I was working on my PhD under his guidance [8—10].

In classical mechanics a system with n degrees of freedom is (Liouville) integrable if it allows n integrals of motion (including the Hamiltonian) that are well-defined functions on phase space, are functionally independent, and are in involution.

where H is the Hamiltonian, Xa the integrals of motion, and {•, ■} is a Poisson bracket.

The system is superintegrable if further integrals of motion exist, i.e.,

The values k = 1 and k = n — 1 correspond to minimal and maximal superintegrability, respectively. All

integrals must be functionally independent, i.e., the Jacobian must be of maximal rank;

The set of integrals {Xa, Yb} is not required to be in involution.

In quantum mechanics the definitions are the same, but H, Xa, and Yb are well-defined operators in the enveloping algebra of the Heisenberg algebra Hn and the concept of independence can be formulated in terms of Jordan polynomials.

Superintegrable systems are interesting both from the mathematical and physical point of view. In classical mechanics they have the following properties:

1. The orbits lie on a (n — k)-dimensional sub-manifold in phase space. In particular, in the case of maximal superintegrability (2n — 1 integrals) all bounded trajectories are closed and the motion is periodic [11].

3. The Poisson algebra of integrals of motion has an interesting non-Abelian structure. It may be a finite-dimensional Lie algebra (e.g., su(n) for the isotropic harmonic oscillator in En, or o(n + + 1) for the Kepler-Coulomb potential in En. It can

4. A special case is quadratic superintegrability when all integrals are second-order polynomials in the momenta. This is related to multiseparability: the Hamilton—Jacobi equation allows the separation of variables in more than one coordinate system [8—10, 22—26].

In quantum mechanics the superintegrable systems have similar distinguishing properties:

2. In all known examples of maximally superintegrable systems the Schrodinger equation is exactly solvable. It has been conjectured that this is always the case [28].

3. The integrals of motion form a non-Abelian algebra under Lie commutation. Again, this may be finite-dimensional Lie algebra [14—16], a Kac— Moody algebra [17], a polynomial algebra [18—21], or some other structure.

Superintegrability has also been called accidental degeneracy, hidden symmetry [14, 30, 31], or dynamical symmetry [8—10]. Another appropriate name is "non-Abelian integrability" [32] since more than n independent integrals of motion by necessity generate a non-Abelian algebra. In this sense all infinite-dimensional nonlinear integrable systems are actually superintegrable. Thus for the Korteweg—de-Vries (KdV) equation, the Kadomtsev—Petviashvili equation, and all other soliton equations there exist infinite-dimensional non-Abelian Lie algebras of integrals of motion [33, 34].

The best known superintegrable systems are the hydrogen atom and the harmonic oscillator [14—16]. To our knowledge these were the only ones known until a systematic search was initiated [8—10].

2. SYSTEMATIC CONSTRUCTION OF QUADRATICALLY SUPERINTEGRABLE SYSTEMS IN E2 AND E3

A search for integrable and superintegrable systems in E2 was performed quite some time ago [8, 9]. It was restricted to the case of quadratic integrability. The results in classical and quantum mechanics are the same, so we present here only the quantum case.

where {•, ■} is an anticommutator. The commutativity condition [H, X] = 0 leads to the following results:

1. The even- and odd-power terms in X commute with H separately. Hence, unless V(x) is invariant under rotations, or translations in one direction, we can put gi(x) = 0.

2. The highest order terms in X lie in the enveloping algebra of the Euclidean Lie algebra e(2). Hence X must have the form:

A term proportional to pi + p2 has been removed by a linear combination with the Hamiltonian.

3. The function the potential V, and the constants in Eq. (5) are related by the condition

The compatibility condition for the two equations in (7) gives a condition on the potential:

This is precisely the necessary and sufficient condition for V to allow separation of variables in one of the four systems of coordinates in which the free Schro dinger equation allows separation, namely, Cartesian, polar, parabolic, or elliptic coordinates.

The form of the invariant X(5) can be simplified by rotations, translations, and linear combinations with H. There are two invariants formed out of the coefficients a, bi and ci, namely,

We see that the existence of the second-order integral XC, XR, Xp, or XE leads to the separation of variables in Cartesian, polar, parabolic, or elliptic coordinates, respectively. In elliptic coordinate t = = y/Lz is one half of the interfocal distance.

Let us now require that two linearly independent integrals Xi, X2 of the form (5) exist for a given Hamiltonian. This is precisely the case of superinte-grability. Four families of such potentials exist:

The results in three-dimensional space E3 are very similar [ 10]. For integrability we require the existence of two integrals X1, X2 commuting with H and each other. Restricting to second-order integrals, we find [10] that X1, X2 must have the form:

where A^k = A^, C£ = C^1, and Бгак are constants. Under E(3) Euclidean transformations the sets of commuting operators {H, X1, X2} are classified into 11 equivalence sets, corresponding to potentials separating in one of the 11 coordinate systems in which the free Schrodinger equation separates.

3.1. History and Formulation of the Problem

In 1935 J. Drach published two articles [36] reporting his search for integrable systems in a two-dimensional space having one integral of motion that is a third-order polynomial in the momenta. He found 10 such systems, each depending on three constants but not on any arbitrary functions. The results were obtained in classical mechanics, quantum mechanics was not treated. The two-dimensional space considered was the complex Euclidean plane E2(C).