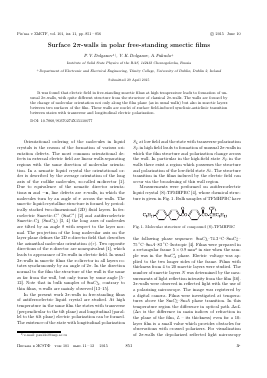 It was found that electric field in free-standing smectic films at high temperature leads to formation of unusual 27r-walls, with quite different structure from the structure of classical 27r-walls. The walls are formed by the change of molecular orientation not only along the film plane (as in usual walls) but also in smectic layers between two surfaces of the film. These walls are nuclei of surface field-induced synclinic-anticlinic transition between states with transverse and longitudinal electric polarization.

Orientational ordering of the molecules in liquid crystals is the reason of the formation of various orientation defects. The most common orientational defects in external electric field are linear walls separating regions with the same direction of molecular orientation. In a nematic liquid crystal the orientational order is described by the average orientation of the long axis of the rodlike molecules, so-called n-director [1]. Due to equivalence of the nematic director orientations n and — n, line defects are 7r-walls, in which the molecules turn by an angle of it across the walls. The smectic liquid-crystalline structure is formed by periodically stacked two-dimensional (2D) fluid layers. In ferroelectric Smectic-C* (SmC*) [2] and antiferroelectric Smectic-C^ (SmC^) [3, 4] the long axes of molecules are tilted by an angle 9 with respect to the layer normal. The projection of the long molecular axis on the layer plane defines the 2D c-director field that describes the azimuthal molecular orientation 4>(r). Two opposite directions of the c-director are nonequivalent [1], which leads to appearance of 27r-walls in electric field. In usual 27r-walls in smectic films the c-director in all layers rotates synchronously by an angle of 2tt. In the direction normal to the film the structure of the wall is the same as far from the wall, but only turns by some angle [512]. Note that in bulk samples of S111C4, contrary to thin films, TV-walls are mainly observed [13-15].

Measurements were performed on antiferroelectric liquid crystal (S)-TFMHPBC [4], whose chemical structure is given in Fig. f. Bulk samples of TFMHPBC have

the following phase sequence: SmC^-74.3°C-SmC*-75 °C-SmA-83 °C-Isotropic [4]. Films were prepared in a rectangular frame 5 x 0.9 mm2 in size when the sample was in the S111C4 phase. Electric voltage was applied to the two longer sides of the frame. Films with thickness from 4 to 20 smectic layers were studied. The number of smectic layers N was determined by the measurements of light reflection intensity from the film [16]. 27r-walls were observed in reflected light with the use of a polarizing microscope. The image was registered by a digital camera. Films were investigated at temperatures above the SmC*-SmA phase transition. In this temperature region the difference in optical path AnL (An is the difference in main indices of refraction in the plane of the film, L - its thickness) even for a 10-layer film is a small value which provides obstacles for observations with crossed polarizers. For visualization of 27r-walls the depolarized reflected light microscopy

Antiferroelectric SmC\ structure becomes polar in confined geometry of thin free-standing film [18-20]. Films with an odd number of smectic layers possess transverse polarization Pt. Nonzero Pt appears since layer polarizations directed in opposite directions in neighboring layers are noncompensated in iV-odd films. Films with an even number of layers possess longitudinal polarization Pl that is induced by free surfaces. This universal behavior is known as odd-even layering effect [19] and is observed in the temperature interval of the bulk SmC\ phase. Above the bulk transition temperature to Sm A phase thin films exist in tilted state due to surface ordering effect and the high temperature shift of the surface transitions [21-23]. On heating, after a series of structure transformations a new universal behavior is observed [19, 20, 24, 25]. At high temperature film behavior in electric field does not depend on the parity of its layer number, but is determined by the value of the field. Fig. 2 shows photographs of the film in the high-field state (a) and in the low-field state (b). A difference in brightness of the film (Figs. 2a and b) is connected with different orientation of the c-director with respect to the electric field (vertical direction). In the DRLM geometry used for imaging the low-field structure (b) appears brighter which indicates that the orientation of the molecular tilt planes is parallel to the electric field (low-field state Sl with longitudinal polarization Pl). For the value of E above a critical field Ec, the film appears dark (a) which means that the c-director is perpendicular to the electric field (high-field state St with transverse polarization Pt).

Fig. 2. Photographs of a smectic film in the high-field state (St) with transverse polarization (a) and in the low-field state (Sl) with longitudinal polarization (b). The transition from Sl- to St-state is induced by the electric field. Double dark and bright stripes are classical 2tt-walls. The orientation of the c-director in 2tt-walls in top and bottom surface layers of the film is shown schematically in St- and ^-states. The orientation of surface smectic layers is syn-clinic in St (a) and anticlinic in Sl (b). The horizontal dimension of each photograph is 260 ¿¿m, number of layers N = 11, T=77.4°C, E = 5.1 V/cm (a), E = 3.7V/cm (b)

ers appears due to breaking of up-down symmetry at the air-smectic interface [18]. In Sr-structure (Fig. 3) in the lower and the upper surface layers of the film the molecules tilt in the same direction (synclinic structure, c-director orientation is the same). Directions of the ferroelectric transverse polarizations coincide on two surfaces. Net polarization of the film is perpendicular to the tilt plane (transverse polarization Pt). In S^-structure (Fig. 3, the ground state without the field) in the lower and the upper surface layers the molecules tilt in the opposite directions (anticlinic structure, c-director orientation is the opposite). Net transverse polarization of the film is zero. Net polarization of the film is parallel to the tilt plane (longitudinal polarization Pl). Small difference of the energy between St and S^-states is connected with small tilt angle 6 in the middle of the film at high temperature. The transition from Sl to St~state on increasing field leads to the change of c-director orientation in surface layers and change of the type of polarization. The latter means that Pt > Pl- In antiferroelectric liquid crystals in high electric field the induced polarization [26, 27] can be important and can lead to a number of effects. In particular the induced po-