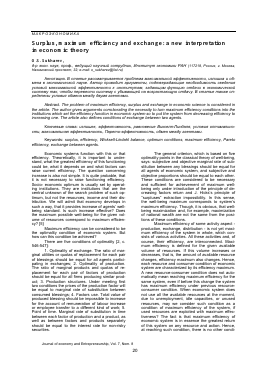 Economic systems function with this or that efficiency. Theoretically, it is important to understand, what the greatest efficiency of this functioning could be, what it depends on and what factors can raise current efficiency. The question concerning increase is also not simple. It is quite probable, that it is not necessary to raise functioning efficiency. Socio- economic optimum is usually set by operating institutions. They are institutions that are the central unknown of the search problem of such optimum, but not the resources, income and their distribution. We will admit that economy develops in such a way, that it provides increase of agents' well-being standard. Is such increase effective? Does the maximum possible well-being for the given volume of resources correspond to maximum efficiency? [5]

Maximum efficiency can be considered to be the optimality condition of economic system. But how can this condition be achieved?

1. Optimality of exchange. The ratio of marginal utilities or quotas of replacement for each pair of blessings should be equal for all agents participating in exchanges; 2. Optimality of production. The ratio of marginal products and quotas of replacement for each pair of factors of production should be equal for all firms producing similar product; 3. Production structures. Under meeting first two conditions the prices of the production factor will be equal to marginal rate of substitution between consumed blessings; 4. Factors use. Total value of produced blessing should be impossible to increase for the account of remuneration of labour increase or employee transfer to a different kind of work; 5. Point of time. Marginal rate of substitution in time between each factor of production and a product, as well as between factors and products separately should be equal to the interest rate for non-risky securities.

The general criterion, which is based on five optimality points in the classical theory of well-being, says: subjective and objective marginal rate of substitution between any blessings should be equal for all agents of economic system, and subjective and objective proportions should be equal to each other. These conditions are considered to be necessary and sufficient for achievement of maximum well-being only under introduction of the principle of decreasing factors return and J. Hicks's principle of "surpluses" extraction impossibility. In this sense, the well-being maximum corresponds to system's maximum efficiency. Though, it is obvious, that well-being maximization and, for example, maximization of national wealth are not the same from the positions of these conditions.

tion of the system with greater return. Non-involvement of a resource in production does not mean loss of efficiency. Moreover, use of this "free" resource can additionally reduce the efficiency of economic system instead of its rise. Hence, at economy functioning inside the curve of manufacturing feasibility maximum efficiency is possible. Being on a curve the system can have lower efficiency as reserve availability, as well as the possibility to use it, is a blessings of high value. Being on a curve of manufacturing feasibility the system loses this blessing and must make a sacrifice.

Now we will pass to definition of what is understood as surplus and whether it is possible to use this idea as one of the estimation criteria of well-being standard. As is known, the concept of surplus in respect to a consumer and producer was developed by A.Marshall in his work "Principles of Economic Science". Wondering, how the price actually paid for the blessing reflects the benefit from possession of this blessing, he introduced the concept of consumer surplus. Consumer surplus is the difference between the price, which the buyer is ready to pay to possess this blessing and the actual price which he pays buying it. It is a measure of his additional satisfaction [3, c.191].

There will be a surplus of the consumer for each kind of blessing. This surplus will be defined by elasticity of the demand curve, market organization and the price fixed in the market.

Surplus of manufacturer can be introduced on the analogy. Only instead of the consumer blessing for the manufacturer there is a resource and the market of production factors where the resources used for production of various blessings are sold and bought.

As it follows from the fair criticism of J. Hicks [5, c.134-135], money utility is not a constant and income and replacements effects must not be neglected while introducing the concept of consumer surplus and producer surplus. Moreover, the best interpretation of surplus is its identification with consumer benefit as a result of drop in the price of blessing, or with compensating change of income change the decrease of which compensated the drop in price. J.Hicks shows, that consumer surplus is necessary for the analysis of distributive effects and actually asserts, being oblivious, that commodity tax is a bigger burden for the consumer than in-

come tax, but at introduction of income tax the consumer feels better while the state functions worse as well as consumption of public blessings created by the state. Thereby, I would like to demonstrate, that the concept of so-called theory of surplus with reference to the definition of system's effectiveness including the distributive one is, to put it mildly, inconvenient, if not inadequate. The reason is that consumer "surplus" is compensated by consumer "shortage" which is not taken into consideration for some unclear reason both in A.Marshall's analysis, and in the analysis of J. Hicks.

Let's show it with the following simple scheme (see Figure 1), reflecting acquisition and

Let's admit that the curve of demand for blessing DD sets a certain market for this blessing. And consumers buy the amount of blessing Q1, which allows fixing price p1 in this market for the given period of time. Those agents who consume the amount of blessing less than Q1 should pay price p2 for the amount of consumption Q2 <Q1. However, price p1was fixed in the market and they will buy amount Q2 at the price p1<p2. Thus, interval BC according to A. Marshall means consumer surplus the value of which will be measured by the area of a right-angled figure p1p2BC for a cer