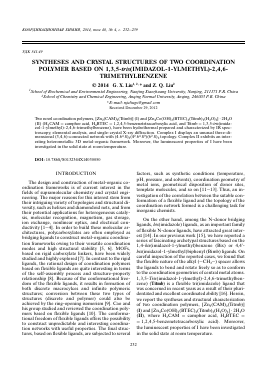 SYNTHESES AND CRYSTAL STRUCTURES OF TWO COORDINATION POLYMER BASED ON 1,3,5-ira(IMIDAZOL-1-YLMETHYL)-2,4,6-

The design and construction of metal-organic coordination frameworks is of current interest in the fields of supramolecular chemistry and crystal engineering. The major reasons for this interest stem from their intriguing variety of topologies and structural diversity, such as helixes and diamondoid nets, and from their potential applications for heterogeneous catalysis, molecular recognition, magnetism, gas storage, ion exchange, nonlinear optics, and electrical conductivity [1—4]. In order to build these molecular architectures, polycarboxylates are often employed as bridging ligands to construct metal-organic coordination frameworks owing to their versatile coordination modes and high structural stability [5, 6]. MOFs, based on rigid carboxylate linkers, have been widely studied and highly explored [7]. In contrast to the rigid ligands, the rational design of coordination polymers based on flexible ligands are quite interesting in terms of the self-assembly process and structure-property relationship [8]. Because of the conformational freedom of the flexible ligands, it results in formation of both discrete macrocylces and infinite polymeric structures; conversion between these two types of structures (discrete and polymer) could also be achieved by the ring-opening isomerism [9]. Cao and his group studied and reviewed the coordination polymers based on flexible ligands [10]. The conformational freedom of flexible ligands offers the possibility to construct unpredictable and interesting coordination networks with useful properties. The final structures, based on flexible ligands, are subjected to several

factors, such as synthetic conditions (temperature, pH, pressure, and solvents), coordination geometry of metal ions, geometrical disposition of donor sites, template molecules, and so on [11—13]. Thus, an investigation of the correlation between the sutable conformation of a flexible ligand and the topology of the coordination network formed is a challenging task for inorganic chemists.

On the other hand, among the N-donor bridging ligands, ¿/«(imidazole) ligands, as an important family of flexible N-donor ligands, have attracted great interest [14]. In our previous work [15], we have reported a series of fascinating archetypal structures based on the 1,4-Ws(imidazol-1-ylmethyl)benzene (Bix) or 4,4'-¿/s(imidazol-1-ylmethyl)biphenyl (Bimb) ligands. On careful inspection of the reported cases, we found that the flexible nature of the alkyl (—CH2—) spacer allows the ligands to bend and rotate freely so as to conform to the coordination geometries of central metal atoms. 1,3,5- 7ns(imidazol-1-ylmethyl)-2,4,6-trimethylben-zene) (Titmb) is a flexible tri(imidazole) ligand that was concerned in recent years as a result of their pluri-dentated and excellent coordinated ability [16]. Herein, we report the syntheses and structural characterization of two coordination polymers, [Zn2(CAM)2(Titmb)]

(II), where H2CAM = camphor acid, H4BTEC = = 1,2,4,5-benzenetetracarboxylic acid). Moreover, the luminescent properties of I have been investigated in the solid state at room temperature.

All chemicals and solvents were of reagent grade and used as received without further purification. The Titmb ligand was synthesized according to the reported method [17]. Elemental analysis was carried out on a PerkinElmer 240C elemental analyzer. The content of Co and Zn ion is based on ICP analysis. IR spectra were recorded on a Bruker Vector 22 FT-IR spectrophotometer by using KBr discs. The luminescent spectra for the powdered solid samples were measured at room temperature on a Hitachi F-4500 fluorescence spectrophotometer with a xenon arc lamp as the light source. In the measurements of emission and excitation spectra the pass width is 5 nm. All the measurements were carried out under the same experimental conditions.

X-ray diffraction analysis. Single-crystal data for complexes I and II were obtained on a Bruker Smart Apex II CCD with graphite-monochromated MoZ„ radiation (X = 0.71073 A) at 291(2) K using the w scan

technique. The data were integrated by using the SAINT program [18], which was also used for the intensity corrections for the Lorentz and polarization effects. An empirical absorption correction was applied using the SADABS program [19]. The structures were solved by direct methods using the program SHELXS-97 [20], and all non-hydrogen atoms were refined aniso-tropically on F2 by the full-matrix least-squares technique using the SHELXL-97 crystallographic software package [21]. The hydrogen atoms were generated geometrically. All calculations were performed on a personal computer with the SHELTXL crystallographic software package [21]. The details of the crystal parameters, data collection, and refinements for I and II are summarized in Table 1. Selected bond lengths and bond angles with their estimated standard deviations are listed in Table 2. Atomic coordinates and other structural parameters have been deposited with the Cambridge Crystallographic Data Centre (nos. 899225 and 804354; deposit@ccdc.cam.ac.uk or http://www.ccdc.cam.ac.uk).

The asymmetric unit of I contains Zn(1) and Zn(2) cations, both lying in general positions, two crystallo-graphically independent CAM2- dianions and one Titmb ligand. As shown in Fig. 1a, Zn(1) ion is coordinated by three carboxylate oxygen atoms from two different CAM2- dianions and two nitrogen atoms from two individual Titmb ligands to form a distorted trigonal bipyramidal geometry. The Zn(2) ion is surrounded by three carboxylate oxygen atoms from two independent CAM2- dianions and one nitrogen atom from the Titmb ligand to construct a distorted tetrahe-dral coordination geometry. The Zn-O distances range from 1.863(3) to 2.099(3) A, and the Zn-N distance is the range of 1.931(4)-2.050(4) A. The O(N)ZnO(N) bond angles range from 55.29(13)° to 143.69(13)°, which are similar to those observed in the reported complexes [22]. It is interesting to note that the two types of CAM2- dianions show different coordination modes. One bridges two Zn atoms with both two carboxylate groups in bidentate chelating coordination modes, while the other connects three Zn atoms with one of two carboxylate groups in a bidentate chelating coordination mode and the other one in a bidentate bridging coordination mode. As such, CAM2- dianions bridge Zn2+ ions to form a 1D [Zn(CAM)]n double chain with [Zn4(CAM)4] loops (Fig. 2). Interestingly, these 1D [Zn(CAM)]n double-chains are further linked by titmb ligands with cis, trans, trans conformation to generate a 3D framework (Fig. 3).

Better insight into such elegant frameworks can be achieved using the topology method: first, based on the considerations of the their connectivity, Zn(1), the dimer Zn2 and Titmb ligand are viewed to be four-,

Table 1. Crystallographic parameters and a summary of data collection and refinement for I and II