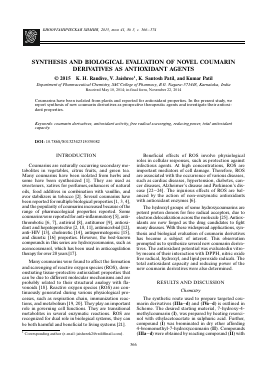 Coumarins have been isolated from plants and reported for antioxidant properties. In the present study, we report synthesis of new coumarin derivatives as prospective therapeutic agents and investigate their antioxi-dant properties.

Coumarins are naturally occurring secondary metabolites in vegetables, citrus fruits, and green tea. Many coumarins have been isolated from herbs and some have been synthesized [1]. They are used as sweeteners, xatives for perfumes,enhancers of natural oils, food additives in combination with vanillin, and avor stabilizers in tobacco [2]. Several coumarins have been reported for multiple biological properties [1, 3, 4], and the popularity of coumarins increased because of the range of pharmacological properties reported. Some coumarins were reported for anti-inflammatory [5], antithrombotic [6, 7], antiviral [8], antitumor [9], antioxidant and hepatoprotective [2, 10, 11], antimicrobial [12], anti-HIV [13], cholesretic [14], antispermatogenic [15], and diuretic [16] properties. However, the best-known compounds in this series are hydroxycoumarins, such as acenocoumarol, which has been used in anticoagulation therapy for over 20 years [17].

Many coumarins were found to affect the formation and scavenging of reactive oxygen species (ROS), demonstrating tissue-protective antioxidant properties that can be due to different molecular mechanisms and are probably related to their structural analogy with fla-vonoids [18]. Reactive oxygen species (ROS) are continuously generated during various physiological processes, such as respiration chain, immunization reactions, and metabolism [19, 20]. They play an important role in governing cell functions. They are transitional metabolites in several enzymatic reactions. ROS are recognized for dual role in biological systems, they can be both harmful and beneficial to living systems [21].

Beneficial effects of ROS involve physiological roles in cellular responses, such as protection against infectious agents. At high concentrations, ROS are important mediators of cell damage. Therefore, ROS are associated with the occurrence of various diseases, such as cardiac diseases, hypertension, diabetes, cancer diseases, Alzheimer's disease and Parkinson's disease [22—24]. The injurious effects of ROS are balanced by the action of non-enzymatic antioxidants with antioxidant enzymes [6].

The hydroxyl groups of some hydroxycoumarins are potent proton donors for free radical acceptors, due to electron delocalization across the molecule [25]. Antiox-idants are now forged as the drug candidates to fight many diseases. With these widespread applications, synthesis and biological evaluation of coumarin derivatives has become a subject of interest. This observation prompted us to synthesize several new coumarin derivatives. The antioxidant potential was evaluatedin vitro-by means of their interaction with DPPH, nitric oxide free radical, hydroxyl, and lipid peroxide radicals. The total antioxidant capacity and reducing power of the new coumarin derivatives were also determined.

The synthetic route used to prepare targeted coumarin derivatives (IIIa—d) and (IVa—d) is outlined in Scheme. The desired starting material, 7-hydroxy-4-methylcoumarin (I), was prepared by heating resorci-nol with ethylacetoacetate in sulphuric acid. Further, compound (I) was brominated in dry ether affording 4-bromomethyl-7-hydroxycoumarin (II). Compounds (IIIa—d) were obtained by reacting compound (II) with

All compounds were characterized using IR, XH NMR, 13C NMR, and mass spectrometry. The purity of these compounds was determined by thin layer chromatography. Characteristics of all compounds are given in the Experimental section.

Scavenging of DPPH free radicals. DPPH assay is based on the measurements of the scavenging ability of

compounds towards the stable DPPH radical. Our study determines the antiradical capacity of coumarin derivatives by measuring the decrease in absorbance of DPPH at 517 nm [26]. Resulting percentage of color change from purple to yellow was based on the amount of compound required for decreasing the initial DPPH radical concentration. Coumarin derivatives (IIIa), (IIIb), (IIId), (IVb), and (IVc) with IC50 values in the range of 0.027—0.096 |M/mL (Table 2) showed more effective radical-scavenging activities in comparison with the standard rutin. These compounds exhibited lowest IC50 values with potent antioxidant activity, which is related to presence of 7-hydroxyl and 4-furan carboxyl groups. Compounds (IIIa), (IIId), and (IVc) substituted with 2-furfuryl, 7-hydroxyl, 2-furyl carboxyl, and 7-acetoxy derivatives possess the highest radical-scavenging activity with IC50 of 0.030, 0.035, and 0.027 |M/mL, respectively. DPPH antiradical scavenging activity was dependent on proton donor capacity of compounds.

Scavenging of nitric oxide free radicals. In mammals, nitric oxide radical is an important cellular messenger involved in many physiological and pathological processes. Low levels of nitric oxide radical production are important in protecting an organ, such as liver, from ischemic damage. However, increased levels of nitric oxide radical production results in direct tissue damage and contributes to vascular collapse and other diseases. In the method used, sodium nitroprus-side spontaneously generates nitric oxide, which interacts with oxygen to produce nitrite ions [27—29]. Nitrite ions react with Griess reagent, which forms a purple azo dye. The degree of decrease in the formation of purple azo dye is the extent of scavenging. 7-Hydroxy substituted coumarin derivatives were more potent than 7-acetyl coumarin derivatives. In the series of 7-hydroxy derivatives, compounds (I), (IIIb), (IIIc), and (IIId) showed the highest percentage inhibition. With the exception of (IIIa), all compounds exhibited high antioxidant activity with IC50 values of 0.102, 0.053, 0.096 and 0.035 |M/mL for (I), (IIIb), (IIIc), and (IIId), respectively, lower than that of the standard, ascorbic acid (IC50 0.34 |M/mL). The potent antioxidant activity was attributedto the presence of 7-hydroxy and 4-furyl carboxyl on coumarins against nitric oxide free radicals. On the other hand, 7-acetyl 4-furyl substituted coumarins (IVi—d) were less active towards nitric oxide free radical with higher IC50 values (Table 2).

Scavenging of hydroxyl radical by hydrogen peroxide. Hydrogen peroxide has strong oxidizing nature with high oxidizing capacity of enzymes, such as superoxide dismutase and catalase. Hydrogen peroxide crosses the membrane and slowly oxidizes molecules present in the body [30, 31]. The ability of synthesized coumarin derivatives to scavenge hydroxyl radical was determined. Among the tested compounds, derivatives (II) and (IIId) demonstrated the most effective scavenging activity with IC50 values of 0.09 and

Table 2. IC50 values of novel coumarin derivatives (IIIa—d) and (I\a-d) and the standards