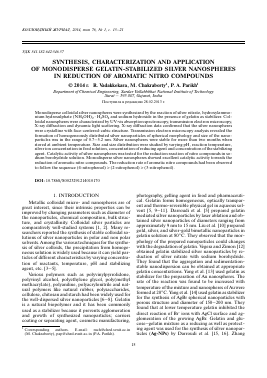 Metallic colloidal micro- and nanospheres are of great interest, since their intrinsic properties can be improved by changing parameters such as diameter of the nanoparticles, chemical composition, bulk structure, and crystallinity. Colloidal silver particles are comparatively well-studied systems [1, 2]. Many researchers reported the synthesis of stable colloidal solutions of silver nanoparticles in polar and non polar solvents. Among the various techniques for the synthesis of silver colloids, the precipitation from homogeneous solution is widely used because it can yield particles of different characteristics by varying concentration of reactants, temperature, pH and stabilizing agent, etc. [3—5].

Various polymers such as polyvinylpyrrolidone, polyvinyl alcohol, polyethylene glycol, poly(methyl methacrylate), polyaniline, polyacrylonitrile and natural polymers like natural rubber, polysaccharides, cellulose, chitosan and starch had been widely used for the well-dispersed silver nanoparticles [6—8]. Gelatin is a natural biopolymer and it has been commonly used as a stabilizer because it prevents agglomeration and growth of synthesized nanoparticles; carriers coating or separating agent, cosmetic manufacturing,

photography, gelling agent in food and pharmaceutical. Gelatin forms homogeneous, optically transparent and thermo-reversible physical gel in aqueous solvent [5, 9—11]. Darroudi et al. [5] prepared gelatin mediated silver nanoparticles by laser ablation and obtained silver nanoparticles of diameters ranging from approximately 9 nm to 15 nm. Liu et al. [10] prepared gold, silver, and silver-gold bimetallic nanoparticles in gelatin solution at 80°C. They observed that the morphology of the prepared nanoparticles could changes with the degradation of gelatin. Vegera and Zimon [12] obtained gelatin stabilized silver nanoparticles by reduction of silver nitrate with sodium borohydride. They found that the aggregation and sedimentation-stable nanodispersion can be obtained at appropriate gelatin concentrations. Yang et al. [13] used gelatin as stabilizer for the preparation of Au nanospheres. The rate of the reaction was found to be increased with temperature of the mixture and nanospheres ofAu were formed at 20°C. Ymg et al. [14] used gelatin as stabilizer for the synthesis of AgBr spherical nanoparticles with porous structure and diameter of 150—200 nm. They found that at lower temperature gelatin inhibited the direct reaction of Br- ions with AgCl surface and agglomeration of the growing AgBr. Gelatin and glucose—gelatin mixture as a reducing as well as protecting agent was used for the synthesis of silver nanoparticles (Ag-NPs) by Darroudi et al. [15, 16]. Zhang

In light of the aforementioned data, we made an attempt to synthesize uniformly distributed stable monodisperse colloidal silver nanospheres. In this study, gelatin was used as stabilizing agent because it is cheap, easily available and has no harmful effect on the environment compared to other stabilizing agents. Different parameters, which affect particle size and size distribution, were studied systematically. The reduction of 4-NP, 3-nitrophenol (3-NP) and 2-nitro-phenol (2-NP) was carried out to compare the catalytic activity of colloidal nanospheres.

silver nitrate solution was adjusted to 9. Then, two solutions were mixed with constant stirring for 2 h at 20°C.

2.3. Procedure for the Reduction of Nitro Compounds

The catalytic activity of colloidal silver nanospheres was measured for the reduction of 4-NP, 3-NP and 2-NP. The reduction reaction was carried out in a standard cuvette (1-cm path length, room temperature, 303 K), 1 mL of ice-cold solution of NaBH4 (8 x x 10-2 M) was mixed with 1 mL of water and 1 mL of nitro compound (5 x 10-4 M). 100 |L (0.4 x 10-4 g Ag) of colloidal silver nanospheres were added in reaction mixtures and monitored by UV-vis spectra at different time interval.

The reaction mechanism for the synthesis of silver nanospheres can be drawn as follows:

Temperature of the reaction is a key factor for the production of silver nanosphere colloids. At lower temperature, the viscosity of the solution increased which reduced the diffusion rate of Ag+ ions and NH2OH and the overall rate of reaction too. At low temperature (5°C), more nitrogen gas was produced and hollow Ag nanospheres were formed on the surface of nitrogen gas bubbles [23].