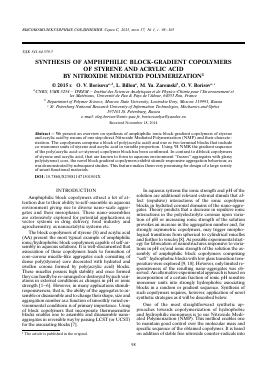 Amphiphilic block copolymers attract a lot of attention due to their ability to self-assemble in aqueous environment giving rise to diverse nano-scale aggregates and their mesophases. These nano-assemblies are extensively explored for potential applications as vector systems in drug delivery, food industry and agrochemistry, as nanocatalytic systems etc.

The block copolymers of styrene (S) and acrylic acid (AA) present the most typical example of amphiphilic ionic/hydrophobic block copolymers capable of self-assembly in aqueous solutions. It is well-documented that association of these copolymers leads to formation of core-corona micelle-like aggregates each consisting of dense poly(styrene) core decorated with hydrated and swollen corona formed by poly(acrylic acid) blocks. These micelles possess high stability and once formed they can hardly be re-arranged or destroyed by such variations in external conditions as changes in pH or ionic strength [1—6]. However, in many applications stimuli-responsiveness, that is, the ability of the aggregates to assemble or disassemble and to change their shape, size and aggregation number as a function of smoothly varied environmental conditions is of primary importance. Using of block copolymers that incorporate thermosensitive blocks enables one to assemble and disassemble nano-aggregates in reversible way by passing LCST (or UCST) for the associating blocks [7].

1 The article is published in the original.

In aqueous systems the ionic strength and pH of the solution are additional relevant external stimuli that affect (repulsive) interactions of the ionic copolymer blocks in hydrated coronal domains of the nano-aggre-gates. Theory predicts that a decrease in repulsive ionic interactions in the polyelectrolyte coronae upon variation of pH or increasing ionic strength of the solution provokes an increase in the aggregation number and, for strongly asymmetric copolymers, may trigger morphological transitions from spherical to cylindrical micelles and further to vesicles [8]. As possible experimental strategy for fabrication of nanostructures responsive to variations in pH or/and ionic strength of the solution the assembly of amphiphilic block copolymers comprising "soft" hydrophobic blocks with low glass transition temperature were explored [9, 10]. However, only limited responsiveness of the resulting nano-aggregates was observed. An alternative experimental approach is based on incorporation of a certain fraction of ionic pH sensitive monomer units into strongly hydrophobic associating blocks in a random or gradient sequence. Synthesis of such copolymers requires, however, application of novel synthetic strategies as it will be described below.

One of the most straightforward synthetic approaches towards copolymerization of hydrophobic and hydrophilic monomers is to use Nitroxide Mediated Polymerization (NMP). This method enables one to maintain good control over the molecular mass and specific sequence of the obtained copolymer. It is based on addition of stable free nitroxide counter-radicals into

reaction mixture. Interaction and reversible binding of these counter-radicals with the ends of growing chains assures sequential growth of the chains during the whole polymerization process. The specific sequence of hydrophobic and hydrophilic comonomer units in the resulting polymer depends strongly on the kinetic parameters of the copolymerization reaction. These parameters have to be determined independently for each specific pair of the comonomers, but also depend on the reaction conditions, as it will be discussed below for a particular combination of styrene and acrylic acid copolymerized in diox-ane in the presence of SGl.

The method of synthesis of di- and triblock gradient copolymers of S and AA was developed in refs [11— 15] and is schematically presented in Schemes 1 and 2. The reaction was performed in dioxane at 120°C in the

presence of alkoxyamine, 2-methylaminoxypropion-ic-SG1 (BlocBuilder® or MAMA, 99%) or di-alkoxyamine (DIAMS, 99%) as an initiator and slight excess of N-tert-butyl-(1-diethyl-phosphono-2,2-dimethylpropyl) nitroxide SG1 (9%) as counter radical in order to avoid side reactions and to ensure a good control of the chains growth. The procedure consists of two stages: in the first stage the AA was polymerized during 4 h. This reaction enabled us to obtain mono- or bifunctional macroinitiator for the second reaction stage. At the second stage S was added to the reaction mixture in the amount equal to the residual amount ofAA and the reaction was continued. Two methods of the addition of S were exploited: S was added either at once in the beginning or it was added in small amounts during the second reaction stage using a pump. We refer to these two methods of addition of S as batch and semi-batch techniques.

As follows from the results presented in Table 1, polymerization process in both systems occurs with a good yield. The molecular mass of the product increases after addition of S. This observation suggests that living polymerization occurs according to mechanism presented in Schemes 1 and 2. However, in order to prove controlled mechanism of polymerization one has to check how the molecular mass of the synthesized polymers changes upon an increase in conversion. Also, the sequence of AA and S comonomers in the copolymers, which depends on the reactivity ra-

tios, has to be specified. Below we consider how these issues were addressed.

Determination of the Molecular Mass of the Product versus Conversion

Controlled radical polymerization is characterized by linear growth of the molecular mass of the polymers as a function of conversion. The linear dependences of the number average molecular mass of the product on conversion are presented in Fig. 1 (lines connecting the symbols are given to guide the eye). One can conclude that irrespectively of the method of addition of styrene and the nature of the initiator the polymerization occurs according to living mechanism.

We remark, that, strictly speaking, the linear growth of the molecular mass, Mn, upon an increase in conversion cannot be considered as an ultimate proof of the living mechanism of