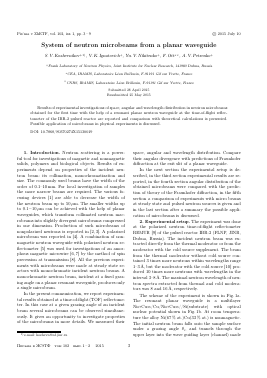 System of neutron microbeams from a planar waveguide

Results of experimental investigations of space, angular and wavelength distribution in neutron microbeams obtained for the first time with the help of a resonant planar neutron waveguide at the time-of-flight reflec-tometer of the IBR-2 pulsed reactor are reported and comparison with theoretical calculations is presented. Possible application of microbeams in physical experiments is discussed.

1. Introduction. Neutron scattering is a powerful tool for investigations of magnetic and nonmagnetic solids, polymers and biological objects. Results of experiments depend on properties of the incident neutron beam: its collimation, monochromatization and size. The commonly used beams have the width of the order of 0.1-10 mm. For local investigation of samples the more narrow beams are required. The various focusing devices [1] are able to decrease the width of the neutron beam up to 50 ¡im. The smaller widths up to 0.1—lO/im can be achieved with the help of planar waveguides, which transform collimated neutron mac-robeams into slightly divergent microbeams compressed in one dimension. Production of such microbeams of nonpolarized neutrons is reported in [2,3]. A polarized microbeam was reported in [4]. A combination of nonmagnetic neutron waveguide with polarized neutron re-flectometer [5] was used for investigations of an amorphous magnetic microwire [6, 7] by the method of spin precession at transmission [8]. All the previous experiments with microbeams were made at steady state reactors with monochromatic incident neutron beams. A monochromatic neutron beam, incident at a fixed grazing angle on a planar resonant waveguide, produces only a single microbeam.

In the present communication, we report experimental results obtained at a time-of-flight (TOF) reflectome-ter. In this case at a given grazing angle of an incident beam several microbeams can be observed simultaneously. It gives an opportunity to investigate properties of the microbeams in more details. We measured their

space, angular and wavelength distribution. Compare their angular divergence with predictions of Fraunhofer diffraction at the exit slit of a planar waveguide.

In the next section the experimental setup is described, in the third section experimental results are reported, in the fourth section angular distribution of the obtained microbeams were compared with the prediction of theory of the Fraunhofer diffraction, in the fifth section a comparison of experiments with micro beams at steady state and pulsed neutron sources is given and in the last section after a summary the possible application of microbeams is discussed.

2. Experimental setup. The experiment was done at the polarized neutron time-of-flight reflectometer REMUR [9] of the pulsed reactor IBR-2 (FLNP, JINR, Dubna, Russia). The incident neutron beam was extracted directly from the thermal moderator or from the moderator with the cold source supplement. The beam from the thermal moderator without cold source contained 3 times more neutrons within wavelengths range 1-3 A, but the moderator with the cold source [10] produced 10 times more neutrons with wavelengths in the interval 3-8 A. The maximal neutron wavelength of neutron spectra extracted from thermal and cold moderators was 8 and 16 A, respectively.

The scheme of the experiment is shown in Fig. la. The resonant planar waveguide is a multilayer Ni67Cu33/Cu/Ni67Cu33//Si(substrate) with optical nuclear potential shown in Fig. lb. At room temperature the alloy Ni(67% at.)Cu(33% at.) is nonmagnetic. The initial neutron beam falls onto the sample surface under a grazing angle 9i, and tunnels through the upper layer into the wave guiding layer (channel) made

Fig. 1. (a) - Scheme of experiment, (b) - Neutron optical potential of the sample as a function of the coordinate 2 perpendicular to the sample layers

of Cu. Inside the middle layer the neutron wave density at some wavelengths is resonantly enhanced [11]. In the potential system Fig. lb three resonances of orders n = 0, 1, 2 correspond to the region of total reflection of the neutrons from the bottom layer N167CU33. There are also resonances with n > 2 but their intensity is lower because neutrons at these resonances can pass through the bottom layer N167CU33 outside the waveguide. The enhanced neutron wave after channeling [12-14] along the guiding layer reaches the exit edge and leaks out through the gap of the width d equal to the thickness of the channeling layer. The outgoing microbeam has an angular divergence 50, which is determined by the law of the Fraunhofer diffraction

where A is the neutron wavelength. The divergent microbeam is registered by two-dimensional positionsensitive (PSD) 3He detector with spatial resolution 2.7 mm. The distance sample-detector was 4.94 m. The full time-of-flight base was 33.94 m. The angular divergence of the incident beam was 1.2 mrad.

Fig. 2. Two-dimensional map of the neutron intensity in dependence on the neutron wavelength and the scattering angle at the fixed grazing angle of the incident beam 7.68 mrad. The ovals show the calculated positions of the microbeams of different orders. The points around them are related to background created by scattering and also to refracted and specularly reflected parts of the incident beam

neutron wavelength A and the vertical one corresponds to the outgoing with respect to horizon angle 0. The specularly reflected and direct beams were blocked by Cd beam-stops as shown in Fig. la. The counts near position of the direct beam correspond to the refracted one. The spots marked by ellipses correspond to the microbeams of different resonance orders n = 0, 1, 2. The space distribution of the neutron microbeam intensity reflects the two-dimensional distribution of the neutron wave function density \ipn(z, \)\2 in the waveguide [3], where z is the coordinate perpendicular to the sample surface and n = 0, 1, 2, ... is the resonance order. The two-dimensional map represents the distributed low intensity of the microbeams comparable to the level of background. It is difficult to see well-defined spots of the beams in this case. But we can see the peaks on the integrated intensity.

In Fig. 3, the dependence of the neutron intensity registered by PSD on the neutron wavelength is shown for various grazing angles of the incident beam. The intensity was integrated over the wide angle range be-

In Fig. 4 the dependence of microbeams neutron intensity on exit angle is shown for various resonance or-

Fig. 3. The neutron intensity as a function of the neutron wavelength at various grazing angles of the incident beam: 2.93 (a), 3.63 (b), 6.46 (c), 7.68 (d) mrad. The energy at the resonances n = 0, 1, 2 correspond to total reflection of neutrons from the bottom Ni67Cu33 thick layer. The microbeam intensity is higher. The neutron microbeam intensity of the resonances n > 2 is lower because of the neutron transmission through the bottom Ni67Cu33 thick layer

tween specularly reflected and the direct beams. Measurements at 0i = 2.93 mrad were made without cold source, and measurements at other grazing angles of the incident beam were done with the cold source at the thermal moderator. The maxima of the neutron counts correspond to various resonance orders. The neutron wavelength of a microbeam decreases with decrease of the grazing angle of the incident beam and with increase of the resonance order. At the angles 3.63, 6.46, and 7.68 mrad the presented intensity is summed over two nearby wavelength channels to diminish the statistical error bar.

7.68 mrad respectively. Left (refracted) and right (specularly reflected) beam regions around the microbeam peaks are blocked by Cd beam-stops to diminish the background level. It is clearly seen that the width of the central peak increases with increase of the neutron wavelength as follows from Fraunhofer diffraction theory. Quantitative description