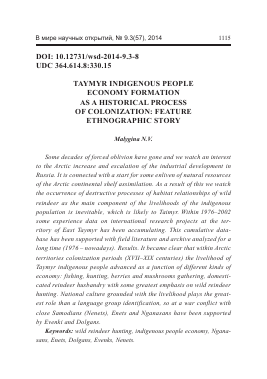 Some decades of forced oblivion have gone and we watch an interest to the Arctic increase and escalation of the industrial development in Russia. It is connected with a start for some enliven of natural resources of the Arctic continental shelf assimilation. As a result of this we watch the occurrence of destructive processes of habitat relationships of wild reindeer as the main component of the livelihoods of the indigenous population is inevitable, which is likely to Taimyr. Within 1976-2002 some experience data on international research projects at the territory of East Taymyr has been accumulating. This cumulative database has been supported with field literature and archive analyzed for a long time (1976 - nowadays). Results. It became clear that within Arctic territories colonization periods (XVII-XIX centuries) the livelihood of Taymyr indigenous people advanced as a junction of different kinds of economy: fishing, hunting, berries and mushrooms gathering, domesticated reindeer husbandry with some greatest emphasis on wild reindeer hunting. National culture grounded with the livelihood plays the greatest role than a language group identification, so at a war conflict with close Samodians (Nenets), Enets and Nganasans have been supported by Evenki and Dolgans.

have caused some specific demands of ensure all areas of life and economic activityfocusing on a problem of welfare maintenance and even surviving of the indigenous people of North territories whose livelihood has been formed by an ancient wild reindeer hunting culture as some stepped historical process of this portion of an Arctic circum.

Place of our interest was the Taimyr Peninsula. This is a huge territory of about 400000 km2, northernmost portion of East Siberia. Within 19762002 some experience data on international research projects at the territory of Taymyr (west portion) has been accumulating. This cumulative database has been supported with field literature and archive of Krasnoyarsk area analyzed for a long time (1976 - nowadays).

Aborigines (autochthones) of Taimyr Peninsula Nganasans are the most Eastern of the peoples of the Samoyedic language family, descendants of the ancient population of Northern Siberia and the northernmost tundra population of Eurasia Neolithic hunters for reindeer. It was composed of various origin tribal groups. Archaeological data show a close relation between the first inhabitants of the Peninsula with a population of the basin of the Middle and Lower Lena River. From there they went on the Taimyr Peninsula, about six thousand years ago, who had been subsequently influenced by the Tymyr Samodians came from the West to. Sometimes Nganasans identify with tau-nganasans who are known by some myths only. Some other point of view: Nganasans are the descendants of Neolithic hunters, the bearers of

round dwelled reindeer which was the ground of a livelihood of people [11, 13]. So, this territory was a Promised Land both for the ancient inhabitants and for some new-comers. Colonization period I (period of assimilation). Enets is a little group of indigenous people of Taymyr; - their forefathers lived in the territory of mid-Ob-river. By B. Dolgikh [4] south they embraced a vast territory of Taz-river basin-the low and mid-stream and Turukhan-right bank of Yenissei-river (a mouth of Kureika and Nizhniy Tun-guska-rivers) north. A source of the end of XVth century is the first data about this people but with some other name - molgonzei which has been the main portion of the prominent Russian yasak Mangazeia (based in 1601). In XVIIth century Enets have been a portion yasak Mangazeia population [1]. The terminal time formation of this little north population was XVIIth century. At the end of second half of the XVIIth century-beginning of XVIIIth century Enets had been forced by their south and west neighbours from their basin Taz- and Turukhan-rivers territories and were leaving for North-East, right bank of the river of Yenissei. They started sharing a territory with nganasans and a portion of them joined and assimilated aborigines. Their economy was complicated with the emphasis on wild reindeer hunting by the influence of nganasans as their "relatives" whom they shared a territory with. Low Yenis-sei tundra and forest-tundra have been abundant with wonderful places of fishing, berry-places, wild reindeer, partridges and poultry and sheltered by the Enetz thoroughly [2, 4, 8, 10] Evenks (non-autochthons of Taymyr) historically and ethnically are connected with Evenkia where they by small groups or families have come to Taymir from. A few ethnic Evenk group inhabited south of Taymir, in the foothills of and in the Putorana Mountains, Khantaiskoie-lake basin. They roamed here from Evenkia which had intensively been dwelling by Russian merchants and amount of sable had decreased. In the end of XIXth beginning of XXth century Evenks were the very reserved nomadic group, engaging in a hunt, fishing and reindeer husbandry. But exclusive commodity occupation was hunting (arctic foxes and wild reindeer). They no more than two-three onetime per a year went out on the trading post of Plakhino for the fur sale and purchase of all