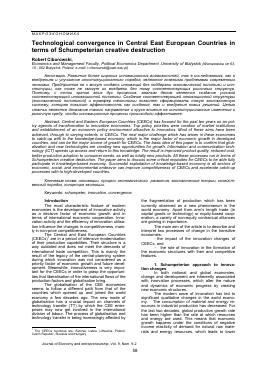 Abstract. Central and Eastern European Countries (CEECs) has focused for the past ten years on an policy agenda of transformation to innovative economies. Top policy priorities were creation of market institutions and establishment of an economic policy environment attractive to innovators. Most of these aims have been achieved, through to varying extents, in CEECs. The next major challenge which has arisen in these economies to catch-up with to the knowledge-based economy, which is the major factor of economic growth in developed countries, and can be the major source of growth for CEECs. The basic idea of this paper is to confirm that globalization and new technologies are creating new opportunities for growth. Information and communication technology (ICT) speeds up access and return to this knowledge. The result is improved product quality, reduced cost, better production adoption to consumer needs, as well as totally new products. All these processes run in terms of Schumpeterian creative destruction. The paper aims to discuss some critical requisites for CEECs to be able fully participate in knowledge-based economy. Successful exploitation of knowledge-based economy in all sectors of economic, social, and environmental endeavor can improve competitiveness of CEECs and accelerate catch-up processes with to high-developed countries.

The most characteristic feature of modern economies is the development of innovative activity as a decisive factor of economic growth and in terms of international economic cooperation. Innovation activity and the efficiency of innovation utilisation influence the changes in competitiveness, mainly in non-price competitiveness.

The Central and East European Countries (CEECs)1 are in a period of intensive modernisation of their production capabilities. Their structure is a way outdated and does not meet the demands of international trade competition. This is mainly the result of the legacy of the central-planning system during which innovation was not considered as a priority factor of economic growth and future development. Meanwhile, innovativeness is very important for the CEECs in order to grasp the opportunities that liberalisation of the international flows of the production factors and globalisation bring.

the fragmentation of production which has been currently observed as a new phenomenon in the world economy. Apart from arm's length trade (in capital goods or technology) or equity-based cooperation, a variety of non-equity contractual alliances are gaining in importance.

The main aim of the article is to describe and interpret two processes of change in the transitive economies:

- the impact of the innovation changes of CEECs, and

- the role of innovation in the formation of the economic structures with their and competitive features.

In both national and global economies, change and development are inherently associated with innovation processes, which alter the nature and dynamics of economic progress by creating new economic structures.

The modern wave of innovation has led to significant qualitative changes in the world economy. The consumption of material and energy resources in industrial production has decreased. For the last two decades, global production growth rate has been higher than the rate at which resources and energy are used. This means that economic growth happens under the conditions of negative income elasticity of demand for natural raw materials and energy resources, which leads to lower

demand for these goods in the global economy, thus undermining the income of countries which specialise in exporting them.

Thanks to technology diffusion, an equalisation of technical capabilities is taking place in enterprises located in different countries, which results in increasing technological parity. At the national level, a similar tendency can be observed, referred to as technological convergence, or 'catch-up'. In the process of technology diffusion, a key role is played by transnational corporations, which achieve it through a geographical integration of dispersed R&D functions/operations and a subordination of these functions to the global strategies of their mother companies.

The last decade of research into the nature and causes of global economic growth has confirmed that technical 'catch-up' and increased productivity are not autonomous processes, but depend on tangible and intangible investment in education, R&D, and related activity [Fagerberg, 1988, p. 102]. These factors have become the foundation for successful narrowing of the technological and productivity gaps by some developing countries. However, not all developing economies have succeeded in the same way, because of lack of automatism and stability in international diffusion of innovation [Bell, Pavitt, 1993, pp. 168-170]. The tangible factors used for economic development are limited in their scope of action, which lowers their effectiveness. Core knowledge is broadened by experience, attempts, side effects, learning-by-doing, and routine learning [Dosi, Teece, Chytry, 1998, p. 290], to spread subsequently across enterprises by means of training courses, new activities, experimental research and trials. This leads to differences in technical accumulation and further to technology gaps which define particular levels of economic development.

The changes embodied in innovation are a key development factor. '... innovation, as conceived by us, is at the center of practically all the phenomena, difficulties, and problems of economic life' [J.A.Schumpeter, 1939, p.87].

The Schumpeterian approach to innovation processes focused on the supply side, which allowed him to restrict his perception of technological progress to the purely technical aspects of R&D. He identified, therefore, technological progress with an increase in global productivity of production factors, that is with a situation when production growth is greater in comparison with the growth of expenditures.

Innovations, identified with technological progress, have - like labour and capital - their own independent productivity. From the formal perspective of production functions this means that product growth is possible without increasing labour or capital inputs. In this case, productivity is measured by the end product.

Innovations are stimulated by technical possibilities, while changes in productivity by increases or decreases in innovativeness, i.e. supply factors. On a macroeconomic scale, this causes the development of those branches where capital productivity growth is becoming increasingly easier and less costly (it lessens the effect of the law of diminishing returns). Moreover, the pool of available production techniques which serves as the basis for investment growth remains undepleted.

On a microeconomic scale, the supply approach implies that it is the R&D staff that initiate innovative patterns. They search for ways of commercialising the effects of innovation, which has two significant consequences:

- Enterprises with stronger R&D capacity have an edge over those which have a smaller R&D potential because a higher number of research workers are better able to take advantage of progress in the area of basic research for economic purposes;

- Assuming that the R&D potential is similar, innovative activity will be greater in those fields in which appropriate scientific background (in basic research) develops faster.

The supply approach was introduced into the theory of innovation by Schumpeter and taken up by, among others, Nathan Rosenberg and Simon Usher [Rosenberg, 1971, pp. 43-72]. The entrepreneurs who expect future benefits, take the risk of implementing innovations based on invention and carry out necessary investments in innovative undertakings. By changing the structure of the market, innovation rewards innovating companies with temporary monopolies and enhanced profits. Then, new innovators emerge, which ensures a diffusion of technological progress and does away with privileged firm