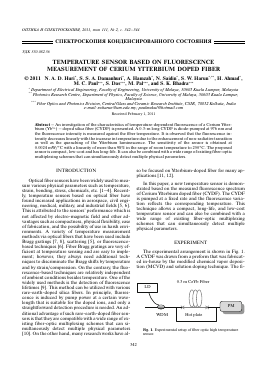 Abstract — An investigation of the characteristics of temperature-dependent fluorescence of a Cerium Ytterbium (Yb3+) — doped silica fiber (CYDF) is presented. A 0.3-m long CYDF is diode-pumped at 976 nm and the fluorescence intensity is measured against the fiber temperature. It is observed that the fluorescence intensity decreases linearly with the increase in temperature due to the enhancement of non-radiative transition as well as the quenching of the Ytterbium luminescence. The sensitivity of the sensor is obtained at 0.0024 mW/°C with a linearity of more than 98% in the range of room temperature to 250°C. The proposed sensor is compact, low-cost and has long-life. It can also be combined with a wide range of existing fiber-optic multiplexing schemes that can simultaneously detect multiple physical parameters.

Optical fiber sensors have been widely used to measure various physical parameters such as temperature, strain, bending, stress, chemicals, etc. [1—4]. Recently, temperature sensors based on optical fiber have found increased applications in aerospace, civil engineering, medical, military, and industrial fields [5, 6]. This is attributed to the sensors' performance which is not affected by electro-magnetic field and other advantages such as compactness, physical flexibility, ease of fabrication, and the possibility of use in harsh environments. A variety of temperature measurement methods via optical fibers that have been used include Bragg gratings [7, 8], scattering [5], or fluorescence-based techniques [6]. Fiber Bragg gratings are very efficient at temperature sensing and are easy to implement; however, they always need additional techniques to discriminate the Bragg shifts by temperature and by strain/compression. On the contrary, the fluorescence-based techniques are relatively independent of ambient conditions besides temperature. One of the widely used methods is the detection of fluorescence lifetimes [9]. This method can be utilized with various rare-earth-doped silica fibers. In principle, fluorescence is induced by pump power at a certain wavelength that is suitable for the doped ions, and only a straightforward detection procedure is needed. An additional advantage of such rare-earth-doped fiber sensors is that they are compatible with a wide range of existing fiber-optic multiplexing schemes that can simultaneously detect multiple physical parameters [10]. On the other hand, many research works have al-

so be focused on Ytterbium-doped fiber for many applications [11, 12].

In this paper, a new temperature sensor is demonstrated based on the measured fluorescence spectrum of Cerium Ytterbium doped fiber (CYDF). The CYDF is pumped at a fixed rate and the fluorescence variation reflects the corresponding temperature. This technique allows a compact, long-life, and low-cost temperature sensor and can also be combined with a wide range of existing fiber-optic multiplexing schemes that can simultaneously detect multiple physical parameters.

The experimental arrangement is shown in Fig. 1. A CYDF was drawn from a preform that was fabricated in-house by the modified chemical vapor deposition (MCVD) and solution doping technique. The fi-

ber has a Ce and Yb co-doped core of a 9 ^m diameter and a numerical aperture (NA) of 0.16. The concentration of Ytterbium ions is 1000 ppm. A 0.3 m long YDF was used in the experiment. This length was chosen experimentally by trial and error to enable sufficient fluorescent power as well as adequate pump absorption. The CYDF section was kept in a temperature controlled oven, which allows us to vary the fiber temperature within 25 to 250°C interval. A laser diode emitting at 976 nm was used to excite Yb ions and generate fluorescence. The fluorescence signal from the forward pumped CYDF is then measured using an optical spectrum analyzer and power meter.

Figure 2 shows the emission spectra of the CYDF with respect to temperature when the pump power is fixed at 380mW. It can be seen that the intensity of the fluorescence peaks at a wavelength line of 1033 nm and the peak power decreases with temperature. This wavelength is the fluorescence line, which corresponds to band gap energy within the manifolds of 2F5/2 level and the terminal level of 2F7/2. When the CYDF is pumped with the photon energy of 976 nm, the ions will jump up to excited state (2F5/2) of Ytterbium energy level from the ground state (2F7/2). The population inversion between 2F5/2 and 2F7/2 levels is responsible for the emission of fluorescence at this wavelength region. As shown in Fig. 2, the amplified spontaneous emission peak power reduces from —45 dBm to —48 dBm as the temperature increases from a room temperature of 25° to 250°C. The temperature dependent changes in the intensity of the fluorescence arise due to the temperature dependence of non-radiative transition rates of the energy level. The peak wavelength of emission at 1033 nm region is also observed to be slightly changed with temperature as shown in Fig. 2.

The sensitivity of the sensor is obtained at 0.0024 ms/°C with a linearity of more than 98%. The fluorescence power reduction observed is attributed to the enhancement of non-radiative transition and a quenching effect with temperature. The proposed sensor uses only 0.3-m long CYDF as a sensor head and thus allows a compact, long-life, and low-cost temperature measurement. This scheme can also be combined with a wide range of existing fiber-optic multiplexing schemes that can detect multiple physical parameters simultaneously.