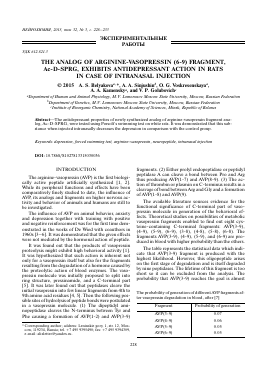 THE ANALOG OF ARGININE-VASOPRESSIN (6-9) FRAGMENT, Ac-D-SPRG, EXHIBITS ANTIDEPRESSANT ACTION IN RATS IN CASE OF INTRANASAL INJECTION

Abstract—The antidepressant properties of newly synthesized analog of arginine-vasopressin fragment analog, Ac-D-SPRG, were tested using Porsolt's swimming test on white rats. It was demonstrated that this substance when injected intranasally decreases the depression in comparison with the control group.

The arginine-vasopressin (AVP) is the first biologically active peptide artificially synthesized [1, 2]. While its peripheral functions and effects have been comparatively finely studied to date, the influence of AVP, its analogs and fragments on higher nervous activity and behavior of animals and humans are still to be investigated.

The influence of AVP on animal behavior, anxiety and depression together with training with positive and negative reinforcement was for the first time demonstrated in the works of De Wied with coauthors in 1960s [3—6]. It was demonstrated that the given effects were not mediated by the hormonal action of peptide.

It was found out that the products of vasopressin proteolysis might exhibit high behavioral activity [1]. It was hypothesized that such action is inherent not only for a vasopressin itself but also for the fragments resulting from the degradation of a hormone caused by the proteolytic action of blood enzymes. The vaso-pressin molecule was initially proposed to split into ring structure, pressinamide, and a C-terminal part [5]. It was later found out that peptidases cleave the initial vasopressin into few linear fragments from 4th to 9th amino acid residues [4, 5]. Then the following possible sites of hydrolysis of peptide bonds were postulated in a vasopressin molecule. (1) The dipeptidyl ami-nopeptidase cleaves the N-terminus between Tyr and Phe causing a formation of AVP(1-2) and AVp(3-9)

fragments. (2) Either prolyl endopeptidase or peptidyl peptidase A can cleave a bond between Pro and Arg thus producing AVP(1-7) and AVP(8-9). (3) The action of thrombin or plasmin on C-terminus results in a cleavage of bond between Arg and Gly and a formation of AVP(1-8) and AVP(9).

The available literature sources evidence for the functional significance of C-terminal part of vaso-pressin molecule in generation of the behavioral effects. Theoretical studies on possibilities of metabolic vasopressin fragments enabled to find out eight cys-teine-containing C-terminal fragments: AVP(3-9), (4-9), (5-9), (6-9), (3-8), (4-8), (5-8), (6-8). The fragments AVP(3-9), (4-9), (5-9), and (6-9) are produced in blood with higher probability than the others.

The table represents the statistical data which indicate that AVP(3-9) fragment is produced with the highest likelihood. However, this oligopeptide arises on the first stage of degradation and is itself degraded by nine peptidases. The lifetime of this fragment is too short so it can be excluded from the analysis. The probability that AVP(3-9) reaches the goal is almost

The probability of generation of different AVP fragments after vasopressin degradation in blood, after [7]

zero [7]. Oppositely, the formation ofAVP(6-9) occurs due to activity of a single enzyme, dipeptidyl ami-nopeptidase I, which cleaves the N-terminal part of AVP(4-9) fragment. On the one hand, the likelihood of AVP(6-9) formation in blood is high enough. On the other hand, it is degraded with five peptidases only, so the efficient reaching the goal is possible enough [7].

The metabolic fragments of vasopressin are known to possess the neurotropic activity which is comparable (or often exceeds) the one of an intact molecule. These oligopeptides stimulate behavioral characteristics, improve training efficiency and memory [8, 9]. It was earlier demonstrated that the most expressed neurotropic effect characterizes the fragment AVP(6-9): Cys6-Pro7-Arg8-Gly9-NH2 [10]. To obtain the new analog with an expressed nootropic action in small doses, it is desirable to synthesize a peptide with Cys6 substituted with another amino acid. Such modification can enhance the resistance of a molecule against blood peptidases. Search for biologically active was carried out with a special reference to link between structure and activity, involving elements of effector-receptor interactions. Combination of two methods (isolation of biologically active conformation and active fragments of peptide regulators) enables to obtain the substances with a predictable profile of action. As a result of a conducted analysis, the tetrapeptide with Cys6 replaced with D-Met (Ac-D-MPRG) was synthesized. Studies on its action demonstrated that its intranasal injection in small doses in animals leads to the increased exploratory behavior, decreased anxiety and depression together with accelerated training with both negative and positive reinforcement [11, 12]. Replacement of C-terminal Cys with D-Met in AVP led to production of new peptide with an expressed nootropic action, which exhibits its effect in case of intranasal injections in minute doses.

During the presented stage of research, the C-ter-minal cysteine in AVP fragment was replaced with D-serine. We studied the influence of the obtained analog, Ac-D-SPRG, on depression characteristics of animals in case of a single intranasal injection.

Animals. The work was carried out using the pubescent males of non-linear white rats with weight of 220—250 g. Every group included averagely 18 animals. All animals were housed in groups of ten individuals in plastic containers with iron lattice, on a 12:12-h light-dark schedule in a temperature-controlled (22° C) chamber. All rats were freely supplied with water and food.

Forced swimming test. The degree of depression was studied in the "forced swimming" test [13, 14] with some modifications. The animals were not subjected to a pre-test before the test itself. Every animal was placed in a center of a plastic cylindrical container

The following behavioral patterns were recognized:

(1) immobilization — a rat was floating in water without active movements except for rare singular strokes which enable rat's head to be kept above water level;

After a swimming, the animals were removed from the basin, dubbed with towel and placed into a heated cage for 20—25 min.

Locomotor activity. The locomotor activity and physical endurance were scored in the experimental apparatus comprising the vertical nylon bed with cells of 1.5 x 1.5 mm and total area of 30 x 60 cm. This bed is boarded with wooden panels from above and on all perimeters. Every animal was placed on the bed, and the time between this placement and drop was scored. This time was measured three times. A total duration for three repeats was estimated as a measure of endurance.

Drug treatment. The Ac-D-SPRG was injected in-tranasally [15, 16] in doses of 0.01, 0.1, 1.0, and 10.0 ^g/kg in a volume of 1 ^L per 10 g of body mass 5, 15, and 30 min before tests. The control animals were treated with an equivalent volume of solvent (distilled water). According to available data on dynamics of AVP accumulation in blood after intranasal injection, the highest concentration of AVP in serum is achieved in 20—30 min after administration [16]. After 5 min, the concentration of AVP in serum comprises about half-maximum, so we have chosen these intervals as informatory.

The intranasal way of injection was chosen for more rapid delivery of the peptide into a brain avoiding hematoencephalic barrier [15]. Except this, the given mode of injection is the least stressful which is important for studies on the behavioral reactions in animals.

Statistical analysis. For statistical treatment, the standard methods of analysis were applied. The non-parametrical Mann—Whitney test was used. The results were treated with Statistica 6.0 software package and MS Excel.