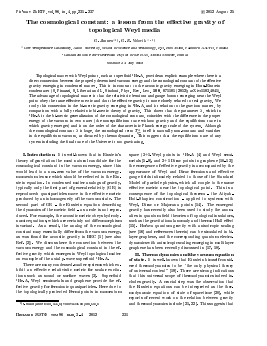 The cosmological constant: a lesson from the effective gravity of

Topological matter with Weyl points, such as superfluid 3He-A, provide an explicit example where there is a direct connection between the properly determined vacuum energy and the cosmological constant of the effective gravity emerging in condensed matter. This is in contrast to the acoustic gravity emerging in Bose-Einstein condensates (S. Finazzi, S. Liberati and L. Sindoni, Phys. Rev. Lett. 108, 071101 (2012); arXiv:1103.4841). The advantage of topological matter is that the relativistic fermions and gauge bosons emerging near the Weyl point obey the same effective metric and thus the effective gravity is more closely related to real gravity. We study this connection in the bi-metric gravity emerging in 3He-A, and its relation to the graviton masses, by comparison with a fully relativistic bi-metric theory of gravity. This shows that the parameter A, which in 3He-A is the bi-metric generalization of the cosmological constant, coincides with the difference in the proper energy of the vacuum in two states (the nonequilibrium state without gravity and the equilibrium state in which gravity emerges) and is on the order of the characteristic Planck energy scale of the system. Although the cosmological constant A is huge, the cosmological term itself is naturally non-constant and vanishes in the equilibrium vacuum, as dictated by thermodynamics. This suggests that the equilibrium state of any system including the final state of the Universe is not gravitating.

I. Introduction. It is well-known that in Einstein's theory of gravitation the most natural candidate for the cosmological constant is the vacuum energy, since this would lead to a non-zero value of the vacuum energy-momentum tensor which should be reflected in the Einstein equation. In condensed matter analogs of gravity, typically only the first part of general relativity (GR) is reproduced: quasiparticles move in the effective metric produced by an inhomogeneity of the vacuum state. The second part of GR - the Einstein equation describing the dynamics of the metric field - as a rule is not reproduced. For example, the acoustic metric obeys hydrody-namic equations, which are certainly not diffeomorphism invariant. As a result, the analog of the cosmological constant may essentially differ from the vacuum energy, as was found for acoustic gravity in BEC [1] (see also Ref. [2]). We discuss here the connection between the vacuum energy and the cosmological constant in the effective gravity which emerges in Weyl topological matter on example of the axial p-wave superfluid 3He-A.

There are many condensed-matter systems which exhibit an effective relativistic metric for scalar excitations such as sound or surface waves [3]. Superfluid 3He-A, Weyl semimetals and graphene provide the effective gravity for fermionic quasiparticles. Here due to the topologically protected Fermi points in momentum

space (3—1-Weyl points in 3He-A [4] and Weyl semimetals [5-9], and 2+1 Dirac points in graphene [10-13]) the emergence of effective gravity is accompanied by the appearance of Weyl and Dirac fermions and effective gauge fields intimately related to those of the Standard Model of particle physics, which all couple to the same effective metric near the topological point. This is a consequence of the topological theorem - the Atiyah-Bott-Shapiro construction - applied to systems with Weyl, Dirac or Majorana points [14]. The emergent gravity has recently also been used to study the anomalies in quantum field theories of topological insulators, such as the gravitational anomaly and thermal Hall effect [15]. Horava quantum gravity with anisotropic scaling (see [16] and references therein) can be simulated in bi-layer graphene, and the corresponding quantum electrodynamics with anisotropic scaling emerging in multilayer graphene has been recently discussed in [17, 18].

thermodynamics could well play a crucial role for the cosmological constant problem and its relation to the vacuum energy as well [23].

For a Lorentz invariant vacuum, pvac = ^Pvac is the only possible equation of state as a perfect fluid, and so one can immediately see from the thermodynamic Gibbs-Duhem relation

(with s the specific entropy and the temperature T = 0 in the vacuum) that the relevant thermodynamic quantity, which plays the role of the vacuum energy is the analog of grand-canonical energy pvac = e(^) - ^¡qide/dqi. Any conserved quantity Qi, which characterizes the quantum vacuum, should be explicitly taken into account together with its corresponding Lagrange multiplier And indeed it is demonstrated that the quantity which enters the cosmological term in Einstein equations is the density of the grand-canonical energy, pvac, rather than the energy density c [22-24].

By reversing the above argument, one sees that the vacuum equation of state pvac = —Pvac is more generally valid [23]. The energy of the vacuum of quantum fields emerging in a many body condensed matter system is the grand canonical energy pvac = e(n) — nde/dn, where the particle density N = nV is a conserved quantity and the corresponding Lagrange multiplier is the chemical potential fi = de/dn. The use of the grand canonical energy here corresponds to the fact that the many-body Hamiltonian in second quantization is hqft = h —pn, where H is obtained from the Schrodinger many-body Hamiltonian and N is the number operator. The cosmological equation of state w = P/p for the vacuum energy is then again w = —1 due to the Gibbs-Duhem relation, regardless of the Lorentz invariance or not of the vacuum.

Bi-metric gravity in systems with Weyl points. Gravity in superfluid 3He-A is bi-metric, with g^v the effective dynamical gravitational field acting on the quasiparticles (the Weyl fermions) and gjt°J its value in the equilibrium vacuum state. The effective spacetime emerging for quasiparticles is anisotropic due to the uni-axial anisotropy of the broken symmetry superfluid state:

Here, c±o is the "speed of light" in the direction perpendicular to the anisotropy axis (the limiting speed for "rel-ativistic" quasiparticles propagating in that direction),

and appears as the amplitude of the equilibrium order parameter in the symmetry breaking phase transition from the normal liquid 3He to 3He-A. cy is the "speed of light" propagating along the anisotropy axis. One may say that in 3He-A gravity appears as a result of the broken symmetry. Note that cy is already present in the normal state of liquid 3He. In the weak-coupling BCS theory one has cj_o/c|| -C 1 with cj_o/c|| ~ 10-3 in 3He-A. Therefore cy is completely fixed in the low-energy corner where the relativistic quasiparticles emerge. Also note that this anisotropy cannot be detected by internal observers who only dispose of such relativistic quasiparticles to construct rods and clocks with which to effect measurements [4, 27, 28].

We stress that the same effective metric is relevant both for the relativistic fermions emerging in the vicinity of the Weyl points and for the gauge bosons, which also emerge in the vicinity of the Weyl points. Thus the effective gravity in 3He-A couples universally and interacts with all matter in the same way. This is ultimately a consequence of the Attiyah-Bott-Shapiro topological theorem [29]. This construction guarantees that the low-energy fermionic modes close to the manifold of zeroes in their energy spectrum (the generalized Fermi surface) exhibit relativistic invariance in the directions transverse to the surface [14]. Lorentz invariance in fermionic systems is therefore obtained in all directions in case the spectrum is characterised by a topologically protected point node: the Fermi point (Weyl, Dirac or Majorana point) [14, 30, 31]. The effective spacetime emerges as a consequence of the topological universality class, not of its specific realisation, and it is therefore independent of the concrete background metric. Thus, in spite of the (non-relativistic) background structure (the Helium atoms), the effective theory for the quasi-matter obeys both background independence (at least, at the kine-matical level2)) and the equivalence principle. Both are broken at the trans-Planckian level, as occurs in many scenarios for quantum gravity.

The grand canonical energy which governs the transition from normal liquid 3He to superfluid 3He-A represents the analogue of the Ginzburg-Landau energy, and can be obtained from the p-wave pairing model in BCS theory. Let us first consider the perturbations of the metric which preserve the structure of the equilibrium metric and correspond to a variation of c± only, i.e. we consider a non-equilibrium metric of the type

Evidently, as remarked above, the dynamical equations of the effective metric are not covariant. However, the energy-momentum tensor in the effective theory nevertheless satisfies a generalized conservation