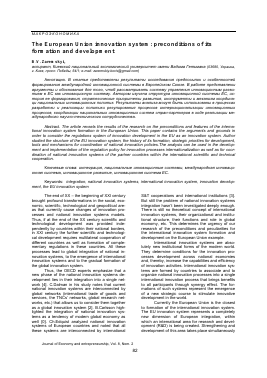 ﻿The European Union innovation system: preconditions of its formation and development

Currently the European Union is the closest to formation of the international innovation system. The EU innovaton system represents a completely new dimension of European integration, within which an international area for research and development (R&D) is being created. Strengthening and development of this area takes place simultaneously

with the deepening of economic integration between European countries and is the result of the internationalization of innovation processes.

The transition from national to joint science and technology (S&T) policy as well as creation of appropriate institutional system for innovation development within EU take place gradually as an essential part of a common European economic policy. These processes are facilitated by a number of historical, civilizational, political, socio-economic and institutional preconditions.

Among the internal preconditions for national innovation systems (NIS) integration there should be empesized the following:

1) The existence of common socio-economic problems that can be solved only through convergence of national strategies and policies;

2) A high level of economic development and economic integration in EU that results in formation of a developed internal European market;

3) An advanced legal system - a pan-European legislation regulating the institutional processes and cooperation between member states;

4) A high level of political consolidation between the EU members, the stability of the political relations between them as well as a commitment to the idea of international cooperation in Europe;

5) A developed system of specialized and universal political institutions at both the national and the supranational level, which effectively regulates the relations between the countries in various fields of social and economic relations.

The external preconditions are:

1) An increased competition in world markets, including the strengthening of the innovation competition that has created new challenges for the EU member states;

2) The emergence of new players (China, South Korea, Singapore, etc.) on the world stage that offer more competitive products and provide much higher level of the economic growth. These tendencies endanger not only the economic but also the political positions of the EU;

3) An acceleration of the technological development pace requires the consolidation of the various countries in order to diversify the sources of financing and risk sharing.

Some basics of joint S&T policy in Europe were laid in the 1950s through signing of the European Coal and Steel Community Treaty (1951) and the European Atomic Energy Community Treaty (1957). These agreements were provided the facilitating of R&D cooperation in some sectors of the economy to face the increased competition in world markets, increasing dependency of community members on foreign energy supplies, increasing political influence of the Soviet Union and others. The European Community Treaty (1957) extended the limits of the joint S&T policy over all sectors of the economy. It provided a variety of programs to support R&D cooperation, international spread of R&D results, to stimulate learning and mobility of researchers and other measures to facilitate innovation development. These agreements formed the

initial basis for the formation of a joint S&T space in the EU.

The wide process of national science and technology policies convergence began only in the mid 1980s by the introduction of the first Framework Programme (1984) and by the definition of common objectives and measures for S&T development of countries participating in the Single European Act (1987). In the mid 1990s, a network of Innovative Regions in Europe (IRE) was created. The purpose of this network was to facilitate the exchange of best practices and experience of European regions, to strengthen their capacity in supporting innovations and competitiveness through the development and implementation of regional innovation strategies [3].

Since 2000, the EU started integration of national innovation systems, which includes the formation of a unified European research area and a common innovation system. In this context, in March 2000 the European Council set out a single coordinated plan for the development of the European economy for 2000 - 2010 known as the Lisbon Strategy or the Lisbon Agenda or Lisbon process. The objective of this strategy was to make the EU the most competitive and dynamic knowledge-based economy in the world capable of sustainable economic growth with more and better jobs and greater social cohesion. In general, countries have adopted national strategies and more specific programs of reforms (under different names in different countries) linked to the Lisbon strategy.

Despite its poor results the Lisbon strategy lounched the formation of the EU innovation system and improvement of all economic policy areas -there was developed a range of political measures and new management principles to stimulate innovation development in different economic areas. Another positive result lies in achieving of a European consensus on key areas of structural and institutional reforms as well as recognizing the need to achieve solidarity in addres