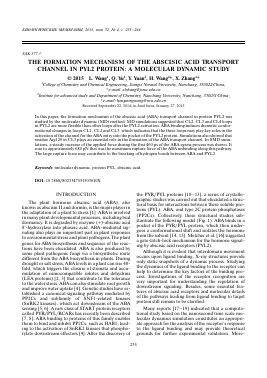 THE FORMATION MECHANISM OF THE ABSCISIC ACID TRANSPORT CHANNEL IN PYL2 PROTEIN: A MOLECULAR DYNAMIC STUDY

In this paper, the formation mechanism of the abscisic acid (ABA) transport channel in protein PYL2 was studied by the molecular dynamic (MD) method. MD simulations suggested that CL2, CL3 and CL4 loops in PYL2 are more flexible than other loops after the PYL2 activation. ABA binding induces dramatic conformational changes in loops CL2, CL2 and CL3, which indicates that the three loops may play key roles in the activation of the channel for the ABA entry into the pocket of the PYL2 protein. Simulations also showed that residue Arg120 in CL3 plays an essential role in the formation of the ABA transport channel. In SMD simulations, a steady increase of the applied force during the first 400 ps of the ABA egress process was shown. It rose to approximately 680 pN that was the maximum rupture force of the ABA unbinding along this pathway. The large rupture force may contribute to the breaking of hydrogen bonds between ABA and PYL2.

The plant hormone abscisic acid (ABA), also known as abscisin II and dormin, is the major player in the adaptation of a plant to stress [1]. ABA is involved in many plant developmental processes, including bud dormancy. It is degraded by enzyme (+)-abscisic acid 8'-hydroxylase into phaseic acid. ABA-mediated signaling also plays an important part in plant responses to environmental stress and plant pathogens.The plant genes for ABA biosynthesis and sequence of the reactions have been elucidated. ABA is also produced by some plant pathogenic fungi via a biosynthetic route different from the ABA biosynthesis in plants. During drought or salt stress, ABA levels in a plant can rise 40fold, which triggers the closure of stomata and accumulation of osmocompatible solutes and dehydrins (LEA proteins) [2, 3] that contribute to the tolerance to the water stress. ABA can also stimulate root growth and improve water uptake [4]. Genetic studies have established a canonical signaling pathway mediated by PP2Cs and subfamily of SNFl-related kinases (SnRK2 kinases), which act downstream of the ABA sensing [5, 6]. A new class of START protein receptors called PYR/PYL/RCARs has recently been described [7, 8]. ABA binding to proteins of this family enables them to bind and inhibit PP2Cs, such as HAB1, leading to the activation of SnRK2 kinases that phospho-rylate downstream effectors [9]. After the discovery of

the PYR/PYL proteins [10—13], a series of crystallo-graphic studies was carried out that elucidated a structural basis for interactions between these soluble proteins (PYL), ABA, and type 2C protein phosphatases (PP2Cs). Collectively, these structural studies substantiate the following model (Fig. 1): ABA binds in a pocket of the PYR/PYL protein, which then undergoes a conformational shift and isolates the hormone from the solvent [14, 15]. Melcher et al. [16] suggested a gate-latch-lock mechanism for the hormone signaling by abscisic acid receptors (PYL2).

Although it is evident that interdomain movement occurs upon ligand binding, X-ray structures provide only static snapshots of a dynamic process. Studying the dynamics of the ligand binding to the receptor can help to determine the key factors of the binding process. Investigations of the receptor recognition are very important for understanding the regulation of downstream signaling. Besides, some essential features of abscisic acid receptors and molecular details of the pathways leading from ligand binding to target protein still remain to be clarified.

Many reports [17—19] indicated that a computational study based on the nanosecond time scale molecular dynamics simulation constitutes an appropriate approach for the analysis of the receptor's response to the ligand binding and may provide theoretical grounds for further experimental validation. More-

over, molecular dynamics simulation is a powerful tool for monitoring the structural evolution of biomole-cules [20—23]. Using a suitable model, one can obtain a time series of structures and the trajectory that can reveal interesting conformations, which are not easily observed in experiments. In addition, the steered molecular dynamic (SMD) can provide an atomic-level method for investigation of the dynamics of the binding/unbinding events by computer simulations [24— 27]. The SMD method have been widely and successfully used to explore the binding and unbinding properties of biomolecules and their responses to external mechanical manipulations; in particular, this method can be applied for studies of ligand binding pathways and elastic properties of a protein. In this paper, we used molecular dynamic simulations to explore changes in the conformational dynamics of the ABA binding with protein PYL2 and mechanisms of the formation of the ABA transport channel in the PYL2 protein. Besides, the dynamics of the ABA unbinding from the ABA—PLY2 complex was studied by the SMD calculations. These simulations provided an insight into the mechanisms of the opening and closing of the ABA transport channel.

All calculations were carried out using the GROMACS 4.04 package [28] and OPLS all-atom (OPLS-AA) protein force field [29]. The components of simulation boxes for the given systems are listed in the table. Crystal structures for ABA-PYL2 (3KDH) and apo-PYL2 (3KDI) were downloaded from www.rcsb.org. A steepest-descent algorithm was applied to minimize the energy of each system and to simulate relaxation of water molecules. Molecular dynamics simulation for each system was carried out in two stages. At the first stage, position-restrain simulation was conducted, in which the atoms of the protein molecule were held fixed, whereas the water molecules were free to move around, so that they would reach the equilibrium state. At the second stage, each system was simulated with a time step of 0.2 fs. Electrostatic interactions were computed using PME; a cutoff of10 A was used for the van der Waals interactions. Bonds involving hydrogen atoms were restrained using LINCS [30], and the SPC water model was used [31]. The atoms in the system were given initial velocities according to the Maxwell— Boltzmann distribution at 300°C. To maintain a constant temperature and pressure for various components during simulations, the Berendsen coupling algorithm was applied for each component of the system with relaxation times of 0.1 and 0.5 ps, respectively.

* The initial structure is based on 3KDI, with the ligand removed and replaced by water molecules.

Fig. 2. Snapshots of apo-PYL2 (a) and ABA-bound PYL2 (b) taken at the last time point (t = 6.0 ns) of the simulation and RMS deviations between the initial structure and the last one (c).

SMD is an extended MD simulation method that mimics the principle of AFM [32, 33]. In this work, SMD simulations were performed on the equilibrated systems obtained. In SMD simulations, an external force is applied to permit a system to overcome barriers in a shorter time than in MD simulations. To map possible movements of PYL2 ensuring the ABA transport, a soft spring rather than a stiff spring was assigned to the ligand. Initial simulations were carried out with different force constants k ranging from 500 to 2000 kJ mol-1 nm-2 and pulling velocities v ranging from 0.001 to 0.1 A ps-1. The force constant for the spring and pulling velocity were set finally to 1000 kJ mol-1 nm-2 and 0.01 A ps-1, respectively. The same values were selected in previous studies [34, 35]. The pulling direction was along the Z-axis.

First, we have run two simulations, for apo-PYL2 and ABA-bound PYL2, to examine effects of the ABA binding on the structure and dynamics of the protein. We also wanted to explore this aspect further in terms of the CL2- and CL3-loop domain motions and see how the motion of these domains was influenced by the ligand (Fig. 1). Figure 2 gives the snapshots of apo-PYL2 and ABA-PYL2 at 6 ns. The root mean square deviations (RMSD) with respect to the initial structure for the two simulations are shown in Fig. 3. For both simulations, after an initial rise, the Ca RMSD reached plateau at 1.5 A and 1.1 A after 500 ps for ABA-bound PYL2 and for apo-PYL2, respectively, which indicates that ABA-bound PYL2 reached stable values very fast. RMSDs for apo-PYL2 stabilized more slowly. Figure 2 presents the last snapshots from simulations of apo-PYL2 and ABA-bound PYL2 at the time of 6 ns. We can easily find that the conformation of ABA-PYL2 at 6.0 ns is very similar to the crystal structure reported in literature [16]. The conformation of apo-PYL2 at 6.0 ns considerably differes from that of ABA-PYL2 in CL2, CL3 and CL4 loop domains.

Comparison of apo-PYL2 with ABA-PYL2 (Fig. 2) reveals a clear difference between them. In apo-PYL2, due to the