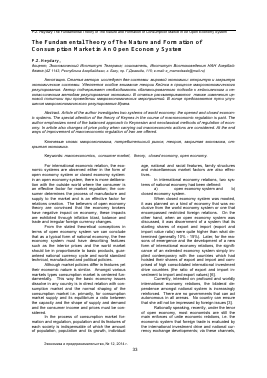 For international economic relation, the economic systems are observed either in the form of open economy system or closed economy system: in an open economy system, there is more deliberation with the outside world where the consumer is an effective factor for market regulation; the consumer determines the process of manufacture and supply to the market and is an effective factor for relations creation. The believers of open economy theory are convinced that the economy brokers have negative impact on economy, these impacts are exhibited through inflation blast, balance and trade and irregular foreign currency changes.

From the stated theoretical conceptions in terms of open economy system we can conclude that as a typical form of national economy, the free economy system must have describing features such as the interior prices and the world market should be in proportionate to basic products, guaranteed national currency cycle and world standard technical, manufactured and political policies.

a) open economy system and b)

Currently, intended on profound and worldly international economy relations, the bilateral dependence amongst national system is increasingly reinforced. There are no governments that can act autonomous in all arenas. No country can ensure that she will not be impressed by foreign issues [3].

Rationally speaking, recently, under the tenor of open economy, most economists are still the main enforces of untie economic relations, i.e. the economic system that foreign trade is evaluated by the international investment drive and national currency exchange developments; via these channels,

the issues are studied and macroeconomic policies are set to play their significant role.

Until late 1960s of the twentieth century, its models that were designed by the government on the basis of Keynes's theory of economy regulation knew the favorability of open economy theory. The model designers of Keynes's free economy theory distinguished foreign trade a substantial and recommended these for fundamental basis of government macro economy and in the application of Keynes's activity collection of regulatory principles.

Still, during the years 1960 and 1970 of the twentieth century, by the effect of world economy system development concurrent with the development of economic relations criterion between various economies in these traits, important qualitative changes had also occurred. Contemporary with foreign trade, performance of investment drive in the currency market also played an essential role in the international economy relations. Being such, in that epoch Keynes's conventional model of free economy lost its good cause which originated new theories; included in these theories is 'neoclassic' which varied short-term regulation and yet recommended Keynes's desired collection. Included amongst is 'neo classics' which preferred that their proposed factors should move in the path of long term balance of economic system development. Like the Keynes', they had also constructed their proportional models of macroeconomic where the process of token money was in priority. Neoclassic advocates claimed that intermediaries cause demand aggregate in free economy and have a negative impact on the value of token and currency money; the issue is generally manifested in inflation blast, trade and balance and also irregular changes of currency price.

During 1970 and 1980s of the twentieth century, drastic changes in the international finance and credit system generated new models of open economy (i.e. after the disintegration of Bretton Woods value and currency exchange price stability dysfunction in the western countries and other procedures). In the western literature, these models were composed of common and subset titles of 'investment actives theories'. The models were basically viewed institutional factors such as anticipations, institutions, economy, inflation predictions, etc. From advocates' views of free economy model, the free economy system factors create new restrictions in government stabilization policies. They claim that in both Keynes and Neoclassic models of free economy there are some deficiencies: in Keynes model, macroeconomic processes are simplified and price changes are observed. Yet, in neoclassic model although long-term balance is explicated, the short-term balance is unobserved. Furthermore, during the recent course both these models are to be used at the international arena of finance and credit and

activated processes to correlate primary market of the western world.

The basic theories of these policies were heeded in developed countries such as U.S.A, U.K. and so forth between 70s and 80s of the twentieth century and eventually it was concluded that when an open economy system is discussed, it is apprehension of an economy system which is profoundly prescribed for global economy system.

By generalization of the above stated theoretical concepts in terms of free economic system, we can conclude that as a typical form of national economy, the open economy system should state these features:

- Privatising production in correlation with the predominant in the international division of labor;

- Domestic and world market prices in proportion with main products;

- Active participation of the country and guarantees for international alliance organizations, etc.;

Studies indicate that currently no country is completely open to market, i.e. even countries where developed market economy (U.S.A., Japan and Western Europe) is regulated via foreign relations through brokers and various principles, including disciplinary brokers. Nonetheless, systematiza-tion in these countries is accomplished on the basis of global economy system revealed processes.

Here, it is clearly evident that in an open system condition, foreign relations including trade economic relations can be a very strong effective national economy factor that as a whole can be converted to production market. Hence, market consumption formation features studies for economy makers of countries like Azerbaijan Republic is essential. For this reason, at