научная статья по теме The genesis of the domestic historiography of political education of the Soviet Army staff of the interwar period (1920s - June 1941): the history of the researching the problems in domestic historical science Биология 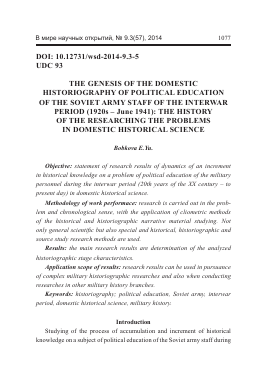 Текст научной статьи на тему «The genesis of the domestic historiography of political education of the Soviet Army staff of the interwar period (1920s - June 1941): the history of the researching the problems in domestic historical science»

THE GENESIS OF THE DOMESTIC

HISTORIOGRAPHY OF POLITICAL EDUCATION OF THE SOVIET ARMY STAFF OF THE INTERWAR PERIOD (1920s - June 1941): THE HISTORY OF THE RESEARCHING THE PROBLEMS IN DOMESTIC HISTORICAL SCIENCE

Objective: statement of research results of dynamics of an increment in historical knowledge on a problem of political education of the military personnel during the interwar period (20th years of the XX century - to present day) in domestic historical science.

Results: the main research results are determination of the analyzed historiographic stage characteristics.

the interwar period, carried out in the format of a problem and thematic historiography, is actual for a modern stage of domestic historical science development for a number of grounds. The effective system of political education of the military personnel is one of the fundamental elements of ensuring fighting capacity of the country. In the 90th years of the XX century of Armed Forces of the Russian Federation received "a destructive information attack" [1, p. 81] therefore now "we have to define perspective ideology of armies [...] development, clearly designate their objectives and tasks...". [1, p. 85]. The understanding of such situation is promoted by the appeal to historical experience, including the historiographic generalizations. The ideological military concept is inseparably linked with educational work in armies [2] therefore the understanding of historical experience at the level of historiographic generalizations promotes effective activity in the field of development and deployment of new conceptual approaches. It should be noted that at the beginning of the XXI century the dialectically inconsistent situation was formed in the domestic historical science caused on the one hand by the "crisis of domestic historical science", [3] on the other hand by the development of methodological pluralism in the researches not protecting from "sometimes taking place distortions" [4] of the historical reality.

The research objective is the multifold analysis of the processes of scientific knowledge formation on a problem of political education of the Soviet army staff in the interwar period, a quantitative and qualitative state of a domestic historiography, its main tendencies and further prospects.

The source base of the research is collections of documents and materials, sources of personal nature, periodicals; research and scientific reference books, documents of the Soviet state governing bodies. The current lack of actual complex historiography on the issue of political education of the Soviet army staff in the interwar period requires historiographical development, capable of identifying the key trends and key positions of the problem, determination of its prospects for further study.

An array of research materials can be represented by the following scheme:

Additional sources (not the historical character)

Chronological framework of analyzed historical sources are limited for the period of development of the Red Army in the interwar period (1920s -June 1941), while the chronology of the study covers the range from the 1920s. till the present time that can more fully trace the development of historiography of the problem, and enables comparative analysis of Soviet and post-Soviet historiographical sources.

The research results and their discussion

Common research can be classified into two groups. The first group -the works on the history of Soviet historical science in general that can form an idea about development trends examining issues of public authorities and the military to the political education of the personnel of the Red Army in 1920s - June 1941 . Provisions contained therein characterize the effect of socio- political atmosphere of creativity researchers of the problem . Characteristics of this set of papers is partially represented in the works of

The second group contains works, which addresses the problems of studying predominantly military aspects of Soviet historiography, which highlights topics related to the peaceful period of development of the Soviet state. Some information can be gleaned of them, also pertaining to the history of historiography considered in these essays. Characteristics of this set of papers is partially represented in the works of Stepanova E.E. [11] , in the author's publications on topics of inter-war [8, 9] ], studies of Terekhov VF [12], Antipina L.N. [13], Zaretsky S.F. [14], Bochkova E.A. [15 ] and others.

The special studies "of the Soviet period" primarily include the research on the history of the problem of party political work in the Armed Forces of the USSR, in the content of addressed and analyzed topics. This group work is plentiful, because it touches such a multifaceted phenomenon of Soviet history, as party-political work in the Armed Forces of the USSR. The analysis shows that in 1920th - the first half of the 1950th. history of the study of party political work took place not very active. They present visibility and a large proportion of the narrative. However, in the late 50th - early 60th of the XX century there has been a qualitative shift: the history of studying the problem of party political work in the Armed Forces of the USSR became replenished with historiographical research. By the time the empirical material was accumulated, the range of sources was expanded, qualifications of scientific personnel increased and they were capable to move from historical research to historiographical. There were the first publications at a scientific level considering questions of historiography party political work in conjunction with other problems and, including some aspects of the study themes, mostly - at the level of publications in scientific periodicals. Since the second half of the 1960s there were resources that have allowed scientists to go on to create historiographical collections and monographs, in which a certain place was given to the history of party political work and research problem. Their detailed characteristics are presented in the author's works on the interwar

In the same period a number of theses was protected, reflecting the history of the studied topic, including - and historiographical aspects considering problem in a composite unit of historiographical interpretation of the theme of military discipline and order, military , patriotic and international education at various military stages in the history of the Soviet state . Separately to emphasize that special works , as well as general , are ideologized and politicized, due, in particular, to their implementation within the theoretical and methodological coordinates of dogmatic Marxism-Leninism in the Bolshevik measurement.

The post-Soviet historiographical period also has both general and special studies involving positions of new approaches, which took place in the early 90th. of the XX century, the process of formation and approval.

Common researches include works on the history of both Soviet and post-Soviet historical science in general. In them, just as in Soviet historiography, provisions are contained, characterizing the effect of socio-political atmosphere of creativity researchers of the problem . But the works were carried out in conditions of uncensored and without ideological dictatorship of the C.P.S.U., which, of course , had a positive effect on their scientific quality. However, the political situation took place too. Their detaile