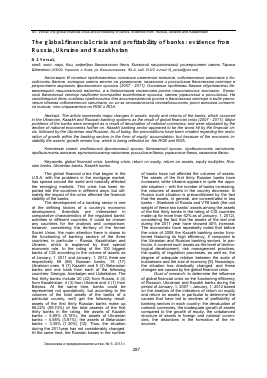 ﻿The global financial crisis and profitability of banks: evidence from Russia, Ukraine and Kazakhstan

Abstract. The article represents major changes in assets, equity and returns of the banks, which occurred in the Ukrainian, Kazakh and Russian banking systems as the result of global financial crisis (2007 - 2011). Major problems of the banks were emerged as a result of devaluation of national currencies; and were stipulated by the decline of national economies further on. Kazakh banking sector appeared to be the worst hit by the financial crisis, followed by the Ukrainian and Russian. As of today, the preconditions have been created regarding the restoration of growth within the banking sectors in the form of equity' accumulation, but because of the economic instability the assets' growth remain low, which is being reflected on the ROE and ROA.

The global financial crisis that began in the U.S.A. with the problems in the mortgage market, has spread around the world and naturally affected the emerging markets. This crisis has been imported into the countries in different ways, but ultimately the impact of the crisis affected the financial stability of the banks.

The development of a banking sector is one of the defining factors of a country's economic development. Scientists are intereseted in comparative characteristics of the regulated banks' activities in different countries. It could be chosen any countries for the analysis and comparison; however, considering the territory of the former Soviet Union, the main attention there is drawn to the functioning of banking sectors of the three countries, in particular - Russia, Kazakhstan and Ukraine, which is explained by their special economic role. In the rating of the 100 biggest banks of CIS according to the volume of assets as of January, 1, 2011 and January, 1, 2012, there are respectively 69 (66) Russian banks, 15 (17) Ukrainian ones, 8 (7) Kazakh and 5 (3) Belarusian banks and one bank from each of the following countries: Georgia, Azerbaijan and Uzbekistan. The first thirty banks include 20 (22) from Russia, 4 (4) from Kazakhstan, 4 (3) from Ukraine and 2 (1) from Belarus. At the same time, banks could be represented not quantatively, but according to the volumes of the total assets of the banks of a particular country, we'll get the following result: assets of the first thirty Russian banks make up 86,22% (89,74%) of the total assests of the first thirty banks in the rating, the assets of Kazakh banks - 5,85% (5,15%), the assets of Ukrainian banks - 4,58% (3,81%), the assets of Belarusian banks - 3,35% (1,30%) [12]. Thus, the situation during the 2011year has not considerably changed. At the same time, the Russian losses in the number

of banks have not affected the volumes of assets. The assets of the first thirty Russian banks have increased, while Ukraine appears in quite the opposite situation - with the number of banks increasing, the volumes of assets in the country decrease. In Russia such situation is preconditioned by the fact that the assets, in general, are concentrated in two banks - Sberbank of Russia and VTB bank (the unit weight of these two banks' assets among the assets of the first thirty banks in the rating of CIS countries made up for more than 52% as of January, 1, 2012), considering the fact that the assets of the last one during the 2011 year have showed 40% increase. The economists have repeatedly noted that before the crisis of 2008 the Kazakh banking sector functioned featuring its high efficiency, if compared to the Ukrainian and Russian banking sectors. In particular, it covered such issues as the level of technological development, risk management practices, the quality of regulation processes, as well as, the degree of adequate relation between the scale of businesses and the size of economy [9]. Nowadays, the situation has drastically changed, and these changes are caused by the global financial crisis.

Goal of research: to determine the influence of global financial crisis on the functioning efficiency of Russian, Ukrainian and Kazakh banks during the period of January, 1, 2007 - January, 1, 2012 based on the analysis of the indicators of return on equity and return on assets, in particular to determine the causes that have led to declines of profitability of banking sectors in each country: the devaluation of national currencies, the inadequate growth of assets compared to the growth of equity, the unbalanced structure of assets in foreign and national currencies, the distortions in the formation of the resources.

Object of research', the Ukrainian, Kazakh and Russian banks before, during and after the global financial crisis.

Research methods: the research includes the following methods, analysis and synthesis of literature, induction and deduction, analysis of data, systematization, comparison, summation of data and methods of graphic representation. We also have to highlight the disclosure of the essence of separate indicators, which will be used in the research. The indicators include those of equity, return, return on equity, return on assets and standard deviation. The research applied solely official data provided on a regular basis by the regulatory authorities of Russia, Ukraine and Kazakhstan. While estimating a bank's net equity, we encounter the problem of its calculation, as it may range between such kinds as shareholder's equity, capital stock and regulatory equity (calculation according to a central bank's method). It was, namely, the reason for comparative evaluation of the shareholder's equities and the capital stocks of the banks, which are formed at the expense of the bank's sharers' funds.

The following is the shareholders' equity equation.

In order to compare the capacities of separate indicators of banking activity it is necessary to present them in the same currency. The US dollar was chosen for this purpose. Considering the need of converting national currencies into the foreign one, the data regarding asset and equity volumes was given in annual average figures.

Return on assets tells us how much profit a bank generated for each one dollar in assets. So ROA is expressed as a percentage and calculated as.

The equity multiplier is a way of examining how a company uses debt to finance its assets. Also known as the financial leverage ratio or leverage ratio and is calculated as.

time of crisis the calculation of correlation (ratio) between total assets and capital stock is necessary.

The standard deviation in the research is applied with the aim of defining a country with the highest total risk of the banks' activity. The higher this indicator is the more unstable was the situation in the banking sphere, i.e. large losses substituted for high banks' returns.

The research applies the definition of a banking crisis according to A. Demirguk-Kunt and E. De-traghiache, which is based not only on qualitative but also quantitative characteristics. Therefore, under the definition of a banking crisis it is proposed to understand the situation in which at least one of the following conditions is performed [5]. share of bad assets to total assets in the banking sector exceeds 10%; the costs of implementing measures to improve the situation in the banking sector increased more than 2% of GDP; the resul