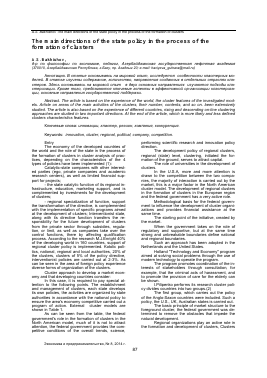 ﻿AS. Bakhishov The main directions of the state policy in the process of the formation of clusters

Abstract. The article is based on the experience of the world, the cluster features of the investigated models. Article on areas of the main activities of the clusters, their number, contents, and so on. been extensively studied. The article is also based on the experience of different countries, rising and descending on-line clustering approaches are studied in two important directions. At the end of the article, which is more likely and less defined clusters characteristics features.

The economy of the developed countries of the world and the role of the state in the process of the formation of clusters in cluster analysis of practices, depending on the characteristics of the 4 types of policies have been implemented (1):

- the state catalytic function of its regional infrastructure, education, marketing support, and is complemented by investments for the development of clusters;

- regional specialization of function, support the transformation of the directive, is complemented with the implementation of specific programs aimed at the development of clusters; Interventionist state, along with its directive function transfers the responsibility for the future development of clusters from the private sector through subsidies, regulation, or limit, as well as companies take over the control functions, there by affecting qualification process. According to the research M.J.Enright 40% of the developing world in 160 countries, support of regional cluster policy is implemented. Kotolic politics, national, regional and local authorities, 20% of the clusters, clusters of 5% of the policy directive, interventionist policies are carried out at 2-3%. As can be seen in the area of foreign policy experience diverse forms of organization of the clusters.

Cluster approach to develop a market economy and that developing countries consider:

In this case, it is required to pay special attention to the following points. The establishment and management of clusters, each state develops its own policies, the activities are organized by state authorities in accordance with the national policy to ensure the area's economy competitive carried out a program of action. External cluster models are shown in Table 1.

The development policy of regional clusters, regional (state) level, clustering, initiated the formation of the ground, serves to attract capital.

The role of universities in the development of clusters.

In the U.S.A, more and more attention is drawn to the competition between the two companies, the majority of interaction is carried out by the market, this is a major factor in the North American cluster model. The development of regional clusters in the formation of clusters in the European region and the federal government has a very active role.

Methodological basis for the federal government to influence the development of cluster organizations and provides financial assistance at the same time.

The starting point of the initiative, created by the market.

When the government takes on the role of regulatory and supportive, but at the same time strong and unbreakable boundaries define national and regional boundaries.

Such an approach has been adopted in the Netherlands and the United States.

Holland "Technology and Economy" program aimed at solving social problems through the use of modern technology to operate the program.

The program promotes coordination of the interests of stakeholders through consultation, for example, that the criminal acts of harassment, and to promote the provision of care for the elderly can be shown.

The first group, which carries out the policy of the Anglo-Saxon countries were included. Such a policy, the U.S., UK, Australian states is carried out.

The basic principle of market structure to the foreground cluster, the federal government was determined to remove the obstacles that impede the natural development.

Regional organizations play an active role in the formation and development of clusters, Clusters

Clusters play a major role in the development of the countries mentioned in the federal government: superb selection of clusters, clusters development strategy; financing of development projects and developed appropriately.

USA Supporting innovation and the impact of scientific and technical cooperation, Scientific, Technical Design Projects applying preferential tax and credit policy enforcement organizations. groundwork for the creation of conditions for die initial start-up capital in the form of Is a summing up of the region, natural, scientific, human resources, integrated use of maximum capacity There is a. cluster of 380 (information technology, winegrowers., cars, air kosmos and other clusters)

Italy Preferential export regime; concentration of resources and capital to invest in the regulation of the labor market to attract potential to stimulate growth, the role of the local municipalities Determined bv summing die area of small and medium-sized companies, and the combination of different associations. Cooperation with the European institutions 200 industrial area (furniture., food, light industry, etc.).

Japon Regions specializing in a single area, advanced scientific and technical studies, the results of die export The role of large companies (leading companies} chains at different stage; of technological operations, integration of multiple suppliers Electrical, automotive and others.

Two important aspects of learning from the experience of different countries can be mentioned in policy formation in clusters: ascending and descending linear approaches.

Approach to ensuring the effective functioning of the market and the market is rising deficit to cancel the service.

Down the line, determine the development priorities of the government, regional and national events, which stimulates the formation of a vision for the future (as a process of dialogue), selects the subjects to engage in dialogue.

Approaches to support the formation of clusters is performed in the following form:

Cluster support for the formation of

Cluster support for the formation of

All of these are supplied by foreign suppliers of kinds of strategic resources, in turn, is connected with narrow national markets.

The choice of subject.

One of the features of the European region of the cluster model, the interaction of government and business. If there is a certain distance between them in the U.S., Europe, the state has been working with entrepreneurs, large industrial companies,

but does not intervene directly in the structures of the European model in Asia, "State-of-business' model as one of the main differences can be noted at this point. Northern European countries are