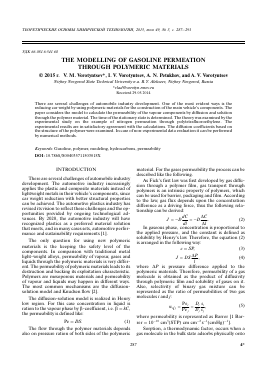 There are several challenges of automobile industry development. One of the most evident ways is the reducing car weight by using polymeric materials for the construction of the main vehicle's components. The paper considers the model to calculate the permeability of the vapour components by diffusion and solution through the polymer material. The time of the stationary state is determined. The theory was examined by the experimental study on the example of nitrogen permeation through polytetrafluoroethylene. The experimental results are in satisfactory agreement with the calculations. The diffusion coefficients based on the structure of the polymer were examined. In case of non-experimental data evaluation it can be performed by numerical methods.

There are several challenges of automobile industry development. The automotive industry increasingly applies the plastic and composite materials instead of lightweight metals in their vehicle's components, since car weight reduction with better structural properties can be achieved. The automotive plastics industry has revised its vision to reflect these challenges and the opportunities provided by ongoing technological advances. By 2020, the automotive industry will have recognized plastics as a preferred material solution that meets, and in many cases sets, automotive performance and sustainability requirements [1].

The diffusion-solution model is realized in Henry low region. For this case concentration in liquid is ration to the vapour phase by P-coefficient, i.e. P = kC, the permeability is defined like:

material. For the gases permeability the process can be described like the following.

As Fick's first law was first developed by gas diffusion through a polymer film, gas transport through polymers is an intrinsic property of polymers, which can be used for barrier, packaging and film. According to the law, gas flux depends upon the concentration difference as a driving force, thus the following relationship can be derived:

In gaseous phase, concentration is proportional to the applied pressure, and the constant is defined as solubility by Henry's law. Therefore, the equation (2) is arranged in the following way:

where AP is pressure difference applied to the polymeric materials. Therefore, permeability of a gas molecule is obtained as the product of diffusivity through polymeric film and solubility of gases on it. Also, selectivity of binary gas mixture can be represented as the ratio of permeabilities of two gas molecules i and j:

Sorption, a thermodynamic factor, occurs when a gas molecule in the bulk state adsorbs physically onto

a polymeric film surface with respect to the concentration difference, while diffusion, a kinetic factor, is related to how fast a gas molecule can pass through the polymeric film. Sorption and diffusion are activated energy processes, which are affected substantially by temperature; thus, the relationships for D, S and Pe are expressed as a function of temperature:

where Ep = Ed + AHs is the activation energy of permeation. Since diffusion of gas molecules through polymers and sorption of gases on polymers are affected by the type of polymers, gas permeabilities are determined by the gas-polymer affinities. Therefore, two factors, thermodynamics and kinetics, are important for high permeation and separation performances simultaneously.

The transport mechanism of a component through this polymer used in pervaporation is the same as in gas separation. The driving force for the transport is the chemical potential gradient of the permeating components in the membrane. The chemical potential gradient in the membrane can be related to the partial vapour pressures in the liquid and vapour phase. To establish a partial pressure difference of a component in the liquid and the vapour phase, generally a vacuum is applied at the permeate side of the polymeric film. But differences in the partial pressure of a component can also be established by using a sweeping gas on the permeate side or by a temperature difference between the liquid feed and the vapour.

The mass transport in a pervaporation can be described by the same mathematical relations as the gas transport [equations (1)—(8)] with the exception that the chemical potential in the membrane on the feed side of the membrane is not expressed by the molar fraction, the hydrostatic pressure, and the fugacity coefficient but by the molar fraction and the activity coefficient in the liquid phase, and the saturation pressure of the component.

Thus, the mass transport in pervaporation is given by:

Equation (9) describes the permeation flux of a component i as a function of the feed and permeate mixture composition and its diffusivity and solubility in the membrane which can easily be determined by independent measurements. The practical application of equation (9) however, is rather limited since the diffusion coefficient as well as the distribution coefficient are not constant but depend strongly on the concentration of the permeating component in the membrane. This dependency must be determined experimentally and it can be different for membrane materials and vapours.

The feature of gasoline permeability through the polymeric materials is a multicomponent of gasoline, because the permeability of the single components of this mixture might be different and sometimes this difference can be rather significant.

For a pervaporation experiment using a vacuum the separation factor is to a first approximation:

It should be noticed that the separation factor consists of two terms, the first term, i.e. a.j k represents the selectivity of the polymeric film and the second term

(YljPu )/(Y kpk) the thermodynamic liquid/vapour equilibrium which represents the separation would be achieved by distillation. In pervaporation the polymeric film permeability selectivity for the gasoline components can increase or decrease the distillation selectivity, eventually pushing the overall separation factor into the opposite direction.

The polymers that compromise most high-performance gas separation membranes are amorphous, glassy material [3]. These materials are superior permeability based on their ability to form rigid structures [4—8].

THE MODELLING OF GASOLINE PERMEATION

The gas diffusion coefficients can be estimated either from molecular dynamic simulations by using the Einstein [equation (12)] or by means of the Green-Kubo [equation (13)] formulations:

The mechanism of diffusion in rubbery polymers is different from the glassy ones. The diffusion coefficients for small gas molecules in rubbery polymer membranes do not depend on concentration whilst in glassy polymers which are not in a thermodynamic equilibrium state in do depend and reach a constant value at relatively high concentration. For these polymers the final metastable chain configuration depends on the processing history of the membrane. This detail makes even more difficult the modelling of glassy polymer membranes due to lack of experimental structural data for validating computational approaches. The prediction of self-diffusion coefficients for non-polar small gas molecules in amorphous rubber polymer matrices is normally done through molecular dynamic calculations [9-11].