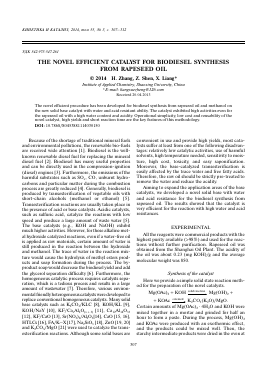 The novel efficient procedure has been developed for biodiesel synthesis from rapeseed oil and methanol on the new solid base catalyst with water and acid resistant ability. The catalyst exhibited high activities even for the rapeseed oil with a high water content and acidity. Operational simplicity, low cost and reusability of the novel catalyst, high yields and short reaction time are the key features of this methodology.

Because of the shortage of traditional mineral fuels and environmental pollutions, the renewable bio-fuels are received wide attention [1]. Biodiesel is the well-known renewable diesel fuel for replacing the mineral diesel fuel [2]. Biodiesel has many useful properties and can be directly used in the compression-ignition (diesel) engines [3]. Furthermore, the emissions of the harmful substrates such as SOx, CO, unburnt hydrocarbons and particular matter during the combustion process are greatly reduced [4]. Generally, biodiesel is produced by transesterification of vegetable oils with short-chain alcohols (methanol or ethanol) [5]. Transesterification reactions are usually taken place in the presence of acid or base catalysts. Acidic catalysts, such as sulfuric acid, catalyze the reactions with low speed and produce a large amount of waste water [5]. The base catalysts (e.g., KOH and NaOH) exhibit much higher activities. However, for those alkaline metal hydroxide catalyzed reactions, even if a water-free oil is applied as raw materials, certain amount of water is still produced in the reaction between the hydroxide and methanol. The trace of water in the reaction mixture would cause the hydrolysis of methyl esters products and soap formation during the process. The byproduct soap would decrease the biodiesel yield and add the glycerol separation difficulty [6]. Furthermore, the homogeneous catalytic process requires catalysts separation, which is a tedious process and results in a large amount of wastewater [7]. Therefore, various environmental friendly heterogeneous catalysts were developed to replace conventional homogeneous catalysts. Many solid base catalysts such as K2CO3/KLC [8], KOH/KL [9], KOH/NaY [10], KF/Ca^O^ + 3) [11], Ca^Al^ [12], KF/CaO [13], Sr(NO3)2/Al2O3[14], CaO [15, 16], HTLCs [16], FA/K-X [17], Na2SiO3 [18], ZnO [19, 20] and K2CO3/MgO [21] were used to catalyze the trans-esterification reactions. Although some solid bases are

convenient in use and provide high yields, most catalysts suffer at least from one of the following disadvantages: relatively low catalytic activities, use of harmful solvents, high temperature needed, sensitivity to moisture, high cost, toxicity, and easy saponification. Moreover, the base-catalyzed transesterification is easily affected by the trace water and free fatty acids. Therefore, the raw oil should be strictly pre-treated to remove the water and reduce the acidity.

All the reagents were commercial products with the highest purity available (>98%) and used for the reactions without further purification. Rapeseed oil was obtained from the Shanghai Oil Plant. The acidity of the oil was about 0.23 (mg KOH)/g and the average molecular weight was 850.

Synthesis of the catalyst

Here we provide a simple solid state reaction method for the preparation of the novel catalysts.

+ KOAc calcined. K2CO3(K2O)/MgO. Certain amounts of Mg(OAc)2 • 4H2O and KOH were mixed together in a mortar and grinded for half an hour to form a paste. During the process, Mg(OH)2 and KOAc were produced with an exothermic effect, and the products could be mixed well. Then, the starchy intermediate products were dried in the oven at

Fig. 1. The TG analysis of the intermediate products.

The procedure of biodiesel synthesis

Typically rapeseed oil (5 g), methanol and the solid base (or other comparative catalysts) were mixed together and stirred at 70°C for the specified period. The reaction was monitored by GC analysis. After completion, catalyst was filtered and the filtrate was distilled to remove excess of methanol. Then the filtrate was centrifuged with the formation of two phases. The top layer was biodiesel, and the lower was glycerol and small amounts of glycerides. The biodiesel was collected for chromatographic analysis.The quantitative analysis of the product was carried out on a temperature programmed Shimadzu chromatograph (GC-14C) with OV-17 column using nitrogen as carrier gas and FID detector. The column temperature was raised from 40 to 260°C at a heating rate of 10°C/min.

The biodiesel yield was calculated from the content of methyl esters analyzed by GC using methyl laurate as internal standart:

where Mw is the average molecular weight. The pure biodiesel was obtained under the optimal reaction conditions and the isolated yield also fits well with the GC analysis with a difference within 1%.

The effect of the calcination temperature

As was shown in the experimental part, the active basic sites were produced during calcination. So the temperature was very important for the solid base. The TG analysis of theintermediate productswas taken (Fig. 1). There observed two obvious weight losses during the heating process. The first was occurred at 50—100°C and was due to the water loss. The water loss was about 30% in agreement with the molar ratio of (Mg(OAc)2 • 4H2O)/KOH = 2. The TG curve also showed the decomposition of Mg(OH)2, Mg(OAc)2 and KOAc above 370°C. More than a 50% mass loss was found at 370-500°C. This value is markedly higher than the calculated value (40%) for the formation of intermediate products. The results showed that some K2CO3 formed during the calcining process would further decomposed and formed K2O species and others. As seen from Fig. 1, slight weight loss continued even above 600° C indicating that the stronger base sites formed.

Catalytic activities of the solid base calcined at different temperatures were as follows:

The effect of the molar ratio ofMg(OAc) 2 and KOH

The active sites were produced from KOAc. The effect of molar ratio of Mg(OAc)2/KOH was also investigated for the transesterification of rapeseed oil:

The results showed that KOH exerted a key effect on the reaction. Very low yield of 20.3% was obtained when Mg(OAc)2 alone was used as a raw material. In the course of calcination Mg(OAc)2 was transformed into MgO as a single support. These results indicated that the active sites for the reaction were not originated from MgO. The reaction could not be efficiently activated with little KOH amount, for there were not enough active sites for the reaction. Here the active base sites K2CO3 and K2O were produced by the decomposition of intermediate product KOAc, which was formed from KOH and Mg(OAc)2. The catalytic activity increased with the KOH amount and the excellent yield of 99% was obtained when the molar ratio of KOH and Mg(OAc)2 reached 15/20. Further increase of the KOH amount seemed to be meaningless for the reaction since the yield remained the same. So the optimal molar ratio of KOH and Mg(OAc)2 was chosen as 15/20.

stronger base sites such as K2O were produced even at low temperature. These base sites had very impo