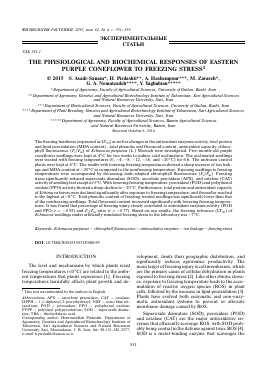 velopment, limits their geographic distribution, and significantly reduces agronomic productivity. The main target of freezing injury is cell membranes, which are the primary cause of cellular dehydration in plants exposed to freezing stress [2]. Like other abiotic stresses, exposure to freezing temperature leads to the accumulation of reactive oxygen species (ROS) in plant cells, followed by the increase in lipid peroxidation [3]. Plants have evolved both enzymatic and non-enzymatic antioxidant systems to prevent or alleviate membrane damage caused by ROS.

Superoxide dismutase (SOD), peroxidase (POD) and catalase (CAT) are the major antioxidative enzymes that efficiently scavenge ROS, with SOD probably being central in the defense against toxic ROS [4]. SOD is a metal-binding enzyme that scavenges the

toxic superoxide radicals and catalyzes the conversion of two superoxide anions into oxygen and H2O2. Then, POD and CAT convert H2O2 into H2O and O2, whereas APX decomposes H2O2 by oxidation of co-substrates, such as phenolic compounds and/or antioxidants [5]. In addition, polyphenol oxidase (PPO) catalyzes the oxidation of o-diphenols to o-diquinones, as well as the hydroxylation of monophenols [6]. PPO is also an important enzyme in the response of plants against freezing stress, and it can help to avoid serious oxidative damage induced by freezing [6]. In order to accommodate the oxidative stresses, it is crucial that plants maintain the activities of these antioxidant enzymes.

Furthermore, under stress conditions, the possibility of overexcitation of photosystem II (PSII) increases and this reduces the photosynthetic rate and leads to an increase in the dissipation of absorbed energy through non-radiative processes [7]. Therefore, non-invasive measurement of photosynthesis by chlorophyll a fluorometry may potentially provide a means to determine plant viability and performance in response to stress. Researchers have shown chlorophyll fluorescence to be well correlated with foliar damage following freeze stressing [8, 9].

The genus Echinacea, commonly known as purple coneflower, is a member of the Asteraceae family comprising of nine species and four varieties, all native to North America. Many types of phytomedicine are commercially produced from the aerial portions of Echinacea for boosting the nonspecific immune system and treating common cold. Echinacea purpurea L. is one of the top selling medicinal plants that contain many active components such as alkamides, caffeic acid esters, polysaccharides, and polyacetylenes. It was found to possess antioxidant and high free radical scavenging properties making it a very promising medicinal botanical [10].

This plant has been reported to tolerate a wide range of environmental stresses such as salinity and drought [11]. However, up to now, there is hardly any report regarding freezing or chilling tolerance of E. purpurea. So, knowledge of the physiological and biochemical responses of E. purpurea seedlings to freezing temperatures will be crucial for planting at regions with colder climate.

Freezing treatments. The bags were covered with a layer of glass wool to protect the roots from freezing damage. The seedlings were divided into two groups. One group was kept in a growth chamber at 4°C in the dark for 24 h as a unfrozen control and the second group was placed into a programmable test chamber for whole plant freezing treatment. The chamber temperature was decreased stepwise from 2°C/h until -4°C and at 5°C/h until -20°C. Seedlings were exposed to freezing temperatures (0, —4, —8, —12, —16, and — 20° C) for 6 h. Relative humidity inside the chamber was kept at 45—50%, and darkness conditions were simulated. Then, the bags were removed from the glass wool, and recovery was performed by rising the temperature at the same rate until reaching again the temperature of 4°C for slow thawing in the dark for 24 h.

For freezing stress evaluation, the above ground parts were frozen in liquid nitrogen and kept at —80°C until further biochemical analysis. The rest of the plants were used to determine freezing injury and chlorophyll a fluorescence.

Determination of freezing injury. Ion leakage of leaves was measured as described by Dexter et al. [12] with some modifications. Samples were cut into equal pieces (10 mm in diameter), placed in the test-tube containing 10 mL of distilled water, and kept at 45 °C for 30 min in a water bath. The initial conductivity of the solution was measured using a Mi 306 EC/TDS conductivity meter ("Milwaukee Instruments", Hungary). The tubes were then kept in a boiling water bath for 10 min, and their conductivity was measured once again after cooling to room temperature. Percentage of ion leakage (IL) for each treatment was converted to percentage of injury as:

where IL(t) and IL(c) are the IL from the respective freeze-treatment temperature and the unfrozen control, respectively.

LT50, a measure of freezing tolerance, was derived for E. purpurea by determining the freeze test temperature at which 50% injury (midpoint of maximum and minimum percentage of injury) occurred as explained by Lim et al. [13].

Leaves were weighed and homog