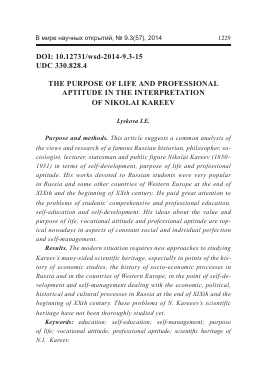 Purpose and methods. This article suggests a common analysis of the views and research of a famous Russian historian, philosopher, sociologist, lecturer, statesman and public figure Nikolai Kareev (1850— 1931) in terms of self-development, purpose of life and professional aptitude. His works devoted to Russian students were very popular in Russia and some other countries of Western Europe at the end of XIXth and the beginning of XXth century. He paid great attention to the problems of students' comprehensive and professional education, self-education and self-development. His ideas about the value and purpose of life, vocational attitude and professional aptitude are topical nowadays in aspects of constant social and individual perfection and self-management.

Results. The modern situation requires new approaches to studying Kareev's many-sided scientific heritage, especially in points of the history of economic studies, the history of socio-economic processes in Russia and in the countries of Western Europe, in the point of self-development and self-management dealing with the economic, political, historical and cultural processes in Russia at the end of XIXth and the beginning of XXth century. These problems of N. Kareeev's scientific heritage have not been thoroughly studied yet.

the sphere of the meaning of life and values. Social infantilism of young people, inanity of life, and neglect of the importance of education, self-determination and constant self-development constitute a serious social threat for our community.

The end of the XlXth and the beginning of the XXth century have a special appeal for the current researchers because of the process of modernization in different spheres of life. Various considerable changes took place in industry, agriculture and trade. But as for the system of education, it did not satisfy the demands at that time. It is important to mention that state educational policy, being very conservative, served as one of the negative factors, defining Russia's social, economic and cultural backwardness.

State institutions of autocratic Russia had less and less instruments, which were able to restrain people's endeavour to education. The need for education became of current importance for the society. However, very often it was not enough just to have a will to study. Factually, according to the first all-Russian population census of 1897, out of 126 billion people only 26, 5 billion were literates, while 99, 5 billion people could neither read, nor write. It meant that there were 788 illiterate people per thousand, whereas in Germany only 20 people per thousand were illiterate, in England - 80, in France - 150. Educational opportunities were restricted by independent circumstances. Thus, in North America in 1906-1908 there were 210 schoolchildren per thousand people, in England - more than 170, in Germany - about 160, in France - more than 140, in Japan - over 110. As for Russia, the number of schoolchildren was about 40 per thousand. In 1906 there were 141, 5 billion people, living in Russia. Out of them 12, 736 billion children were of school age, but only 5, 389 went to school. The rest of them, more than 7, 3 billion children, could not study because of the shortage of schools [1, p. XIV; 2. pp. 126-150].

The problem of qualified specialists training should have been solved because it was needed in all the spheres of economy. That is why the leading scientific and pedagogical communities raised the problems of professional calling, vocational orientation, deliberate attitude to the choice of

educational institutions, the problems of motivation for work and studies. What's more, the ideas, that education and many-sided development of personality are the essential needs of a person, became widespread.

A famous Russian scientist and public figure Nikolai Ivanovich Ka-reev paid special attention to the problems of development of education. He always was a supporter of the idea of democratization in the system of education. As he wrote, "the right to education is a natural human's right, as the right to life, freedom, happiness, and the ideal of general education is that it should be general for every member of a nation" [3, p. 126].

Purpose and methods of research

Our aim is to analyze and emphasize the topicality of N.I. Kareev's scientific heritage, devoted to the some problems of the determination of purpose of life and professional aptitude in the context of socio-economic and socio-cultural development of Russian society at the end of the XlXth and the beginning of the XXth century.

The results of the research and their interpretation

For a long time N.I. Kareev worked as a teacher, was a lecturer at St. Petersburg State University and Warsaw University, at the High women's courses (Bestuzhev Courses), Imperial Alexander Lyceum, later, at the beginning of the XX century at the Polytechnic and Psychoneurological institutes. When in Western Europe, he was often asked to speak to the public on various acute questions. N.I. Kareev was widely known as a scientist, philosopher, and sociologist. Moreover, he got recognition as an active social and political figure. His creative potential was enormous. He was continuously and productively occupied with science, was the head of the Historical society at St. Petersburg State University, the editor of the magazine called "The Historical Survey", the editor of the historical department of "The Brockhaus and Efron Encyclopedic Dictionary" and worked at the Literature Foundation. It's important to mention that he was the organizer of the Department of assistance to self-education at one of the museums in St. Petersburg and was elected to the State Duma. All

that was just a part of his social activity, he had so many interests and ideas and "even wondered how he could find time for everything" [4, p. 191].

During all his life N.I. Kareev was involved in the research of the problems of Russian youth's education. He gave prominence to the tasks of self-education and personal development. The series of works addressed to Russian youth was immensely successful and included such works as "The letters to students about self-education", "The talk about the process of development of world-outlook", "The choice of the faculty and studying at a university", "The ideals of comprehensive education" and others. Many of his ideas on the problems of education, self-education, self-development, the importance of social and professional activity are still relevant and interest a lot of people nowadays [5].

N.I. Kareev in his works suggested theoretical substantiation of the tasks of personal development and emphasized the significance of practical issues in social activity. His work "The choice of the faculty and studying at a university" became the first experience of pedagogical and psychological support to young people in questions of the choice of educational institutions and adaptation to the process of studying [6; 7; 8; 9].

From the practical point of view N.I. Kareev's work "The thoughts about the essence of public activity" is also very remarkable. N.I. Kareev raised many questions about the specificity of individual and social behavior of a person. One of the most difficult questions for profound understanding was about the purpose of life and life calling.

This question was viewed by Kareev as a part of the system of public activity of a person, the system which is inseparably linked with economic, political, juridical, and cultural processes, which determine the substance of social life. N.I. Kareev accentuated that "besides the responsibilities to the society a person has responsibilities to himself' [10, p. 22]. According to the scientist one of these responsibilities is making an independent decision on the purpose of life. The scientist called to pay more attention to thinking over and studying the essence and value of life. He wrote that "everyone should learn himself (herself) first of all and de