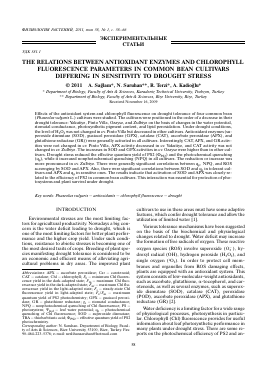 Effects of the antioxidant system and chlorophyll fluorescence on drought tolerance of four common bean (Phaseolus vulgaris L.) cultivars were studied. The cultivars were positioned in the order of a decrease in their drought tolerance: Yakutiye, Pinto Villa, Ozayse, and Zulbiye on the basis of changes in the water potential, stomatal conductance, photosynthetic pigment content, and lipid peroxidation. Under drought conditions, the level of H2O2 was not changed in cv. Pinto Villa but decreased in other cultivars. Antioxidant enzymes (superoxide dismutase (SOD), guaiacol peroxidase (GPX), catalase (CAT), ascorbate peroxidase (APX), and glutathione reductase (GR)) were generally activated in all cultivars. Interestingly, CAT, APX, and GR activities were not changed in cv. Pinto Villa, APX activity decreased in cv. Yakutiye, and CAT activity was not changed in cv. Zulbiye. The increases in SOD and GPX activities in cv. Ozayse were higher than in other cultivars. Drought stress reduced the effective quantum yield of PS2 (Ф^2) and the photochemical quenching (qp), while it increased nonphotochemical quenching (NPQ) in all cultivars. The reduction or increase was more pronounced in cv. Zulbiye. There were generally significant correlations between qp, NPQ, and ROS scavenging by SOD and APX. Also, there were significant correlations between SOD and qp in tolerant cultivars and APX and qp in sensitive ones. The results indicate that activation of SOD and APX was closely related to the efficiency of PS2 in common bean cultivars. This interaction was essential for protection of photosystems and plant survival under drought.

Environmental stresses are the most limiting factors for agricultural productivity. Nowadays a big concern is the water deficit leading to drought, which is one of the most limiting factors for better plant performance and the higher crop yield. Under such conditions, resistance to abiotic stresses is becoming one of the most desired traits of crops. Breeding of plant species manifesting drought tolerance is considered to be an economic and efficient means of alleviating agricultural problems in dry areas. The improved plant

cultivars to use in these areas must have some adaptive features, which confer drought tolerance and allow the utilization of limited water [1].

Various tolerance mechanisms have been suggested on the basis of the biochemical and physiological changes related to drought. Water deficit may increase the formation of free radicals of oxygen. These reactive

Water deficiency is a limiting factor for a wide range of physiological processes, photosynthesis in particular. Chlorophyll (Chl) fluorescence provides for useful information about leaf photosynthetic performance in many plants under drought stress. There are some reports on the photochemical efficiency of PS2 and an-

tioxidant mechanism under drought stress in tolerant and sensitive crop cultivars [3]. However, up to the best of knowledge, studies on interaction between the antioxidant defense mechanism and efficiency of PS2 are still limited for Phaseolus vulgaris cultivars differing in their drought tolerance. In order to understand better the response of common bean to drought stress, we studied chlorophyll (Chl) fluorescence together with the antioxidant system. The objective of this study was to classify bean cultivars according to their drought sensitivity and to determine effective antioxidant enzymes and their interrelations with chlorophyll fluorescence parameters in common bean cultivars differing in drought tolerance.

Greenhouse experiments. Plants were grown in plastic pots (16 cm high, 18 cm top and 12 cm bottom diameter) containing peat and sand (5 : 1), in a greenhouse at a temperature of 25 ± 2°C, a relative humidity of 60 ± 5%, and a light intensity of400 ^mol/(m2 s) for 30 days. Plants were maintained well watered by daily irrigation or under drought stress by withholding irrigation for 10 days. Leaves were harvested on the 10th day of drought at flowering stage. Tolerance level of common bean cultivars was firstly determined based on the changes in the water potential, stomatal conductance, photosynthetic pigment content, and lipid peroxidation.

Water potential. Leaf water potential (¥leaf) was measured with a PSYPRO thermocouple psychrome-ter ("Wescor", United States). Discs about 6 mm in diameter were cut from the youngest fully expanded leaves of plants and sealed in the C-52 psychrometer chamber. Samples were equilibrated for 60 min before the readings were recorded by a water potential data logger in the psychrometric mode.

Chlorophyll and carotenoid contents. Leaf samples (0.1 g) were selected randomly from the seedlings. The samples were homogenized in a mortar with 80% acetone. The extract was centrifuged at 5000 g for 5 min. Absorbance of the supernatants was recorded at 663, 645, and 450 nm spectrophotometrically. Total chlo-

rophyll (Chl) and carotenoid (Car) contents were estimated according to Arnon [4] and Jaspars [5], respectively.

Lipid peroxidation. Lipid peroxidation was measured in the term of MDA content (s = 155/(mM cm)), a product of lipid peroxidation, following the method of Heath and Packer [6]. Leaf samples (0.5 g) were homogenized in 10 ml of 0.1% trichloroacetic acid (TCA). The homogenate was centrifuged at 15000 g for 5 min. 4 ml of 0.5% thiobarbituric acid (TBA) in 20% TCA was added to the 1-ml aliquot of the supernatant. The mixture was heated at 95°C for 30 min and then quickly cooled in an ice bath. After centrifugation at 10000 g for 10 min, the absorbance of the supernatant was recorded at 532 and 600 nm. The MDA content was expressed as nmol MDA/g fr wt.

Chlorophyll fluorescence measurements. Chlorophyll fluorescence measurements were performed with an OS1-FL fluorometer ("OptiScience", United States) according to Zhang et al. [7]. A total of15 typical leaves were selected and dark-adapted for 20 min before the chlorophyll fluorescence was measured. The minimal fluorescence yield (F0) was determined under weak modulated ^660-irradiation (< 0.1 ^mol/(m2 s)). Maximum Chl fluorescence yield (Fm) was reached by exposing PS2 to saturating ^690 pulse (0.8 s) of white light (8000 ^mol/(m2 s)). After dark measurements, the leaves were exposed to an actinic light (5.5 W halogen lamp). Steady-state Chl fluorescence (Fs) was achieved after exposure to the actinic light for 10 min. The intensity of the actinic light was 120 ^mol pho-tons/(m2 s). Saturating pulses (0.8 s) of white light (8000 ^mol photons/(m2 s)) were applied to determine Fm., maximum fluorescence in the light. Fv/Fm and 0PS2 are indicators of the maximum and effective quantum yield of the PS2, respectively. The photochemical quenching (qp) and nonphotochemical quenching (NPQ) were calculated according to the equations: (Fm. - Fs)/(Fm. - F0) and (Fm - Fm)/Fm., respectively. Maximum quantum efficiency of open PS2 centers (Fv/Fm) and quantum yield of PS2 photochemistry (0PS2) were read by machine. All parameters were quantified in module 4 of the OS1-FL.