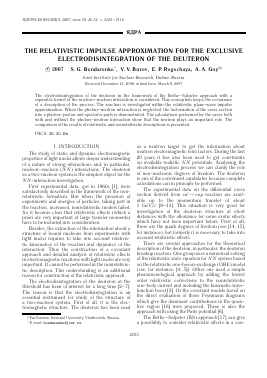 THE RELATIVISTIC IMPULSE APPROXIMATION FOR THE EXCLUSIVE ELECTRODISINTEGRATION OF THE DEUTERON

The electrodisintegration of the deuteron in the framework of the Bethe—Salpeter approach with a separable kernel of the nucleon—nucleon interaction is considered. This conception keeps the covariance of a description of the process. The reaction is investigated within the relativistic plane-wave impulse approximation. When the photon—neutron interaction is neglected, the factorization of the cross section into a photon—proton and spectator parts is demonstrated. The calculations performed for the cases both with and without the photon—neutron interaction show that the neutron plays an important role. The comparison of the results of relativistic and nonrelativistic descriptions is presented.

The study of static and dynamic electromagnetic properties of light nuclei allows deeper understanding of a nature of strong interactions and, in particular, nucleon—nucleon (NN) interactions. The deuteron as a two-nucleon system is the simplest object for the NN-interaction investigation.

First experimental data, got in 1960s [1], were satisfactorily described in the framework of the non-relativistic formalism. But when the precision of experiments and energies of particles, taking part in the reaction, increased, nonrelativistic models failed. So it became clear that relativistic effects (which a priori are very important at large transfer momenta) have to be included into consideration.

Besides, the extraction of the information about a structure of bound nucleons from experiments with light nuclei requires to take into account relativis-tic kinematics of the reaction and dynamics of the interaction. Thus the construction of a covariant approach and detailed analysis of relativistic effects in electromagnetic reactions with light nuclei are very important. It cannot be performed in the nonrelativis-tic description. This understanding is an additional reason for construction of the relativistic approach.

as a neutron target to get the information about neutron electromagnetic form factors. During the last 20 years it has also been used to get constraints on available realistic NN potentials. Analyzing the electrodisintegration process we can clarify the role of non-nucleonic degrees of freedom. The deuteron is one of the convenient candidates because complete calculations can in principle be performed.

The experimental data on the differential cross section derived from ed ^ enp reaction are available up to the momentum transfer of about 1 GeV/c [8—13]. This situation is very good for investigation of the deuteron structure at short distances with the allowance for some exotic effects which have not been important before. First of all, these are the quark degrees of freedom (see [14, 15], for instance), but formerly it is necessary to take into account relativistic effects.

There are several approaches for the theoretical description of the deuteron, in particular, the deuteron breakup reaction. One group uses a numerical solving of the relativistic wave equation for NN system based on the relativistic one-boson-exchange (OBE) model (see, for instance, [4, 5]). Other one used a simple phenomenological approach by adding the lowest order relativistic corrections to the nonrelativistic one-body current and including the kinematic wave-function boost [2]. Or the covariant models based on the direct evaluation of those Feynmann diagrams which give the dominant contributions in the quasifree region [16] were proposed. These is also the approach with using the Paris potential [6].

sistent way [18]. In the present paper the deuteron electrodisintegration within the covariant BS approach with the separable Graz-II interaction kernel is presented. The exclusive differential cross section is calculated in the relativistic impulse approximation (RIA) with plane waves in the final np state.

The paper is organized as follows. In Section 2 the relativistic kinematics of the reaction is considered, the formula for the cross section is presented. Sections 3 and 4 are devoted to the BS amplitude of the deuteron and np pair, respectively. The rela-tivistic consideration of the hadron current in the BS formalism is defined in Section 5. In Section 6 the nonrelativistic approach is taken up. The factorization of the cross section is discussed in Section 7. Then the results of our numerical calculations are presented in Section 8. Finally we review the results and outline further plans.

Let us consider the relativistic kinematics of the exclusive electrodisintegration of the deuteron. The initial electron l = (E, l) collides with the deuteron in the rest frame K = (Md, 0) (Md is the mass of the deuteron). There are three particles in the final state, i.e., the electron l' = (E', l') and a pair of the proton and the neutron. Neglecting the electron mass in the one-photon approximation, we can express the squared momentum of the virtual photon q = (u, q) via the electron scattering angle 9:

The np pair is described by the invariant mass s = = P2 = (pp + pn)2, which can be rewritten through components of the photon 4-momentum:

The Lorentz-invariant matrix element of the reaction (see Fig. 1) can be written as a product of lepton and hadron currents:

where {l',s'e\j^\l,se) = u(l',s'e)j^ u(l,se) is the electromagnetic current. The Dirac spinor u(l,se) (u(l',s'e)) describes the initial (final) electron with the spin projection se (s'e). The hadron current {np : (P,SmS)\J^\d : (K,M)) is the transition matrix element from the initial deuteron \d : (K,M)) with total momentum K and the projection M to the final np pair \np : (P,SmS)) with the total momentum P, spin S, projection ms. The unpolarized cross section of the electrodisintegration of the deuteron can be easily written as a product of electron (Pv) and hadron (W^v) parts:

with the kinematical factor R connecting the finalproton angle in the center-of-mass system (c.m.s.) (where the np pair is at rest) with the same in the laboratory system (l.s.):

The tensor of unpolarized leptons in (4) is expressed in the standard form:

and the hadron tensor can be written as a product of hadron currents with averaging-out by the deuteron angle momentum:

In most cases in order to average over initial and sum over final states it is convenient to introduce a helicity tensor which can be directly connected with structure functions (see, for example, [2, 5, 7]). These quantities allow to calculate polarization and asymmetry observables easily and will be necessary

in future (we did not calculate them in this work). Keeping in mind the Hermitian properties of the lepton and the hadron tensors, we can write the cross section as

where crMott = (a cos f/21? sin2 |)2 is theMott cross section for point-like particles and

where the spin-angular parts can be written as

For radial parts of the BS vertex function ga(ko, |k|) we use the covariant Graz-II kernel of NN interaction.

4. BETHE-SALPETER AMPLITUDE OF THE np PAIR

The B SA of the np pair xsmS (p; P, P) satisfies the inhomogeneous equation