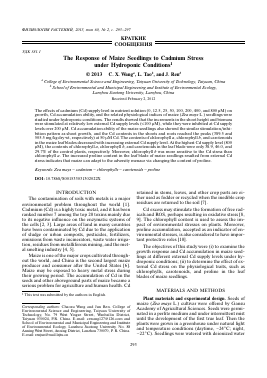 The Response of Maize Seedlings to Cadmium Stress under Hydroponic Conditions1

a College of Environmental Science and Engineering, Taiyuan University of Technology, Taiyuan, China

The effects of cadmium (Cd) supply level in nutrient solution (0, 12.5, 25, 50, 100, 200, 400, and 800 ^M) on growth, Cd accumulation ability, and the related physiological indices of maize (Zea mays L.) seedlings were studied under hydroponic conditions. The results showed that the increments in the shoot height and biomass were stimulated at relatively low external Cd supply levels (<100 цМ), while they were inhibited at Cd supply levels over 200 цМ. Cd accumulation ability of the maize seedlings also showed the similar stimulation/inhibition pattern as shoot growth, and the Cd contents in the shoots and roots reached the peaks (389.5 and 505.5 mg/kg dry wt, respectively) at 50 цМ Cd. The contents of chlorophyll a, chlorophyll b, and carotenoids in the maize leaf blades decreased with increasing external Cd supply level. At the highest Cd supply level (800 ^M), the contents of chlorophyll a, chlorophyll b, and carotenoids in the leaf blade were only 38.9, 46.0, and 29.7% of the control plants, respectively. Moreover, chlorophyll b was more sensitive to the Cd stress than chlorophyll a. The increased proline content in the leaf blade of maize seedlings resulted from external Cd stress indicates that maize can adapt to the adversity menace via changing the content of proline.

The contamination of soils with metals is a major environmental problem throughout the world [1]. Cadmium (Cd) is a highly toxic metal, and it has been ranked number 7 among the top 20 toxins mainly due to its negative influence on the enzymatic systems of the cells [2, 3]. Large areas of land in many countries have been contaminated by Cd due to the application of sludge or urban composts, pesticides, fertilizers, emissions from waste incinerators, waste water irrigation, residues from metalliferous mining, and the metal smelting industry [4, 5].

Maize is one of the major crops cultivated throughout the world, and China is the second largest maize producer and consumer after the United States [6]. Maize may be exposed to heavy metal stress during their growing period. The accumulation of Cd in the seeds and other aboveground parts of maize became a serious problem for agriculture and human health. Cd

retained in stems, leaves, and other crop parts are either used as fodder or recycled when the inedible crop residues are returned to the soil [7].

The objectives of this study were (i) to examine the growth response and Cd accumulation in maize seedlings at different external Cd supply levels under hy-droponic conditions; (ii) to determine the effect of external Cd stress on the physiological traits, such as chlorophylls, carotenoids, and proline in the leaf blades of maize seedlings.

Plant materials and experimental design. Seeds of maize (Zea mays L.) cultivar were offered by Gansu Academy of Agricultural Sciences. Seeds were germinated in a perlite medium and under intermittent mist until the development of the first true leaf. Then the plants were grown in a greenhouse under natural light and temperature conditions (daytime, ~24°C; night, ~22°C). Seedlings were watered with deionized water

After pre-cultured for 12 days, plants were subjected to full-strength modified Hoagland solution with different cadmium (Cd) supply levels. The treatments were as follows: control (without addition of Cd), 12.5, 25, 50, 100, 200, 400, and 800 ^M Cd, and cadmium was supplied as CdCl2 • 2.5 H2O. Each treatment was replicated three times. The nutrient solution was aerated and replaced every four days, and the pH was maintained at 5.8 by daily adjustment with 0.1 M HCl or 0.1 M NaOH. Plants were grown under controlled glasshouse conditions at a temperature of 27 ± 3°C, and relative humidity of 70 ± 3%.

The experiment was terminated, and the plants were harvested after they were grown in the metal-containing nutrient solution for 21 days. At harvest, roots of intact plants were rinsed with tap water and immersed in 20 mM Na2-EDTA for 15 min to remove Cd adhering to root surfaces. Roots were then washed for 5 min with deionized water. The plants were divided into two parts: shoots and roots. The lengths of shoots (from the apex of the leaf to the base of the stem) and roots (from the base of the stem to the tip of the taproot) were measured respectively. After fresh weights being determined, the samples were dried in a forced-air oven at 80°C for 48 h, and their dry weights were determined.

The analysis of cadmium content in plants. After grinding, portions of shoot and root samples were ashed in a muffle furnace at 500° C for 18 h, and the resulting ash was dissolved in 10 mL of concentrated HNO3 and diluted to a final volume of 50 mL with distilled water. These digested samples were the basis for the determination of Cd in plant tissues. The concentrations of Cd in the solutions were measured using inductively coupled plasma atomic emission spectrometry (ICP-AES).

Extraction and estimation of chlorophyll, caro-tenoid, and proline contents. The chlorophylls and car-otenoids were extracted from fresh leaf blades with 80% acetone. Pigments were determined by spectro-photometry according to the procedure described by Lichtenthaler [12] and using the following equations for the determination of concentrations of chlorophylls and carotenoids in the leaves:

Maize growth was normal at the cadmium (Cd) supply levels >200 ^M Cd. However, visual Cd toxicity symptoms with necrosis and browned root tips were observed in the roots of maize grown for 7 days at external Cd level of 400 ^M. The toxicity symptoms became more severe with increasing Cd supply level and exposure time. At 800 ^M, maize leaves wilted after the plants were grown for 7 days, and the old leaves began to fall off after growth for 14 days.

To explore the toxicity of Cd in maize seedlings, the content of chlorophylls and carotenoids in the leaf blades were determined. At the Cd supply levels of no more than 200 ^M, chlorophyll a content in the leaf