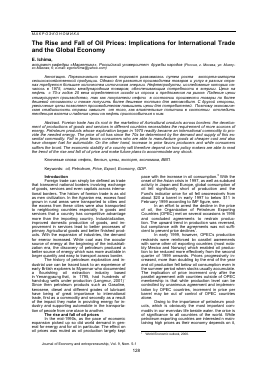 Текст научной статьи на тему «THE RISE AND FALL OF OIL PRICES: IMPLICATIONS FOR INTERNATIONAL TRADE AND THE GLOBAL ECONOMY»

﻿The Rise and Fall of Oil Prices: Implications for International Trade and the Global Economy

Abstract. Foreign trade has its root in the marketing of Agricultural products across borders; the development of productions of goods and services in different countries necessitates the requirement of more sources of energy. Petroleum products whose exploration began in 1975 readily became an international commodity to provide the needed energy. The price of oil has since the 70s be determined by the demand and supply of this essential commodity. Fall in price favors consumers who are able to manufacture goods at cheaper cost and also have cheaper fuel for automobile. On the other hand, increase in price favors producers and while consumers suffers the brunt. The economic stability of a country will therefore depend on how policy makers are able to read the trend of the rise and fall of oil price and make future plans to accommodate any shock.

Foreign trade can simply be defined as trade that transcend national borders involving exchange of goods, services and even capitals across international borders. The history of foreign trade is as old as men civilization. In the Agrarian era, excess food grown in rural areas were transported to cities and the excess from these cities were also transported to neighboring countries especially in goods and services that a country has competitive advantage more than the importing country. Industrialization, improved domestic production of goods, and improvement in services lead to better processes of primary Agricultural goods and better finished products. With the expansion of industries, the demand for energy increased. While coal was the popular source of energy at the beginning of the industrialization era, the discovery of petroleum produced a better source of energy which was more available in larger quantity and easy to transport across border.

The history of petroleum exploration and industrial use can be traced back to an experience of early British explorers to Myanmar who documented a flourishing oil extraction industry based in Yenangyaung that, in 1795, had hundreds of hand-dug wells under production (Longmur, 2001)" Since then petroleum products such as Gasoline, kerosene, diesel and different grades of lubricant have being of great importance to international trade, first as a commodity and secondly as a result of the impact they make in providing energy for industry and supporting automobile in the transportation of people from one place to another. The rise and fall of oil prices In the mid-1990s, as the pace of economic expansion picked up so did world demand in general for energy and for oil in particular. The effect on oil prices was muted as oil production largely kept

pace with the increase in oil consumption.5 With the onset of the Asian crisis in 1997, as well as subdued activity in Japan and Europe, global consumption of oil fell significantly short of production and the Fund's indicator price for oil fell progressively from about $20 a barrel in early 1997 to below $11 in February 1999 according to IMF figure, see.

In an effort to arrest the decline in the price of oil, the Organization of Petroleum Exporting Countries (OPEC) met on several occasions in 1998 and concluded agreements to restrain production. The upward trend in production was reversed, but compliance with the agreements was not sufficient to prevent price declines1.

In early 1999, however, OPEC's production restraints were reinforced by parallel agreements with some other oil exporting countries (most notably Mexico and Norway) which enabled oil production to be reduced more effectively from the second quarter of 1999 onwards. Prices progressively increased, more than doubling by the end of the year and oil production fell below oil consumption even in the summer period when stocks usually accumulate. The implication of price increment only after the parallel agreement with countries outside of OPEC membership is that while production level can be controlled by unanimous agreement and implementation by OPEC countries, increment in price per barrel may be out of control of OPEC countries alone.

Owing to the importance of petroleum products, which is obviously the most important commodity in our everyday life beside water, the price is of significance to all countries of the world. While petroleum exporting countries are interested n maintaining high prices as their economy depends on it,

E. Ichima The Rise and Fall of Oil Prices: Implications for In

countries like China and Western Europe that requires petroleum to support their manufacturing companies which is the man stay of their economy will constantly seek for a reduction in price. Countries that may not have well developed manufacturing sector also seek for a reduction in price as petroleum products are needed to run service, facilities and to also keep automobiles on the road beside

al Trade and the Global Economy

generation of electricity and other things that petroleum products are used for, not to mention that imported goods will come at cheaper prices if the manufactures spend less on energy. Thus if an opinion poll is conducted among all the countries of the world to find out if prices should be kept high or low, the result will definitely be in favor of low price.

High oil price make different impact on different countries depending on their dependence on oil, either directly or indirectly as mentioned above. The following are IMF research department summary (2000) on various scenario that high price of oil could have impact on global economy.

1. It can lead to a transfer of income from oil consumers to oil producers. As the propensity to spend of those who lose income (energy consumers) is generally larger than the propensity to spend of those who gain income (energy producers). On an international level, the transfer is from oil importing countries to oil exporters, and oil exporters tend to expand demand only gradually (in the past, they have spent about 1/3 of their additional revenues after one year, rising to 75 percent after 3 years). In addition, a reduction in demand can also occur within producing countries that allow higher oil prices to feed through to consumers, as energy producers tend to have a lower propensity to consume than energy consumers.

• There will be a rise in the cost of production of goods and services in the economy, given the increase in the relative price of energy inputs, putting pressure on profit margins, the multiplier effect in this rise in cost of production will be increase in cost of export goods. As the oil intensity of production in advanced countries has fallen over the past three decades. The supply side impact for a given increase in oil prices can be expected to be less than in past episodes. In developing countries, however, where the oil intensity of production has declined less, the impact may be closer to that in the earlier period.

• There will be an impact on the price level and on inflation. Its magnitude will depend on the degree of monetary tightening and the extent to which consumers seek to offset the decline in their real incomes through higher wage increases, and producers seek to restore profit margins. These responses can create a wage/price spiral, as was the case, for example, during the oil shocks in the 1970s.

• There will be both direct and indirect impact on financial markets. Actual as well as

• Finally, depending on expected duration of price increases, the change in relative prices creates incentives for suppliers of energy to increase production (to the extent that there is scope for doing so) and investment, and for oil consumers to economize.

The Impact of high oil prices on Industrial Countries

For the industrial countries as a group, real GDP falls 0.3 percentage points below the baseline in 2001 and 2002 before recovering subsequently, while real domestic demand follows a similar profile but with a somewhat greater short-term loss of 0.4 percentage points because of negative terms-of-trade effects. The impact on activity and demand in the United States and euro area are somewhat larger than the industrial country average, while the impact on the group "other industrial countries" is smaller than the average because the largest two members of this group-the United Kingdom and Canada-are