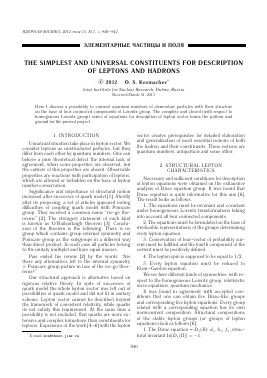 THE SIMPLEST AND UNIVERSAL CONSTITUENTS FOR DESCRIPTION

OF LEPTONS AND HADRONS

Here I discuss a possibility to connect quantum numbers of elementary particles with their structure on the base of four connected components of Lorentz group. The complete and closed (with respect to homogenous Lorentz group) series of equations for description of lepton sector forms the pattern and ground for the present project.

Unnatural situation take place in lepton sector. We consider leptons as unstructured particles, but they differ from each other by quantum numbers. One can believe a pure theoretical defect the internal lack of agreement, when some properties are observed, but the carriers of this properties are absent. Observable properties are reactions with participation of leptons, which are allowed or forbidden on the base of lepton number conservation.

Significance and importance of structural notion increased after successes of quark model [1]. Shortly after its proposing, a set of articles appeared noting difficulties of coupling quark model with Poincare group. They received a common name "no-go theorems" [2]. The strongest statement of such kind is known as O'Raifeartaigh theorem [3]. Conclusion of the theorem is the following. There is no group which contains group internal symmetry and Poincare group as the subgroups in a different way than direct product. In such case all particles belong to the unitary multiplet and have equal masses.

Pais ended his review [2] by the words: "Are there any alternatives left to the internal symmetry ® Poincare group picture in face of the no-go theorems?"

Our structural approach is alternative based on rigorous relative theory. In spite of successes of quark model the whole lepton sector was left out of possibilities of quark model and did not fit in unitary scheme. Lepton sector cannot be described beyond the framework of consistent relativity, while quarks do not satisfy this requirement. At the same time a possibility is not excluded, that quarks are more extensive and complex formations than constituents for leptons. Experience of the work [4—6] with the lepton

sector creates prerequisites for detailed elaboration and generalization of most essential notions of both the hadron and their constituents. These notions are quantum numbers, antiparticle and some other.

Necessary and sufficient conditions for description of lepton equations were obtained on the exhaustive analysis of Dirac equation group. It was found that Dirac equation is quite informative for this aim [6]. The result looks as follows.

1. The equations must be invariant and covariant under homogeneous Lorentz transformations taking into account all four connected components.

2. The equations must be formulated on the base of irreducible representations of the groups determining every lepton equation.

5. Every lepton equation must be reduced to Klein—Gordon equation.

THE SIMPLEST AND UNIVERSAL CONSTITUENTS

Here, dY, bY, cY, fY are subgroups of lepton group which realize four irreducible representations of Lorentz group; In[DY(...)] is a numerical characteristic of DY(...) irreducible matrix group which takes tree values ±1 or 0 [7]. It was called structural invariant.

The simple enumeration of all possibilities based on structure invariants of the four conjugate components and possible invariants of equations in the whole provides the statement that there are no other stable leptons in the framework of the assumptions and requirements formulated above.

Further study of the lepton problem showed that one can obtain additional Dirac-like equations in the framework of the previous five assumptions. This problem is solved by introducing an additional (fifth) generator for obtaining new groups of the wave equations [5]. It was found that there are three and only three possibilities (Ai, A3, A2) admitting the interpretation as new of wave equations with additional characteristics. In this case the new groups contain substructures coinciding with the group having a physical interpretation in terms of stable leptons. This is the difference from groups of stable leptons that provide their interpretation as unstable if the particle mass turns out to be larger than the sum of masses of decay particle.

Composition of the unstable lepton groups.

All three groups have their own structures as the stable one. We see that four conjugate components of Lorentz group allowed to describe different leptons due to complication of structural constituents.

3. SOME CONSEQUENCES AND PERSPECTIVES

The obtained results allow to make the following conclusions. They are statement of the facts.

I. All leptons possess structural individual characteristics. They are related with properties of lepton relativistic wave equations.

II. The simplest constituents of these structures are four connected components of homogeneous Lorentz group. Four groups, which realized these connected components, were obtained in an explicit infinitesemal form. These groups and representations corresponding to them are:

III. So-called intrinsic symmetries of the leptons are reflection or conversion space—time symmetries taking into account P, T, (PT) inversion and symmetries of relativistic quantum mechanics. Their totality can be called condition to be an observable particle.

IV. All distinctions between leptons and possibilities of their specification by means of quantum numbers are determined by individual structure of every lepton equation. The complication of the internal structures leads to additional characteristics.

It should be noted the completeness of the whole set of the represented solutions. It is impossible to add any solution above the one obtained in the framework of the accepted suppositions. This is a simple but rigorous corollary from the group theoretical requirements.

Description of hadrons and leptons on the common basis requires generalization and specification of some basic notions. For example, it is necessary to differentiate by mathematical language observable particles and unobservable particle-like objects having definite quantum numbers, necessary to generalize a notion of particle—antiparticle and so on.

Antiparticles. Exhaustive analysis of the lepton equation groups shows that necessary condition for description of particle and antiparticle in the frame of the same equation is a presence of T-conjugate representations in the group of this equation. Conjugate components allowed to generalize this notion for any structural combination of the components including any components of hadron. All conjugate components of Lorentz group are connected between themselves by means of P, T, and (PT) inversions [6].

The common foundation of leptons and hadrons will serve for understanding generality and distinction between weak and strong interactions.