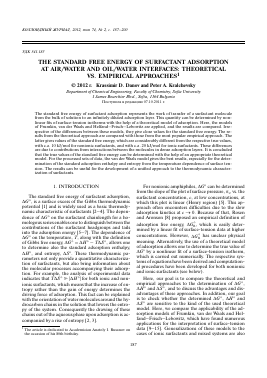 The standard free energy of surfactant adsorption represents the work of transfer of a surfactant molecule from the bulk of solution to an infinitely diluted adsorption layer. This quantity can be determined by nonlinear fits of surface-tension isotherms with the help of a theoretical model of adsorption. Here, the models of Frumkin, van der Waals and Helfand—Frisch—Lebowitz are applied, and the results are compared. Irrespective of the differences between these models, they give close values for the standard free energy. The results from the theoretical approach are compared with those from the most popular empirical approach. The latter gives values of the standard free energy, which are considerably different from the respective true values, with c.a. 10 kJ/mol for nonionic surfactants, and with c.a. 20 kJ/mol for ionic surfactants. These differences are due to contributions from interactions between the molecules in dense adsorption layers. It is concluded that the true values of the standard free energy can be determined with the help of an appropriate theoretical model. For the processed sets of data, the van der Waals model gives the best results, especially for the determination of the standard adsorption enthalpy and entropy from the temperature dependence of surface tension. The results can be useful for the development of a unified approach to the thermodynamic characterization of surfactants.

The standard free energy of surfactant adsorption, AG°, is a surface excess of the Gibbs thermodynamic potential [1] and is widely used as a basic thermodynamic characteristic of surfactants [2—4]. The dependence of AG ° on the surfactant chainlength for a homologous series enables one to distinguish between the contributions of the surfactant headgroups and tails into the adsorption energy [5—7]. The dependence of AG° on the temperature, T, along with the definition of Gibbs free energy, AG ° = AH° — TAS°, allows one to determine also the standard adsorption enthalpy, AH°, and entropy, AS°. These thermodynamic parameters not only provide a quantitative characterization of surfactants, but also bring information about the molecular processes accompanying their adsorption. For example, the analysis of experimental data indicates that TAS° > \AH°| for both ionic and non-ionic surfactants, which means that the increase of entropy rather than the gain of energy determines the driving force of adsorption. This fact can be explained with the orientation ofwater molecules around the hydrocarbon chains in the solution that lowers the entropy of the system. Consequently the drawing of these chains out of the aqueous phase upon adsorption is accompanied by a rise of entropy [2, 3].

1 The article is dedicated to Academician Anatoly I. Rusanov on the occasion of his 80th birthday.

For nonionic amphiphiles, AG° can be determined from the slope of the plot of surface pressure, ns, vs. the surfactant concentration, c, at low concentrations, at which this plot is linear (Henry region) [5]. This approach often encounters difficulties due to the slow adsorption kinetics at c ^ 0. Because of that, Rosen and Aronson [8] proposed an empirical definition of

adsorption free energy, AGR, which is easily determined by a linear fit of surface-tension data at higher

concentrations. However, A GR has unclear physical meaning. Alternatively, the use of a theoretical model of adsorption allows one to determine the true value of AG° by a nonlinear fit of a surface-tension isotherm, which is carried out numerically. The respective systems of equations have been derived and computational procedures have been developed for both nonionic and ionic surfactants (see below).

Here, our goal is to compare the theoretical and empirical approaches to the determination of AG°, AH ° and AS °, and to discuss the advantages and disadvantages of these approaches. In addition, our goal is to check whether the determined AG °, AH ° and AS ° are sensitive to the kind of the used theoretical model. Here, we compare the applicability of the adsorption models of Frumkin, van der Waals and Helfand—Frisch—Lebowitz, which have found numerous applications for the interpretation of surface-tension data [9—15]. Generalizations of these models to the cases of ionic surfactants and mixed systems are also

available [16—20]. In the present study, these models are used to determine AG ° in the cases of air/water and oil/water interfaces, as well as of nonionic and ionic surfactants. The results can be helpful for the development of a unified approach to the thermodynamic characterization of surfactants.

Following Ref. [5, 21], let us consider the case of low adsorption of a nonionic surfactant at the solution's surface. In this case, the approximation for an ideal solution can be applied to both the bulk solution and adsorption layer. Setting equal the chemical potentials of the surfactant molecules in the bulk and at the surface, we obtain:

where c and cs are the surfactant concentrations in the

bulk and in the adsorption layer; and are the respective standard chemical potentials; k is the Boltz-mann constant and T is the absolute temperature. By definition, the standard free energy of surfactant adsorption is [5, 22, 23]:

AG° expresses the standard work for transfer of a surfactant molecule from the bulk of solution to an infinitely diluted adsorption layer at the surface. For the sake of brevity, hereafter we will call true standard adsorption free energy only this one, which is estimated on the basis of Eq. (2). The combination of Eqs. (1) and (2) yields [5, 21, 24, 25]:

As mentioned above, there can be practical difficulties to apply Eq. (5) for determining AG ° from the slope of the ns(c) isotherm at low concentrations. For this reason, Rosen and Aronson [8] proposed an empirical definition of standard adsorption free energy, AGR, which is widely used in practice, but gives a quantity that is different from AG°. Their approach is based on the Gibbs adsorption equation [27]:

It is convenient to define the thickness of the adsorption layer, 5, as the length of the surfactant molecule. Because AG° depends on ln(5), the standard adsorption free energy is not too sensitive to the definition of

For many surfactants and interfaces, the adsorption r is almost constant in a relatively wide region below the critical micellization concentration (CMC), where a dense layer corresponding to adsorption r = rd is formed. Setting r = rd = const. in Eq. (6) and integrating, one obtains [8]:

and Aronson, the term AGR can be considered as a characteristic surfactant adsorption free energy, which is defined by Eq. (7).

To determine AGR, the experimental data for ns(c) are to be plotted as kTLn(c/®) vs. ns in accordance with Eq. (7). This is illustrated in Fig. 1a with data for the nonionic surfactant Triton X-100 obtained by Jan'czuk et al. (the same as in Ref. [28]) and in Fig. 1b with data for n-alkanoic (fatty) acids from [7]. As seen, in a wide region of ns values the experimental data comply with a straight line. In view of Eq. (7) the slope and intercept of the linear regression give, respectively, rd and AGR. In the case of Triton X-100 (Fig. 1a), rd is the adsorption at the CMC. In the case of fatty acids (Fig. 1b), which are below the Krafft point, rd is the adsorption at the separation of fatty-acid phase (droplets or crystallites). As seen in Fig. 1, at the lower sur-

Fig. 1. Plots of experimental data for ns(c) in accordance

with Eq. (7); AGR is determined from the intercept of the linear regression. (a) Data for Triton X-100 at three temperatures from [28]. (b) Data for «-alkanoic (fatty) acids, from pentanoic to undecanoic from [7]; the number of carbon atoms in each acid is denoted on the respective curve; T = 22°C.