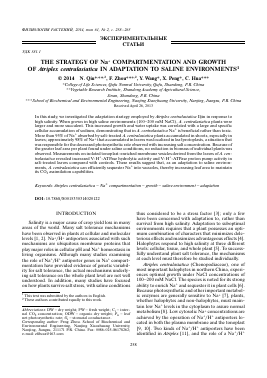 In this study, we investigated the adaptation strategy employed by Atriplex centralasiatica Iljin in response to high salinity. When grown in high saline environments (100-200 mM NaCl), A. centralasiatica plants were larger and more succulent. This increased growth and water uptake was correlated with a large and specific cellular accumulation of sodium, demonstrating that in A. centralasiatica Na+ is beneficial rather than toxic. More than 95% of Na+ absorbed by salt-treated A. centralasiatica plants accumulated in shoots, especially in leaves; approximately 98% of Na+ that accumulated in leaves was localized in leaf protoplasts, a situation that was responsible for the decreased photosynthetic rate observed with increasing salt concentration. Because of the greater leaf area per plant found under saline conditions, no reduction in biomass of individual plants was observed. Measurements on isolated tonoplast-enriched membrane vesicles derived from the leaves of A. centralasiatica revealed increased V-H+-ATPase hydrolytic activity and V-H+-ATPase proton pump activity in salt-treated leaves compared with controls. These results suggest that, as an adaptation to saline environments, A. centralasiatica can efficiently sequester Na+ into vacuoles, thereby increasing leaf area to maintain its CO2 assimilation capabilities.

Salinity is a major cause of crop yield loss in many areas of the world. Many salt tolerance mechanisms have been observed in plants at cellular and molecular levels [1, 2]. Na+/H+ antiporters associated with such mechanisms are ubiquitous membrane proteins that play major roles in cellular pH and Na+ homeostasis in living organisms. Although many studies examining the role of Na+/H+ antiporter genes in Na+ compartmentation have provided evidence of genetic variability for salt tolerance, the actual mechanisms underlying salt tolerance on the whole plant level are not well understood. In addition, many studies have focused on how plants survive salt stress, with saline conditions

thus considered to be a stress factor [3]; only a few have been concerned with adaptation to, rather than survival from high salinity. Adaptation to suboptimal environments requires that a plant possesses an optimum combination of characters that minimizes deleterious effects and maximizes advantageous effects [4]. Halophytes respond to high salinity at three different levels: cellular, tissue, and whole plant [5]. To successfully understand plant salt tolerance, the mechanisms at each level must therefore be studied individually.

Atriplex centralasiatica (Chenopodiaceae), one of most important halophytes in northern China, experiences optimal growth under NaCl concentrations of 100-200 mM NaCl. The species is noted for its strong ability to enrich Na+ and sequester it in plant cells [6]. Because photosynthetic and other important metabolic enzymes are generally sensitive to Na+ [7], plants, whether halophytes and non-halophytes, must maintain low Na+ levels in the cytoplasm to assure normal metabolism [8]. Low cytosolic Na+ concentrations are achieved by the operation of Na+/H+ antiporters located in both the plasma membrane and the tonoplast [9, 10]. Two kinds of Na+/H+ antiporters have been identified in Atriplex [11], and the role of a Na+/H+

antiporter gene isolated from A. gmelini has been confirmed by its introduction into rice [12]. An important issue with respect to transgenic plants engineered for salt tolerance has been ignored, however: although the salt-sensitive rice cultivar expressing a Na+/H+ antiporter gene from Atriplex exhibits improved salt tolerance, it has no uniform adaptation to high salinity, such as that found in Atriplex plants. Salinity is still a stress for transgenic plants and reduces their growth, whereas optimal salinity is beneficial to euhalophytes like Atriplex and improves their growth. A. centralasi-atica is an euhalophyte with efficient mechanisms for Na+ compartmentation. Understanding this species, adaptation mechanisms to salt may be useful for improving salt tolerance in glycophytic crop species. In this study, we examined the Na+ compartmentation mechanism employed by A. centralasiatica in response to high salinity, which allows this species to not only survive, but to also thrive under a varied range of high saline conditions (100-200 mM NaCl).

Plant material and growth conditions. Seeds of Atriplex centralasiatica Iljin (collected from Yellow River Delta, Shandong Province, China) were germinated in sand moistened with half-strength Hoagland solution. When the seedlings had 4-5 leaves, uniform seedlings were chosen and cultured in an aerated half-strength Hoagland solution (pH 5.7) for 7-10 days. Seedlings were then treated with full-strength nutrient solution (as a control) or subjected to salt treatment in increments of 50 mM NaCl every 12 h to the final concentration, to avoid salt shock. Salt treatments consisted of 0, 100, 200, 300, and 400 mM, and final salinity level was achieved in the same day (the 0 mM NaCl treatment actually contained 2 mM NaCl that was present in the Hoagland solution). Nutrient solutions were renewed every 2 days. Seedlings were grown in a greenhouse under conditions of 60-80% relative humidity, 25-35/20-25°C day/night temperature, a 16-h photoperiod, and an illumination of approximately 600 ^mol/(m2 s) photon flux density. Seedlings were harvested 7 days after reaching the final NaCl concentration.

Fresh weight, dry weight, organic dry weight, and degree of leaf succulence. Fresh weight (FW), dry weight (DW), and organic dry weight (ODW) of individual plants were determined gravimetrically on day 7 after reaching the final NaCl concentration. Ashing of dry samples was carried out at 500°C in a muffle furnace to obtain ash weight (AW). ODW was calculated by subtracting AW from DW. The degree of leaf succulence was defined as the ratio of FW to DW.

Na+ concentrations in A. centralasiatica organs.

Dry samples of A. centralasiatica organs were weighed and ashed at 500°C in a muffle furnace. The ash was then dissolved in concentrated nitric acid and diluted

with distilled water; the Na+ concentration of the solution was measured using a Z-8000 atomic absorption spectrometer ("Hitachi", Japan).

Na+ concentrations in the apoplast and protoplasts.

Apoplastic sap was collected from leaves using the method of Tetlow and Farrar [13]. Leaves of A. cen-tralasiatica plants were harvested and placed into a syringe, with leaf petiole oriented towards the bottom. The syringe was centrifuged at 1000 g (15 min at 4°C) with its tip embedded in an Eppendorf tube (0.5 mL) so that the sap would flow into the Eppendorf tube under centrifugal force. The collected liquid was diluted with distilled water, and Na+ concentration (Ca) was measured using a Z-8000 atomic absorption spectrometer ("Hitachi"). The mean Na+ concentration in protoplasts was calculated as described by Flowers and Yeo [14], assuming an apoplast to protoplast liquid volume ratio of 3 : 97. The calculation was performed according to the equation Cp = (T - CaVa)/Vp, where T is the Na+ content in fresh leaf tissue (equal to the sum of the Na+ content in the apoplast and protoplasts), Ca is the concentration of Na+ in the apoplast, Va is the volume of apoplastic sap, and Vp is the protoplast volume. For use in the above equation, T (the Na+ content in fresh leaves) was measured using an atomic absorption spectrometer as described previously; Va and Vp (apoplast and protoplast liquid volumes, respectively) were calculated from Va = Vt x 3% and Vp = Vt x 97%, where Vt, the total volume of liquid per gram of fresh tissue, was obtained by multiplying tissue water content x 1 mL.

Membrane vesicle isolation. Tonoplast-enriched membrane vesicles were isolated according to the method of Wang et al. [15]. Leaves were washed with cold deionized water and homogenized in extraction solution (50 mM Tricine-Tris (pH 7.5), 3 mM EGTA, 3 mM MgSO4, 0.5% (v/v) PVP, 2 mM DTT, 0.2 mM PMSF, 5% (v/v) glycerol, and sufficient mannitol, so that the solution had the same osmotic potential as the leaves); 2 mL of the extraction solution was used for each 2 g of fresh material. The homogenate was filtered through