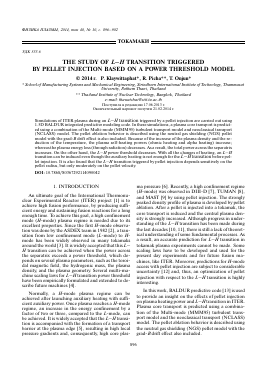 Simulations of ITER plasma during an L-H transition triggered by a pellet injection are carried out using 1.5D BALDUR integrated predictive modeling code. In these simulations, a plasma core transport is predicted using a combination of the Multi-mode (MMM95) turbulent transport model and neoclassical transport (NCLASS) model. The pellet ablation behavior is described using the neutral gas shielding (NGS) pellet model with the grad-B drift effect is also included. Because of the increase of the plasma density and the reduction of the temperature, the plasma self-heating powers (ohmic heating and alpha heating) increase; whereas the plasma energy loss (through radiation) decreases. As a result, the total power across the separatrix increases. On the other hand, the L-H power threshold decreases. With all the changes of heating, an L-H transition can be induced even though the auxiliary heating is not enough for the L-H transition before pellet injection. It is also found that the L-H transition triggered by pellet injection depends sensitively on the pellet radius, but only moderately on the pellet velocity.

An ultimate goal of the International Thermonuclear Experimental Reactor (ITER) project [1] is to achieve high fusion performance, by producing sufficient energy and sustaining fusion reactions for a long enough time. To achieve this goal, a high confinement mode (H-mode) plasma regime is needed due to its excellent properties. Since the first H-mode observation was done by the ASDEX team in 1982 [2], a transition from low confinement mode (L-mode) to H-mode has been widely observed in many tokamaks around the world [3]. It is widely accepted that this L— H transition can be achieved when the power across the separatrix exceeds a power threshold, which depends on several plasma parameters, such as the toroidal magnetic field, the hydrogenic mass, the plasma density, and the plasma geometry. Several multi-machine scaling laws for L—H transition power threshold have been empirically formulated and extended to describe future machines [4].

Normally, a H-mode plasma regime can be achieved after launching auxiliary heating with sufficient auxiliary power. Once plasma reaches a H-mode regime, an increase in the energy confinement by a factor of two or three, compared to the L-mode, can be achieved. It is widely accepted that the L—H transition is accompanied with the formation of a transport barrier at the plasma edge [5], resulting in high local pressure gradients and, consequently, high core plas-

ma pressure [6]. Recently, a high confinement regime (H-mode) was observed in DIII-D [7], TUMAN [8], and MAST [9] by using pellet injection. The strongly peaked density profile of plasma is developed by pellet ablation. After a pellet is injected into a tokamak, the core transport is reduced and the central plasma density is strongly increased. Although progress in understanding of the L—H transition has been made during the last decades [10, 11], there is still a lack of theoretical understanding of some fundamental processes. As a result, an accurate prediction for L—H transition in tokamak plasma experiments cannot be made. Some scaling laws have to be developed and used for the present day experiments and for future fusion machines, like ITER. Moreover, predictions for H-mode access with pellet injection are subject to considerable uncertainty [12] and, thus, an optimization of pellet injection with respect to the L—H transition is highly interesting.

In this work, BALDUR predictive code [13] is used to provide an insight on the effects of pellet injection on plasma heating power and L—H transition in ITER. Plasma core transport is predicted using a combination of the Multi-mode (MMM95) turbulent transport model and the neoclassical transport (NCLASS) model. The pellet ablation behavior is described using the neutral gas shielding (NGS) pellet model with the grad-B drift effect also included.

Since the plasma edge depends sensitively on the local heat flux, the power flow through the edge is very important [14]. For this reason, the standard working hypothesis, supported by many observations, is that H-mode occurs when the power transported across the separatrix (Psep), exceeds a threshold value [4] (Psep > Pthr). All of the simulations with BALDUR start with this assumption, where firstly the plasma is in ohmic stage and proceeds to the L-mode and H-mode stages of the discharge as auxiliary heating power is applied. The power transported across the separatrix (P^) and the power threshold (Pthr) are defined as follows:

mass, respectively. The number of atoms in the pellet, N, is expressed as:

where ns is the molecular density of the solid hydrogen

(ns = 3.12 x 1028 m-3). For the mass relocation model, a scaling model of pellet drift displacement, based on the grad-B induced pellet drift [17], has been taken into account in the pellet injection module in this work as follows:

BALDUR uses the assumption (Psep > Pthr) to determine the transition from L-mode to H-mode. The power threshold for the back transition PH ^ L is also modeled in BALDUR and the H-mode phase is terminated when Psep decreases below a pre-set factor of PL^H. Here PH^L/PL^H = 75% is assumed [1].

where N, ne (m-3), Te (eV), rp (m), and Mi (u) are the number of particles in a pellet, the electron density, the electron temperature, the pellet radius, and the pellet

where ne0 and Te0 are the electron density and the temperature at the plasma core axis, respectively. This drift model scales the drift displacement drift with pellet velocity vp, injection angle 9, minor radius a0, major radius R0, toroidal magnetic field strength at the axis Bt and plasma elongation k. The impact parameter A of the pellet trajectory is normally ignored in the drift calculation. The coefficients and power parameters cs (s = 1, 2, ..., 13) in equation (5) are described in [17].

Since the neutrals cannot be confined by the magnetic field, for transport modeling they should be treated in a manner different from charged particles. In BALDUR the neutral gas source terms are computed using a Monte Carlo algorithm [18]. The calculation involves computing the trajectories of a specified number of sample particles, and then using these trajectories to calculate the source rates to be used by the energy and particle balance equations. Up to three types of neutral sources are computed for each hydrogen species: edge sources due to the recycling of plasma ions and neutrals, edge sources due to gas puffing and volume sources due to charge exchange between injected beam neutrals and plasma ions, and due to radiative recombination of plasma ions and electrons. The Monte Carlo algorithm in the present version of BALDUR includes the approximation that neutrals are launched after every charge-exchange event from the Maxwellian distribution characterized by the local thermal ion temperature Tj [19].

Simulations of ITER plasma are carried out using a BALDUR integrated predictive modeling code, where a pellet is applied at 600 s after the plasma reaches its quasi-steady state. It is assumed in this work that there are only four plasma species considered: two working gas species (deuterium and tritium) and two impurity species (helium and beryllium). The effect of ELMs is not considered in this work. The electron temperature and the electron density profiles are obtained from the