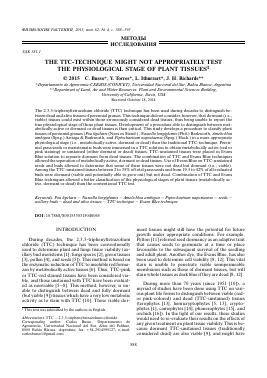 The 2,3,5-triphenyltetrazolium chloride (TTC) technique has been used during decades to distinguish between dead and alive tissues of perennial grasses. This technique did not consider, however, that dormant (i.e., viable) tissues could exist within those erroneously considered dead tissues, thus being unable to report the true physiological stage of those plant tissues. Development of a procedure able to distinguish between met-abolically active or dormant or dead tissues is then critical. This study develops a procedure to classify plant tissues of perennial grasses (Poa ligularis (Nees ex Steud.), Nassella longiglumis (Phil.) Barkworth, Amelichloa ambigua (Speg.) Arriaga & Barkworth, and Piptochaetium napostaense (Speg.) Hack.) in a more appropriate physiological stage (i.e., metabolically active, dormant or dead) than the traditional TTC-technique. Perennial grass seeds or meristematic buds were immersed in a TTC solution to obtain metabolically active (red or pink staining) or unstained (either dormant or dead) tissues. TTC-unstained tissues were placed in Evans Blue solution to separate dormant from dead tissues. The combination of TTC and Evans Blue techniques allowed the separation of metabolically active, dormant or dead tissues. Use of Evans Blue on TTC-unstained seeds and buds allowed to determine that some of these tissues were not dead but dormant (i.e., viable). Among the TTC-unstained tissues between 2 to 35% of total grass seeds and from 19.5 to 42% of all evaluated buds were dormant (viable and potentially able to grow out) but not dead. Combination of TTC and Evans Blue techniques allowed a better classification of the physiological stages of plant tissues (metabolically active, dormant or dead) than the conventional TTC test.

During decades, the 2,3,5-triphenyltetrazolium chloride (TTC) technique has been conventionally used to determine plant and fungi tissue viability (axillary bud meristems [1], fungi spores [2], green tissues [3], pollen [4], and seeds [5]). This method is based on the enzymatic reduction of TTC to insoluble red forma-zan by metabolically active tissues [6]. Thus, TTC-pink or TTC-red stained tissues have been considered viable, and those unstained with TTC have been evaluated as nonviable [5—8]. This method, however, is unable to distinguish between dead and fully dormant (but viable [9]) tissues which have a very low metabolic activity as to stain with TTC [10]. These viable dor-

mant tissues might still have the potential for future growth under appropriate conditions. For example, Pelton [11] referred seed dormancy as an adaptive trait that causes seeds to germinate at a time or place favourable to the subsequent survival of the seedling and adult plant. Another dye, the Evans Blue, has also been used to determine cell viability [8, 12]. This vital stain is unable to penetrate viable semipermeable membranes such as those of dormant tissues, but will stain whole tissues as dark blue if they are dead [8, 12].

During more than 70 years (since 1951 [10]), a myriad of studies have been done using TTC on various plant life forms to distinguish between viable (redor pink-colored) and dead (TTC-unstained) tissues (terophytes [13], hemicryptophytes [5, 13], crypto-phytes [1], camephytes [14], phanerophytes [15], and orchids [16]). In the light of our results, these studies would need to re-evaluate their results on the effects of any given treatment on plant tissue viability. This is because dormant TTC-unstained tissues (traditionally considered dead) are also viable [9], and might have

the potential for growth and development in adequate conditions. Our study is a plea for combining the traditional TTC-unstained tissues with the vital stain Evans Blue to allow a more precise assessment of the physiological state of various plant tissues as dormant or dead. Recently, Hilhorst [9] reported the need of developing a viability test to distinguish dead from dormant seeds.

We hypothesize that TTC-unstained bud or seed tissues might not be dead but dormant (and thus viable). The objectives of this study were (1) to demonstrate that TTC-unstained tissues might not be necessarily dead but dormant, and (2) to combine the conventional TTC-technique with the vital stain Evans Blue to better classify the physiological stage of seed and bud tissues as metabolically active, dormant (but viable) or dead. To test our hypothesis, we used plant tissues ofvarious native perennial grasses of southwestern Buenos Aires, Argentina.

Bud viability. During spring 2013, Poa ligularis (Nees ex Steud.), Nassella longiglumis (Phil.) Barkworth, and Amelichloa ambigua (Speg.) Arriaga & Barkworth plants were randomly collected at the field (40°39'49.7'' S, 62°53'6.4'' W, 40 m.a.s.l.). These cool-season perennial grass species are native to the Monte Phytogeographical Province [17]. Five axillary buds were obtained per plant to determine their degree of metabolic activity after dissecting tillers. After dissection, each stem base was cut longitudinally with a razor blade, leaving entire tiller buds on each side of the cut. Both halves were immersed in test tubes containing 25 mL of 0.6% (w/v) TTC ("Santa Cruz Biotechnology Inc.", USA) in phosphate buffer (0.05 M Na2HPO4-KH2PO4, pH 7.4) with a 0.05% (v/v) wetting agent (Tween 20), and incubated in darkness at 30°C for 15 h [6]. Thereafter, both halves were rinsed using distilled water and observed again under a stereoscopic microscope ("Nikon", 10x). TTC staining indicates enzymatic reduction of the tet-razolium salt to insoluble red formazan by living, respiratory active tissues [10]. The TTC accepts electrons from the electron transport chain of the mitochondria, and as a result it is converted to formazan within viable cells with fully active mitochondria [18].

Bud was considered metabolically active when the apex stained pink or red. Buds that remained unstained (either dormant or dead) after incubation with the TTC solution and were not visibly necrotic, were tested using the vital stain Evans Blue ("Santa Cruz Biotechnology, Inc."; colour index number is 23860; 0.25% w/v). Evans Blue leaks through the ruptured membranes and stains the contents of dead cells [8]. Longitudinal sections of TTC-unstained buds were soaked in Evans Blue for 30 min at room temperature (20°C). Excess dye was rinsed from the sections, which were then mounted in water and examined under a microscope (Leica ICC50). Bud tissues which remained uncolored with

Evans Blue were classified as dormant but viable [8, 9], while those which stained dark blue were considered dead. Immersion of some buds in boiling water assured us that those buds were dead.

Seed viability. These determinations were made on another native perennial grass of central Argentina — Piptochaetium napostaense (Speg.) Hack., also a cool-season grass. Seeds from six plants were collected in the Caldenal, within the Espinal Phytogeographical Province during 1997, 2000, 2001, 2003, 2006, 2010, 2012, and 2013. Seed collection was always made at the end of the growing season (late spring, early summer: December) to make sure that seeds reached full maturity. Plant seeds were maintained in paper bags at laboratory temperature. Twenty seeds were sampled from each bag and immersed in distilled water during 24 h previous to their cutting. Seeds of this species have innate dormancy imposed by their glumes [19]. They were removed from the seeds, which were cut longitudinally under a stereoscopic microscope. Each half was exposed to the staining procedure with TTC and Evans Blue which has already been mentioned for bud tissues above.

Statistical analysis. Bud and seed percentages in the various viability categories were transformed to integral arcsin(x)dx prior to analysis, and all data were checked for normality. Two-way analysis of variance (ANOVA, p < 0.05) was used to compare treatment effects [20]. If ANOVA showed significant effects, Fisher test (LSD, p < 0.05) was used to determine differences between treatments. All mean comparisons were performed with the statistical package "INFO: stat" [21]. Untransformed data are presented in figures.