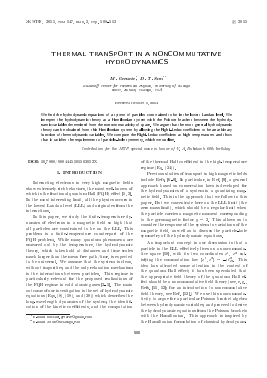 ﻿THERMAL TRANSPORT IN A NONCOMMUTATIVE

We find the hydrodynamic equations of a system of particles constrained to be in the lowest Landau level. We interpret the hydrodynamic theory as a Hamiltonian system with the Poisson brackets between the hydrodynamic variables determined from the noncommutativity of space. We argue that the most general hydrodynamic theory can be obtained from this Hamiltonian system by allowing the Righi-Leduc coefficient to be an arbitrary function of thermodynamic variables. We compute the Righi-Leduc coefficient at high temperatures and show that it satisfies the requirements of particle-hole symmetry, which we outline.

Contribution for the JETP special issue in honor of V. A. Rubakov's 60th birthday

Interacting electrons in very high magnetic fields show extremely rich behaviors, the most well-known of which is the fractional quantum Hall (FQH) effect [1,2]. In the most interesting limit, all the physics occurs in the lowest Landau level (LLL) and originates from the interactions.

In this paper, we study the finite-temperature dynamics of electrons in a magnetic field so high that all particles are constrained to be on the LLL. This problem is a finite-temperature counterpart of the FQH problem. While many quantum phenomena are smeared out by the temperature, the hydrodynamic theory, which takes hold at distances and time scales much larger than the mean free path/time, is expected to be universal. We assume that the system is clean, without impurities, and the only relaxation mechanism is the interactions between particles. This regime is particularly relevant for the proposed realizations of the FQH regime in cold atomic gases [3 5]. The main outcome of our investigation is the set of hydrodynamic equations (Eqs. (8), (18), and (30)) which describes the long-wavelength dynamics of the system, the identification of the kinetic coefficients, and the computation

of the thermal Hall coefficient in the high-temperature regime (Eq. (34)).

Previous studies of transport in high magnetic fields include Refs. [6 9]. In particular, in Ref. [9], a general approach based on conservation laws is developed for the hydrodynamics of a system in a quantizing magnetic field. This is the approach that we follow in this paper. But we concentrate here on the LLL limit (the zero mass limit), which should be a regular limit when the particle carries a magnetic moment corresponding to the gyromagnetic factor g = 2. This allows us to consider the response of the system to variations of the magnetic field, as well as to discuss the particle hole symmetry of the hydrodynamic equations.

An important concept in our discussion is that a particle in the LLL effectively lives on a noncommuta-tive space [10], with its two coordinates x1, x2 satisfying the commutation law [.i:1,!:2] = —U%. This idea has attracted some attention in the context of the quantum Hall effect; it has been speculated that the appropriate field theory of the quantum Hall effect should be a noncommutative field theory (see, e. g., Refs. [11, 12]; for an introduction to noncommutative field theory, see Ref. [13].) We use this noncommutativity to argue for a particular Poisson bracket algebra between hydrodynamic variables, and proceed to derive the hydrodynamic equations from the Poisson brackets with the Hamiltonian. This approach is inspired by the Hamiltonian formulation of classical hydrodynam-

ics [14]. The Hamiltonian equations that follow from the formalism form a self-consistent hydrodynamic theory, but we argue that they need a slight modification to become the most general set of equations consistent with conservation laws and the second law of thermodynamics. This modification is related to the Righi Leduc (thermal Hall) effect [15, 16].

We recall the basic thermodynamic functions of a system in an external magnetic field [9]. The grand potential is an extensive thermodynamic variable that depends on the temperature, chemical potential, and magnetic field: Q = —VP(T, fi, B). The partial derivatives of P are the entropy density, particle number density, and magnetization: dP = sdT + ndfi. + MdB. The hydrodynamic pressure is not P but its Legendre transform with respect to B: p = P — MB, and hence dp = sdT + ndfi. — BdM. The energy density is e = = Th + fin — P.

We consider a system of nonrelativistic particles of mass m and gyromagnetic factor g = 2 moving in a background magnetic field B, and are interested in the regime where all higher Landau levels can be neglected. We study the response of the system to arbitrary fluctuations of both electric and magnetic fields, assuming that B does not vanish at any place in space and time, and hence the separation between the lowest and the higher Landau levels is always maintained. The LLL limit corresponds to taking m —¥ 0 and all the physics should be finite in this limit for g = 2.

The Hamiltonian for our system is

We now extract the part divergent as m —¥ 0 from the conserved currents and the stress tensor as follows:

For the number current (5), this procedure of extracting the 1/m part was done in Rcf. [19]. The conservation laws are regular in the m —¥ 0 limit in terms of the newly defined quantities,

These equations can also be obtained within the Newton Cartan formalism [21]. Moreover, in the limit m —¥ 0, the first term in the left-hand side of Eq. (8b) can be dropped, and it becomes a force-balance condition. From now on, we drop the tildes in the finite currents. To close the equations, we need to express j1, e'1, and through the derivatives of the local temperature and chemical potential. To the first order in derivatives in the equations, we can limit ourselves to the leading-order contribution to the stress tensor: ll(/ = pôik.

where £>.; = di — iA, (we use units where h = c = 1 and absorb the electron charge e into the gauge potential A^). We can also think about our system as that of particles with zero magnetic moment (g = 0), subjected to an external field in which the scalar potential is tuned to deviate from B/2m by an amount that remains finite as m —¥ 0. The conservation laws are the conventional ones, with the replacement ,40 —¥ .40 + B/2m,

3. HAMILTONIAN MODEL OF A NONCOMMUTATIVE FLUID

We now need to understand the Possion brackets involving the entropy density. We recall that in ideal hydrodynamics, the entropy per particle s/n is conserved along fluid worldlinos. We can assume that each particle ,4 carries an entropy sa for all time,

In order to close the Poisson algebra, we should express c in terms of s and n. In the "mean field" approximation, we may expect c = s2/nD. We now assume the most general c compatible with the Jacobi identity, which can be shown to be

We note tliat botli the total particle number and tho total entropy are Casimirs of the Poisson algebra, and henee thoy are automatically consorvod. We find, for example, din = —dif, where the particle number current jl is

where a: cannot be determined from charge conservation alone. This can be done using the force balance equation (8b), in which we substitute 11;/, = pój/,,

which, by using dp = sdT + ndfi — BdM, completely determines jl, and the result corresponds to a: = M. The first term in the right-hand side of Eq. (18) corresponds to the "transport current," while the second part is the "magnetization current".

Computing the Poisson bracket of ,s with the Hamiltonian, we can find the conservation law for the entropy

For the energy density, we can use die = Tdis + )idi.n and derive the energy current from Eq. (8c):

We have also introduced the "energy magnetization" Me whose contribution to the energy current is divor-gonco-froo.

We note in passing that the Streda formula can be derived from our equation for the current. Expanding the current in terms of derivatives of thermodynamic variables, including the derivative of B,

where we have used Maxwell's relation. The naive Einstein relation a'/j = —aH does not hold due the nonvanishing magnetization current in thermal equilibrium. We note that in a zero-temperature incompressible phase, n/B is constant and = 0, consistent with the expectation that small spatial variations of //. should not have any physical effect in such a phase. In th