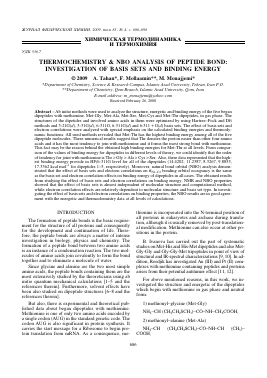 The formation of peptide bonds is the basic requirement for the structure of all proteins and consequently for the development and continuation of life. Therefore, the peptide bonds are always a matter of intense investigation in biology, physics and chemistry. The formation of a peptide bond between two amino acids is an instance of a condensation reaction. The two molecules of amino acids join covalently to form the bond together and to eliminate a molecule of water.

But also, there is experimental and theoretical published data about began dipeptides with methionine. Methionine is one of only two amino acids encoded by a single codon (AUG) in the standard genetic code. The codon AUG is also significant in protein synthesis. It carries the start message for a Ribosome to begin protein translation from mRNA. As a consequence, me-

thionine is incorporated into the N-terminal position of all proteins in eukaryotes and archaea during translation, although it is usually removed by post-translation-al modification. Methionine can also occur at other positions in the protein.

B. Ivanova has carried out the part of systematic studies on Met-His and His-Met dipeptides and also Met-Gly-Gly and Gly-Gly-Met tripeptides in point of view of structural and IR-spectral characterizations [9, 10]. In addition, Reedjik has investigated Au (III) and Pt (II) complexes with methionine containing peptides and proteins arises from their potential antitumor effect [11, 12].

For above mentioned reasons, in this work, we investigated the structure and energetic of the dipeptides which begin with methionine in gas phase and neutral form:

When methionine combines with other amino acids to form a dipeptide, donates a hydroxyl group and other amino acids remove a proton and the releasing water molecule. In this paper, we used Hartree-Fock and DFT methods with different basis sets to calculate the structure and energy of dipeptide molecules. The basic interest of the present study is to analyze the effect of basis sets and electron correlations in DFT level on the structure, binding energy and thermodynamic functions, NBO and NMR properties. In addition, we compared the energetic and thermochemistry results with NBO (natural bond orbital) data and the agreement between them. Unfortunately, because of limitation of computational resources, we could not study the effect of basis sets and electron correlations using of high level ab initio quantum mechanical methods.

Geometry optimizations were performed by using Hartree-Fock (HF) and Beck's three parameter hybrid with the Lee-Yang-Parr correlation functional, B3LYP[13, 14] ,methods with the 3-21G(d), 6-31G(d), 6-311G, 6-311G(d) and 6-311 + G(d) basis sets on Met-Gly,Met-Ala, Met-Ser, Met-Cys, Met-Thr, Gly, Ala, Cys, Ser, Thr, Met and water. Energy minimum molecular geometries were located by minimizing energy, with respect to all geometrical coordinates without imposing any constraints. The nature of the stationary points for compounds has been fixed by the imaginary frequencies. For minimum state structures, only real frequency values were accepted. The vibrational frequencies of optimized molecules were calculated in temperature of 298.150 K and pressure of 1.0 atmosphere by using same method and basis set for optimization. The binding energies for all of the five dipeptides were calculated at all of the above theoretical methods, with and without the ZPE. The thermody-namic functions (all corrected for the zero point energy), i.e. E0, enthalpy H (sum of electronic and thermal enthalpy), Gibbs free energy G (sum of electronic and thermal free energy) and entropy S, were calculated according to the following relations:

as defined in the output of the frequency calculation in GAUSSIAN manual. Finally, using the corresponding

In [15, 16] nuclear magnetic shielding calculations were carried out on optimized structures using same method and basis set for optimization and the values of symmetric shielding (Aa) and asymmetry shielding (n) were calculated by below formulas:

NBO analysis was then performed on optimized structures by using the same method and basis set for optimization by the NBO 3.1 program [17, 18]. The natural charges of N1, C2, O4 atoms, the bonding and antibonding orbital occupancies in the optimized structures of compounds 1-5, the stabilization energies associated with aN1-C2 -- a*2—O4 , aN1-C2 -- aN1—C3 ,

nC2-O4 —- n*2—O4 delocalizations and also aN1-C2 and aC2-O4 bonds deviation were calculated by using NBO analysis. In the NBO analysis, the electronic wave functions are interpreted, in terms of a set of occupied Lewis and a set of unoccupied non-Lewis localized orbitals. The delocalization effects (or donor-acceptor charge transfers) can be estimated from the presence of off-diagonal elements of the Fock matrix in the NBO basis. The NBO program searches for an optimal natural Lewis structure, which has the maximum occupancy of its occupied NBOs, and in general agrees with the pattern of bonds and lone pairs of the standard structural Lewis formula. Therefore, the new orbitals are more stable than pure Lewis orbitals, stabilizing the wave function and giving a set of molecular orbital equivalent to canonical molecular orbital. All calculations in present work were performed by using the GAUSSIN 98 program [19].

Hartree-Fock and Beck's three parameter hybrid with the Lee-Yang-Parr correlation functional, B3LYP, methods with the 3-21G(d), 6-31G(d), 6-311G, 6-311G(d) and 6-311 + G(d) basis sets were used for geometry optimizations of dipeptides 1-5 and involved amino acids in them. Binding energies for dipeptides were calculated as the difference between the sum of the equilibrium energies from the two individual amino acids in the initial state and that from the final state (dipeptide molecule + water).

Fig. 1. The structure of the peptide bond taken from considered dipeptides in present work.

culations, (see Table 1, Fig. 1 and 2). these numerical results suggest that Thr donates the proton easier than other four amino acids an