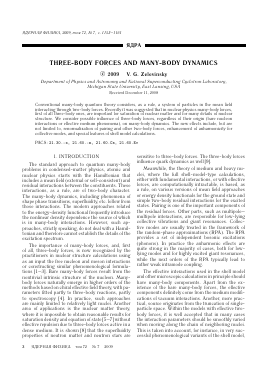 Conventional many-body quantum theory considers, as a rule, a system of particles in the mean field interacting through two-body forces. Recently it was suggested that in nuclear physics many-body forces, first of all three-body ones, are important for saturation of nuclear matter and for many details of nuclear structure. We consider possible influence of three-body forces, regardless of their origin (bare nucleon interactions or effective medium phenomena), on many-body dynamics. The new effects include, but are not limited to, renormalization of pairing and other two-body forces, enhancement of anharmonicity for collective modes, and special features of shell model calculations.

The standard approach to quantum many-body problems in condensed-matter physics, atomic and nuclear physics starts with the Hamiltonian that includes a mean field (external or self-consistent) and residual interactions between the constituents. These interactions, as a rule, are of two-body character. The many-body dynamics, including phenomena of shape phase transitions, superfluidity, etc. follow from those interactions. The modern approaches related to the energy-density functional frequently introduce the nonlinear density dependence the source of which is in many-body interactions. However, such approaches, strictly speaking, do not deal with a Hamiltonian and therefore cannot establish the details of the excitation spectrum.

The importance of many-body forces, and, first of all, three-body forces, is now recognized by the practitioners in nuclear structure calculations using as an input the free nucleon and meson interactions or constructing similar phenomenological formulations [1—3]. Bare many-body forces result from the nontrivial intrinsic structure of the nucleon. Many-body forces naturally emerge in higher orders of the methods based on chiral effective field theory, with parameters fitted partly to three-body reactions, partly to spectroscopy [4]. In practice, such approaches are mainly limited to relatively light nuclei. Another area of applications is the nuclear matter theory, where it is impossible to obtain reasonable results for saturation density and equation of state [5—7] without effective repulsion due to three-body forces active in a dense medium. It is shown [8] that the superfluidity properties of neutron matter and neutron stars are

Meanwhile, the theory of medium and heavy nuclei, where the full shell-model-type calculations, either with fundamental interactions, or with effective forces, are computationally intractable, is based, as a rule, on various versions of mean field approaches or energy density functionals for the ground state and simple two-body residual interactions for the excited states. Pairing is one of the important components of the residual forces. Other parts, such as multipole— multipole interactions, are responsible for low-lying collective vibrations and giant resonances. Collective modes are usually treated in the framework of the random-phase approximations (RPA). The RPA provides a set of independent bosonic excitations (phonons). In practice the anharmonic effects are quite strong in the majority of cases, both for low-lying modes and for highly excited giant resonances, while the next orders of the RPA typically lead to rather weak intramode coupling.

The effective interactions used in the shell model and other microscopic calculations in principle should have many-body components. Apart from the existence of the bare many-body forces, the effective components definitely come from the medium modifications of vacuum interactions. Another, more practical, source originates from the truncation of single-particle space. Within the models with effective two-body forces, it is well accepted that in many cases the interaction parameters should be smoothly varied when moving along the chain of neighboring nuclei. This is taken into account, for instance, in very successful phenomenological variants of the shell model,

such as the sd model with the USD interaction [10]. A smooth interpolation of two-body interactions can be interpreted as a dependence on nucleon density or single-particle occupation numbers coming from three-body interactions through the averaging over the variables of the third particle [11]. Explicit introduction of three-body forces into the density matrix expansion was recently reviewed in [12].

Looking at the physics of medium and heavy nuclei, in particular that of collective motion, it is hard to understand if such a dependence comes from bare many-body forces or from effective residual interactions in the mean field or shell model approaches. But it seems expedient to try to point out some observable effects that can be ascribed to the presence of three-body residual forces, independently of their origin.

In this article, few possible qualitative manifestations of three-body forces in nuclear many-body dynamics are pointed out. We start with the renor-malization of pairing and proceed to anharmonic effects for different collective modes (quadrupole, octupole, and dipole) and their interactions. The cubic anharmonicity is usually suppressed by strong cancelations in the RPA approach, but it can be enhanced by three-body forces which remove such cancelations. In particular, the effects important for observable correlations between various collective modes and for the search for the enhancement of parity and time-reversal violation are indicated. For highly excited resonances, this is the mechanism providing the essential part of the spreading width through the coupling of giant modes with shape fluctuations. We also briefly touch the role of three-body effective forces in the shell model.

The simplest, and maybe one of the most important, effects of three-body forces comes out when the third particle renormalizes the two-body interaction through the average density dependence [11]. We illustrate this mechanism for the pairing interaction.

In what follows, we consider, for simplicity, the spherical case; the subscript 1 refers to the set (nljmr)i of single-particle quantum numbers. Single-particle energies e1 do not depend on m (the chemical potential is included in their definition). The most general three-fermion interaction can be written as

where the triplets of fermion operators are used, T123 = a1a2a3. With requirements of rotational invariance, we have many choices for angular momentum (and isospin) quantum numbers of the triplets.

The most noticeable effects are expected from collective correlations. Therefore we can consider the combinations which can influence the strongest known collective modes.

We start with the renormalization of pairing correlations. This is a clear example of the monopole corrections linear in the occupancies of the orbitals. In this case the appropriate triplets can be written as

Here we introduced the monopole pairing operators for identical particles,

and the subscript 1 does not contain anymore the angular momentum projection m that is indicated explicitly; we use the phase conventions for time-conjugate operators \jrn) = (—1)j-m\j — m), and for the double time reversal \jrn) = —\jm). In this case the residual forces (1) are reduced to

where we use the occupation number operators n3 =

In the presence of the conventional pairing,

we can solve the total problem with the mean field energies e1 and pairing HP = Hp2 + H(3) in the BCS approximation. Within the same accuracy, the coupled equations of motion for the single-particle

and the energy gap is expressed as

All expectation values are calculated exactly as in the BCS. Assuming the real occupancy amplitudes u1 and v1, we find

where Q is the number of degenerate states with quantum numbers 1, in the spherical case Q1 = 2j1 + + 1. The main equation for A' is given by

while for renormalized single-particle energies e' we obtain

The equations are simplified in the approximation of constant pairing, G12 = G01 02, where the 0 factors restrict the interaction space by a layer around the Fermi surface as this was done in the first serious study of nuclear pairing by Belyaev [13]. In the same spirit we assume g12;3 = g301©2, although we could also use a more general expression g13g23. Now the solution of (10) has a form A1 = 01 A',wherethegap A' is a constant inside the layer that satisfies

and the self-consistent single-particle energy that enters E'1 is

This is the closed set of equations for the energy gap, new single-particle energies, and occupation numbers.

If the new interaction has approximately constant matrix elements, g1 w 01g, the result is a renormal-ization