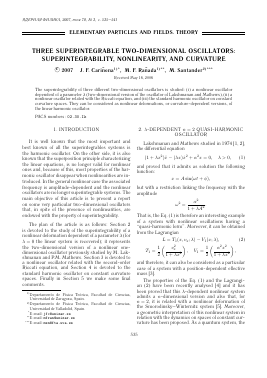 It is well known that the most important and best known of all the superintegrables systems is the harmonic oscillator. On the other side, it is also known that the superposition principle characterizing the linear equations, is no longer valid for nonlinear ones and, because of this, most properties of the harmonic oscillator disappear when nonlinearities are introduced. In the general nonlinear case the associated frequency is amplitude-dependent and the nonlinear oscillators are no longer superintegrable systems. The main objective of this article is to present a report on some very particular two-dimensional oscillators that, in spite of the presence of nonlinearities, are endowed with the property of superintegrability.

Lakshmanan and Mathews studied in 1974 [1,2], the differential equation

and proved that it admits as solution the following function:

but with a restriction linking the frequency with the amplitude

That is, the Eq. (1) is therefore an interesting example of a system with nonlinear oscillations having a "quasi-harmonic form". Moreover, it can be obtained from the Lagrangian

and therefore, it can also be considered as a particular case of a system with a position-dependent effective mass [3].

The properties of the Eq. (1) and the Lagrangi-an (2) have been recently analysed [4] and it has been proved that this A-dependent nonlinear system admits a n-dimensional version and also that, for n = 2, it is related with a nonlinear deformation of the Smorodinsky—Winternitz system [5]. Moreover, a geometric interpretation of this nonlinear system in relation with the dynamics on spaces of constant curvature has been proposed. As a quantum system, the

Schrôdinger equation involving the potential x2/(1 + + gx2) was considered in [6—11], and it has been recently proved [12] that the quantum version of (2) can be studied by using a factorization method and even that it is endowed with the property of shape invariance.

In this section we will analyze the superintegrabi-lity of the A-dependent system described by the two-dimensional version of the Lagrangian (2).

so that the following X-dependent Lagrangian:

represents the more direct extension to n = 2 of the Lagrangian (2) (the same kinetic term but with a X-independent potential is studied in [13, 14]). The two-dimensional dynamics is given by the following X-dependent vector field:

where the two functions Fx and Fy are given by:

in such a way that for X = 0 we recover the dynamics of the standard linear harmonic oscillator:

The Legendre transformation is given by

so that the form of the angular momentum is preserved by the Legendre map, in the sense that we have xpy — ypx = xvy — yvx (notice that this fact is consequence of the introduction of the term J in the definition of Ty(X)), and the general expression for a X-dependent Hamiltonian becomes

and, hence, the associated Hamilton—Jacobi equation takes the form

This equation is not separable in (x, y) coordinates because of the X-dependent term; nevertheless it admits separability in at least three different systems. (i) In terms of the new coordinates

Then V is integrable with two quadratic integrals of motion

Then V is integrable with two quadratic integrals of motion

(iii) In polar coordinates (r,4>) a potential V that takes the form:

is separable and integrable with the following two quadratic integrals of motion:

The potential V2(A) can alternatively be written as follows:

Therefore, it is superseparable [15—21] since it is separable in three different systems of coordinates (zx ,y), (x, zy), and (r, 0). Because of this the Hamiltonian

So the total Hamiltonian can be written as a sum, not of two, but of three integrals of motion. The third one, which represents the contribution of the angular momentum J to H, has the parameter A as coefficient; so it vanishes in the linear limit A ^ 0.

3. A NONLINEAR OSCILLATOR RELATED WITH THE RICCATI EQUATION

Leach et al. studied in [22, 23] the equation q + + qq + /3q3 = 0 and point out that for /3 = 1/9 it is completely integrable and possesses the maximum number of symmetries. Recently Chandrasekar et al. [24] have analyzed, making use of the so-called Prelle—Singer method, a generalization of this equation and have interpreted it as an "unusual Lienard-type oscillator with properties of a linear harmonic oscillator". The important point is that, in these two cases, the corresponding equations are second-order Riccati equations [25].

In this section we will analyze the superintegrabi-lity of a two-dimensional nonlinear Riccati oscillator using the Lagrangian formalism as an approach.

In this section we shall study a nonlinear system related with the following equation:

with the three coefficients a3, b0, and b1 satisfying the following restrictions

where the three partial functions H1, H2, and H3 are given by

each one of these three terms has a vanishing Poisson bracket with H for any value of the parameter A:

Secondly, because it can be obtained from a Lagrangian function. This can be proved as follows: the one-degree-of-freedom Lagrangian

and the two functions bo and b1 satisfying the appropriate restrictions.