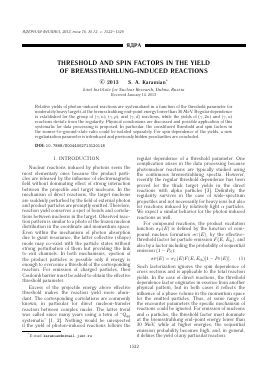 THRESHOLD AND SPIN FACTORS IN THE YIELD OF BREMSSTRAHLUNG-INDUCED REACTIONS

Relative yields of photon-induced reactions are systematized in a function of the threshold parameter for moderately heavy targets at the bremsstrahlung end-point energy lower than 30 MeV. Regular dependence is established for the group of (7, n), (y,p), and (Y,d) reactions, while the yields of (7,2n) and (7, a) reactions deviate from the regularity. Physical conclusions are discussed and possible application of this systematic for data processing is proposed. In particular, the constituent threshold and spin factors in the isomer-to-ground-state ratio could be isolated separately. For spin dependence of the yields, a new regularization parameter is introduced and previously hidden peculiarities are concluded.

Nuclear reactions induced by photons seem the most elementary ones because the product particles are released by the influence of electromagnetic field without dominating effect of strong interaction between the projectile and target nucleons. In the mechanism of direct reactions, the target nucleons are suddenly perturbed by the field of external photon and product particles are promptly emitted. Therefore, reaction yield conserves a spot of bonds and correlations between nucleons in the target. Observed reaction pattern is similar to a photo of the frozen nucleon distribution in the coordinate and momentum space. Even within the mechanism of photon absorption due to giant resonance, the latter collective (shape) mode may co-exist with the particle states without strong perturbation of them but providing the link to exit channels. In both mechanisms, ejection of the product particles is possible only if energy is enough to overcome a threshold of the corresponding reaction. For emission of charged particles, their Coulomb barrier must be added to obtain the effective threshold parameter.

Excess of the projectile energy above effective threshold makes the reaction yield more abundant. The corresponding correlations are commonly known, in particular for direct nucleon-transfer reaction between complex nuclei. The latter trend was called since many years using a term of "Qgg systematic" [1, 2]. Nothing would be unexpected if the yield of photon-induced reactions follows the

regular dependence of a threshold parameter. One complication arises in the data processing because photonuclear reactions are typically studied using the continuous bremsstrahlung spectra. However, recently the regular threshold dependence has been proved for the thick target yields in the direct reactions with alpha particles [3]. Definitely, the regularity survives in the case of wide-spectrum projectiles and not necessarily for heavy ions but also for reactions induced by relatively light a particles. We expect a similar behavior for the photon induced reactions as well.

For compound reactions, the product excitation function aP(E) is defined by the function of compound nucleus formation aC (E), by the effective-threshold factor for particle emission F(E, Eth), and also by a factor including the probability of sequential emission (1 — PS):

Such factorization ignores the spin dependence of cross sections and is applicable to the total reaction yields. In the case of direct reactions, the threshold dependence factor originates in essence from another physical pattern, but in both cases it reflects the influence of a phase volume in the momentum space for the emitted particles. Thus, at some range of the encounter parameters the specific mechanism of reactions could be ignored. For emission of nucleons and a particles, the threshold factor must dominate at the bremsstrahlung end-point energy lower than 30 MeV, while at higher energies, the sequential emission probability becomes high, and, in general, it defines the yield of any particular reaction.

In the present work, we took for the analysis the literature data [4—12] obtained at the end-point energy Ee ^ 30 MeV. This series of works was performed over recent five years, except the paper [4] published 15 years ago. But the latter article involves the original results taken with high-spin target and product nuclei and remains of interest for the modern analysis. Selected data set of [4—12] must be enough to establish regular trends and manifestations in the reaction yields. However, the measured data are often incomplete. The activation method is widely used, and in some cases, a partial yield of the isomer or of the ground state could only be measured because of the individual decay properties of the products. The partial yield is not enough because we need to operate with the full yield of the reaction. Fortunately, a survey of the isomer-to-ground-state ratios (m/g) was developed earlier based on the analysis of the data taken since 30—40 years ago. The collection of those results was reviewed in the papers [13, 14]. The systematic function of the m/g ratio must be helpful to evaluate the full yield Ytot of the reaction when only m or g state was detected due to the radioactive properties. The total yield is expressed through the partial yields and the m/g ratio as follows:

Below, we start from the isolation of the threshold dependence factors from experimental results of [4—7]. Total yields are available there and if not, the recalculation through Eq. (2) could be applied. The traditional approach to the system of m/g ratios as a function of spin difference allows estimations for realistic m/g ratio when it is not measured. The threshold factor makes influence on the m/g ratio, as well, but that could be noticeable only when the excitation energy of the isomer is high, exceeding 0.5 MeV. In such cases, the second iteration is possible correcting the observed m/g value to the difference of thresholds for g and m product states. This iteration was performed for the group of data taken from [4—7] and the results are shown below. At the same time, in some publications of recent years [912], only isomer-to-ground-state ratios are reduced, while yields of different reactions are not compared even in relative units. Therefore, they could not be used for construction of the threshold dependence, neither for evaluation of the corrected m/g values. In the discussed below dependence of m/g ratio on the spin parameter, the data of [9—12] are taken as it is. The threshold factor in m/g ratio is relatively low at moderate excitation of isomers, and the systematic is not strongly distorted due to that. However, yield of such isomers as 178m2Hf excited to 2.45 MeV is influenced by a higher threshold and this has been taken into account.

Reaction thresholds could be calculated using known masses (binding energies) for the reaction participants: projectile, target, product, and ejec-tile. Nuclide masses are tabulated and are available in literature, for instance in Handbook [15]. For selected reactions, we have calculated numerically the threshold values Eth. In the case of charged ejectiles, the Coulomb barrier Be must be added to receive real start point for the successful emission, therefore Be values were calculated using the well-known and accepted Bass barrier equation [16]. The systematization parameter for threshold dependence is taken in a form of (Ee — Eth — Be), where Ee is the bremsstrahlung end-point energy. The parameter defines an excess of the maximum photon energy above the reaction effective threshold.

In Fig. 1, relative yields of the reactions studied in works [4-8] are plotted as a function of (Ee — — Eth — Be). Each consequence of points is taken for definite target and Ee value and looks as a separate function. That is because only relative yields are given in publications and they are normalized to the most abundant yield of the (j, n) reaction. These separate functions, in principle, could be merged into a unified dependence to get a common, general function of the yield versus threshold parameter. However, the absolute yields are not given in [4-8], and only

partial systematization of Fig. 1 is possible for each individual group of the yield values. In some cases, the inclusive yield of only m or g state is given, and we re-calculate them to the full reaction yield, as was described above with Eq. (2). The spin dependence regularities are commented below in the following section.

The regular behavior of the yield as a function of the threshold parameter is nevertheless clearly manifested in Fig. 1. Each separate curve may be used as a threshold factor F(E, Eth) for partial collection of yields with the definite target and endpoint energy. It would be interesting to stress that the points corresponding both to the (y, n) and (y,p) reactions demonstrate a regular increasing versus the (Ee — Eth — BC) parameter in Fig. 1. The common variation may confirm a similar mechanism of the neutron and proton emission. Most probably, they are emitted through the evaporation mechanism from the compound nucleus past photon absorption or, with lower probability, are released directly by the electromagnetic field of a photon. In both cases, the regular threshold dependence of the single nucleon-emission yield could be expected