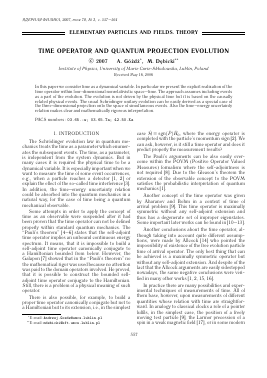 In this paper we consider time as a dynamical variable. In particular we present the explicit realization of the time operator within four-dimensional nonrelativistic space—time. The approach assumes including events as a part of the evolution. The evolution is not driven by the physical time but it is based on the causally related physical events. The usual Schrodinger unitary evolution can be easily derived as a special case of the three-dimensional projection onto the space of simultaneous events. Also the time—energy uncertainty relation makes clear and mathematically rigorous interpretation.

The Schrodinger evolution law in quantum mechanics treats the time as a parameter which enumerates the subsequent events. The time, as a parameter, is independent from the system dynamics. But in many cases it is required the physical time to be a dynamical variable. It is especially important when we want to measure the time of some event occurrences, e.g., when a particle reaches a detector [1, 2] or explain the effect of the so-called time interference [3]. In addition, the time—energy uncertainty relation could be absorbed into the quantum mechanics in a natural way, for the case of time being a quantum mechanical observable.

There is also possible, for example, to build a proper time operator canonically conjugate but not to a Hamiltonian but to its extension, i.e., in the simplest

case H = sgn(P)H0, where the energy operator is completed with the particle's momentum sign [2]. We can ask, however, is it still a time operator and does it predict properly the measurement results?

The Pauli's arguments can be also easily overcome within the POVM (Positive Operator Valued Measures) formalism where the self-adjointness is not required [8]. Due to the Gleason's theorem the extension of the observable concept to the POVM satisfies the probabilistic interpretation of quantum mechanics [1].

Another concept of the time operator was given by Aharanov and Bohm in a context of time of arrival problem [9]. This time operator is maximally symmetric without any self-adjoint extension and thus has a degenerate set of improper eigenstates. Some important later works can be found in [10—13].

Another conclusions about the time operator, although taking into account quite different assumptions, were made by Allcock [14] who pointed the impossibility of existence of the free evolution particle time of arrival operator. The only best thing that can be achieved is a maximally symmetric operator but without any self-adjoint extension. And despite of the fact that the Allcock arguments are easily sidestepped nowadays, the same negative conclusions were verified in many other works [1,2, 15, 16].

In practice there are many possibilities and experimental techniques of measurements of time. All of them base, however, upon measurements of different quantities whose relation with time are straightforward. In analogy to classical clocks a role of a pointer fulfils, in the simplest case, the position of a freely moving test particle [9], the Larmor precession of a spin in a weak magnetic field [17], or in some modern

experiments with the ultrafast attosecond lasers and the measurement of the nonlinear optical effects [3].

The essential consequence of the Schrodinger's evolution law is that a particle can be observed in the same position x at different times t1,t2, . ..,tn, but there is impossible to localize it in two different positions x1 and x2 simultaneously at the time t because the time is not a dynamical variable. Thus there is a problem in defining a mean time of the particle's existence in a given space region in a traditional way (dwell time) e.g., given by:

is not well defined within the Schrodinger's type of the quantum mechanics.

In this paper we consider the physical time as a dynamical variable. In particular we will present the explicit realization of the time operator within four-dimensional nonrelativistic space—time. The approach assumes including events as a part of the evolution formalism, and in this point it is similar to the "consistent histories" program [18]. The main difference is in considering time variable and consequences of this extension of the formalism.

The evolution process is regarded here as a stochastic process of subsequent events enumerated, not by the intermediate times, but by the external parameter which orders the quantum events. This has been already used previously as the model for the evolution of decaying system [19].

We treat time and space on equal footing as has been often emphasized recently [20]. The time operator is given in a form of resolution of unity on the space of simultaneous events.

2. TIME AS A DYNAMICAL VARIABLE

The main assumption is to include events in the evolution process. The evolution is not driven by the physical time but it is based on the causally related physical quantum events. The space is four-dimensional, so the time is treated on the equal

footing with the position variables. Taking above into consideration we use the following notion all over the paper:

t is the dynamical variable, like other position variables in the coordinate space;

t is a real, growing parameter (not the physical time) which enumerates the subsequent events.

The quantum evolution process should not be understood in terms of the time variable but as the subsequent "screen-shoots" of events in the space— time. Of course, there is a correspondence to the usual meaning of the evolution which corresponds to the projections onto subspaces of simultaneous events. This aspect will be emphasized once more in the next section.

Our consideration are based, as it was mentioned above, on the concept of the projection evolution approach. The more extensive discussion on this idea is not the purpose of this paper but we quote the main assumptions of this approach [21]:

1. The states of a quantum system are described by the density operators and the term "quantum evolution" we understand as a sequence of states changes ordered by the evolution parameter t which parameterizes the subsequent "quantum causally" related events. Shortly, the quantum evolution is regarded as a stochastic process enumerated, not by the intermediate times, but by the external parameter t .

2. For every quantum system there exists a set of the evolution operators (projections) E(t; v) which for each fixed t gives the resolution of unity in respect to the sets of quantum numbers v:

3. There exists a mechanism (chooser) which chooses randomly the next state of the quantum system in a way dependent on the physical structure of this quantum system. A new state is chosen randomly from the following states:

where v' runs over all allowed by the projection evolution operator sets of quantum numbers. The density operator p(t — dT; v) denotes the state for

the "previous" value of the evolution parameter and labelled by the set of the quantum numbers v.

4. The probability distribution for the chooser depends on the previous state of the quantum system by the known relation:

This is, in principle, the conditional probability because the Eq. (5) describes a probability of choosing next state, under the assumption that the system is already in the given state p(r — dr; v).

5. The evolutions of a larger quantum system and its subsystems have to be consistent (to not lead to some paradoxes). At this moment this condition is less interesting for us because we will not use it in this paper. Its formulation can be found in [21].

Assuming now a nonrelativistic four-dimensional space—time, where x = (x0 = t, x) e R4, using the specified reference frame, there is a possibility to build a well—defined "time operator" MT(t) projecting onto the subspace of simultaneous events. For simplicity we consider here the single-particle state space K.