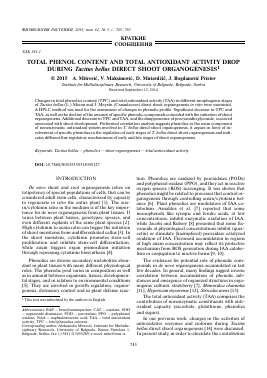 De novo shoot and root organogenesis relies on totipotency of special populations of cells, that can be considered adult stem cells, characterized by capacity to regenerate in vitro the entire plant [1]. The aux-in/cytokinin ratio in the medium is of the key importance for de novo organogenesis from plant tissues. It varies between plant tissues, genotypes, species, and even different explants of the same plant species [2]. High cytokinin to auxin ratio can trigger the initiation of shoot meristems from undifferentiated callus [3]. In the shoot meristem, cytokinin promotes stem-cell proliferation and inhibits stem-cell differentiation, while auxin triggers organ primordium initiation through repressing cytokinin biosynthesis [4].

Phenolics are diverse secondary metabolites abundant in plant tissues with many different physiological roles. The phenolic pool varies in composition as well as in amount between organisms, tissues, developmental stages, and in relation to environmental conditions [5]. They are involved in growth regulation, organogenesis, dormancy control and in plant defense reac-

tion. Phenolics are oxidized by peroxidases (PODs) and polyphenol oxidase (PPO), and they act in reactive oxygen species (ROS) scavenging. It was shown that phenolics might be related to processes that control organogenesis through controlling auxin/cytokinin balance [6]. Plant phenolics are modulators of IAA ca-tabolism. Arnaldos et al. [7] reported that some monophenols like synapic and ferulic acids, at low concentrations, inhibit enzymatic oxidation of IAA, while Jacobs and Rubery [8] presented that some fla-vonoids at physiological concentrations inhibit (quer-cetin) or stimulate (kaempferol) peroxidase catalyzed oxidation of IAA. Flavonoid accumulation in regions of high auxin concentration may reflect its protective mechanism from ROS generation during IAA catabo-lism or conjugation to inactive forms [9, 10].

In our previous work, changes in the activities of antioxidative enzymes and isoforms during Tacitus bellus direct shoot organogenesis [14] were discussed. In present study, in order to elucidate the contribution

of phenolic substances in T. bellus shoot organogenesis, changes in TPC and TAA were examined and correlated with previously presented [14] changes in the activities of enzymes involved in phenolic metabolism (peroxidases and polyphenol oxidases). Furthermore, assessment of changes in phenolic profile during T. bellus organogenesis has been made.

Plant material. The experiments were carried out on a small frost sensitive succulent from Mexico and widely cultivated horticultural subject, Tacitus bellus Moran and J. Meyran, syn. Graptopetalum bellum, Crassulace-ae. Direct shoot organogenesis was obtained on MS [15] medium supplemented with sucrose (30 g/L), ben-zylaminopurine (BAP, 0.1 mg/L) and naphtaleneacetic acid (NAA, 0.1 mg/L) and agar (0.7%) during 60 days [14]. Primary explants were lower rosette leaves from in vitro multiplied and on hormone free medium rooted plants. Temperature in growth chambers was 25 ± 2°C. Four samples (5 explants per sample) were collected at 0, 10, 20, 40, and 60 days of culturing, frozen, powdered in the liquid nitrogen in a mortar, and used for analysis. The experiment was repeated twice.

ABTS-test. The total antioxidant activity was measured using ABTS/HRP end-point method, according to Arnao et al. [16]. The reaction mixture contained 2 mM ABTS, 15 |M hydrogen peroxide, 0.25 |M HRP and 20 |L of 80% methanol extract of the powdered samples in 50 mM phosphate buffer, pH 7.5, in a total volume 2 mL. The assay temperature was 25°C. The reaction was monitored at 730 nm using a Shimadzu UV-160 spectrophotometer until a stable absorbance, due to ABTS radical formation, was obtained. Afterwards, different concentrations of ascorbic acid (0.1—0.8 mM) were added for a standard curve set-up. Adding of methanolic plant extracts in reaction mixture resulted in absorbance decreasing as a consequence of ABTS radical depletion. Additional sample dilution was needed for fitting the linear range of the standard curve. Absorbance alterations were read from standard curve and the TAA was expressed as micromoles of ascorbic acid equivalents (standard) per gram of fresh and dry weights.

The total phenolic content of the samples was determined according to the Folin—Ciocalteu's spectrophotometry (2501 PC, "Shimadzu", Japan) procedure using gallic acid as a standard for the calibration curve [17]. Powdered samples were mixed with 0.25 N Folin— Ciocalteu reagents, then after 3 min 0.2 M sodium carbonate solution was added and the mixture was incubated for 60 min at 25°C temperature. Gallic acid was used for constructing the standard curve (0.1—2.0 mM). Additional sample dilution was needed for fitting the linear range of the standard curve. Results were read at 724 nm and expressed as micromoles of gallic acid equivalent per gram of fresh and dry weights.

Phenolic compounds were extracted in the medium containing methanol : water : hydrochloric acid as 70 : 30 : 5. The homogenates were centrifuged at 10000 g for 20 min and supernatants were filtered through 0.22 ^m syringe filter prior to HPLC analysis.