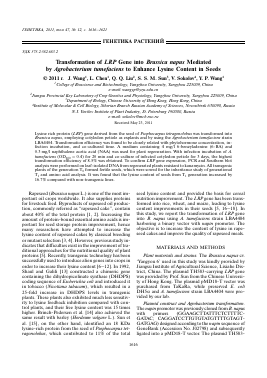 Lysine rich protein (LRP) gene derived from the seed of Psophocarpus tetragonolobus was transformed into Brassica napus, employing cotyledon petiole as explants and by using the Agrobacterium tumefaciens strain LBA4404. Transformation efficiency was found to be closely related with phytohormone concentration, infection incubation, and co-cultured time. A medium containing 4 mg/l 6-benzyladenine (6-BA) and 0.3 mg/l naphthalene acetic acid (NAA) was used for plant regeneration. With infection incubation of A. tumefaciens (OD600 = 0.4) for 20 min and co-culture of infected cotyledon petiole for 3 days, the highest transformation efficiency of 8.5% was obtained. To confirm LRP gene expression, PCR and Southern blot analysis were performed on leaf-isolated DNA from regenerated plants resistant to kanamycin. All transgenic plants of the generation T0 formed fertile seeds, which were sowed for the inheritance study of generational Ti and amino acid analysis. It was found that the lysine content of seeds from Ti generation increased by 16.7% compared with non-transgenic lines.

Rapeseed (Brassica napus L.) is one of the most important oil crops worldwide. It also supplies proteins for livestock feed. Byproducts of rapeseed oil production, commonly referred as "rapeseed cake", contain about 40% of the total protein [1, 2]. Increasing the amount of protein-bound essential amino acids is important for seed storage protein improvement, hence many researchers have attempted to increase the lysine content of rapeseed cakes by classical breeding or mutant selection [3, 4]. However, previous study indicates that difficulties exist in the improvement of traditional approaches for the nutritional quality of plant proteins [5]. Recently, transgenic technology has been successfully used to introduce alien genes into crops in order to increase their lysine content [6—12]. In 1992, Shaul and Galili [13] constructed a chimeric gene containing the dihydropicolinate synthase (DHDPS) coding sequence of Escherichia coli and introduced it in tobacco (Nicotiana tabacum), which resulted in a 25-fold increase in DHDPS levels in transgenic plants. These plants also exhibited much less sensitivity to lysine feedback inhibition compared with control plants, and their free lysine content was 15 times higher. Brinch-Pedersen et al. [14] also achieved the same result with barley (Hordeum vulgare L.). Sun et al. [15], on the other hand, identified an 18 KDa lysine-rich protein from the seed of Psophocarpus tetragonolobus, which contributed to 11% of the total

seed lysine content and provided the basis for cereal nutrition improvement. The LRP gene has been transformed into rice, wheat, and maize, leading to lysine content improvements in their seeds [5, 16—18]. In this study, we report the transformation of LRP gene into B. napus using A. tumefaciens strain LBA4404 harboring a binary vector with napin promoter. The objective is to increase the content of lysine in rape-seed cakes and improve the quality of rapeseed meals.

Plant materials and strains. The Brassica napus cv. 'Yangyou 6' used in this study was kindly provided by Jiangsu Institute ofAgricultural Science, Lixiahe District, China. The plasmid TH583-carrying LRP gene was provided by Prof. Sun from the Chinese University of Hong Kong. The plasmid pMD18-T vector was purchased from TaKaRa, while preserved E. coli DH5a and A. tumefaciens strain LBA4404 were provided by our lab.

Plasmid construct and Agrobacterium transformation. The napin promoter was previously cloned from B. napus with primers (GGAAGCTTATTTCTCTTTTC-GATAC; CAGGATCCTTGTGTATGTTTTGTAGT-GATGAG) designed according to the napin sequence of GeneBank (Accession No. J02798) and subsequently ligated into a pMD18-T vector. The plasmid TH583-

carrying LRP was digested with BamHI and SacI, and the LRP gene insert was ligated into a pBI121 treated with the same enzymes, resulting in the intermediate vector, pBI121-LRP, which was then digested with restriction enzymes BamHI and HindIII to remove the 35S promoter. The expression vector pBI121-napin-LRP-Kan was constructed by adding the napin promoter obtained from napin-pMD18-T vector treated with BamHI and HindIII. This construct was introduced into a disarmed octopine type A. tumefaciens strain LBA4404 for further genetic transformation.

Cotyledon petiole transformation and plant regeneration. Seeds of B. napus were surface-sterilized in 70% ethanol for 1 min and 3% (v/v) commercial bleach for 15 min, rinsed in sterile distilled water three times, and allowed to germinate in the dark on 1/2 MS medium for one week. Cotyledon petioles, which were detached from five-day old seedling at 25 ± 1°C and a 16/8 h (light/dark) photoperiod with a light intensity of 1400 lx m-2 s-1, were prepared for infection with an A. tumefaciens (OD600 = 0.3-0.5) suspension prepared according to Wang et al. [19]. After 2-4 days of co-cultivation in the dark, the explants were placed for a month in a differentiation medium containing 500 mg/l cefotaxime (Cef), 20 mg/l kanamycin (Kan), and a different phytohormone ratio of 6-BA/NAA. The regenerated putative transgenic shoots were then separated and transferred into a root inducement medium. Finally, the rooted plantlets were transplanted into dried water milfoil and grown in a greenhouse at 25°C. The optimal media used for cotyledon petiole formation, transformation, and plant regeneration are listed in Table 1.

Transgenic plants of the generation T0 were verified by Southern blot analysis. 2.5 ^g DNA were digested overnight with BamHI, separated on agarose gel, and transferred into a Nytran N+ membrane (Roche Diagnostics GmbH, Mannheim, Germany) by the alkaline transfer method. The probe (490 bp) specific to LRP was amplified from plasmid pBI121 with the previously described primers and labeled with a PCR DIG labeling kit (Roche, Mannheim, Germany). Afterwards, the membrane was hybridized to the labeled LRP probe at 40°C overnight, and the chemilumines-cent signals were detected using Lumi-film (Roche) before developing.

Inheritance study of the generation T1 and amino acid content analysis. Transgenic plants were self-pollinated in the greenhouse. The seeds obtained were germinated in 1/2 MS medium without phytohormones. To test the Kan resistant phenotype, the plantlets were transferred into the same medium containing kan (20 mg/l). Genomic DNA of the T1 generation was extracted for PCR assays of the LRP gene using the two primers described previously; this produced the expected 490 bp fragment. The T1 transgenic seedlings were then transplanted and their seeds harvested for amino acid content measurement. Amino acid measurement was carried out according to the standard method of GB/T18246-2000 [21]. Each sample was done in triplicate.

Establishment of an efficient Agrobacterium-mediat-ed transformation system of B. napus. In this study, cotyledon petioles of five-day old seedlings were used as explants for transformation experiments. In order to optimize the conditions for B. napus transformation, several factors influencing the transformation were examined, such as the phytohormone concentration in the differentiation medium, and the duration of trans-

Table 2. The effect of 6-BA/NAA on the regeneration of cotyledon petiole

Table 3. The effect of infection duration on transformation frequency