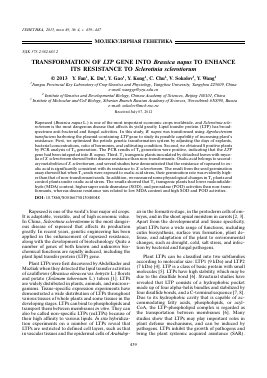 Rapeseed (Brassica napus L.) is one of the most important economic crops worldwide, and Sclerotinia sclerotiorum is the most dangerous disease that affects its yield greatly. Lipid transfer protein (LTP) has broad-spectrum anti-bacterial and fungal activities. In this study, B. napus was transformed using Agrobacterium tumefaciens harboring the plasmid-containing LTP gene to study its possible capability of increasing plant's resistance. First, we optimized the petiole genetic transformation system by adjusting the days of explants, bacterial concentrations, ratio of hormones, and cultivating condition. Second, we obtained 8 positive plants by PCR analysis of T0 generation. The PCR results of Ti generation were positive, indicating that the LTP gene had been integrated into B. napus. Third, T1 transgenic plants inoculated by detached leaves with myce-lia of S. sclerotiorum showed better disease resistance than non-transformants. Oxalic acid belongs to secondary metabolites of S. sclerotiorum, and several studies have demonstrated that the resistance of rapeseed to oxalic acid is significantly consistent with its resistance to S. sclerotiorum. The result from the seed germination assay showed that when Ti seeds were exposed to oxalic acid stress, their germination rate was evidently higher than that of non-transformant seeds. In addition, we measured some physiological changes in Ti plants and control plants under oxalic acid stress. The results showed that T1 transgenic plants had lower malondialde-hyde (MDA) content, higher super oxide dismutase (SOD), and peroxidase (POD) activities than non-trans-formants, whereas disease resistance was related to low MDA content and high SOD and POD activities.

Rapeseed is one of the world's four major oil crops. It is adaptable, versatile, and of high economic value. In China, Sclerotinia sclerotiorum is the most dangerous disease of rapeseed that affects its production greatly. In recent years, genetic engineering has been applied in the enhancement of rapeseed resistance, along with the development of biotechnology. Quite a number of genes of both known and unknown biochemical functions are rapidly induced, including the plant lipid transfer protein (LTP) gene.

Plant LTPs were first discovered by Abdelkader and Mazliak when they detected the lipid transfer activities of cauliflower (Brassica oleracea var. botrytis L.) florets and potato (Solanum tuberosum L.) tubers [1]. LTPs are widely distributed in plants, animals, and microorganisms. Tissue-specific expression experiments have demonstrated a wide distribution of LTPs throughout various tissues of whole plants and some tissues in the developing stages. LTPs can bind to phospholipids and transport them between membranes in vitro. They can also be called non-specific LTPs (nsLTPs) because of their high affinity to various lipids. In situ hybridization experiments on a number of LTPs reveal that LTPs are restricted to defined cell layers, such as that in vascular tissues and the epidermal cells of Arabidop-

sis in the formative stage, in the protoderm cells of embryos, and in the shoot apical meristem in carrots [2, 3]. Apart from the developmental and tissue specificity, plant LTPs have a wide range of functions, including cutin biosynthesis, surface wax formation, plant defense, and adaptation of the plant to environmental changes, such as drought, cold, salt stress, and infection by bacterial and fungal pathogens.

Plant LTPs can be classified into two subfamilies according to molecular size: LTP1 (9 kDa) and LTP2 (7 kDa) [4]. LTP is a class of basic protein with small molecules [5]. LTPs have high stability, which may be due to the disulfide bond [6]. Structural studies have revealed that LTP consists of a hydrophobic pocket made up of four alpha-helix bundles and stabilized by four disulfide bonds, and a C-terminal sequence [7, 8]. Due to its hydrophobic cavity that is capable of accommodating fatty acids, phospholipids, or acyl-CoA, the LTP-phospholipid complex is regarded as the transportation between membranes [6]. Many studies show that LTPs may play important roles in plant defense mechanisms, and can be induced by pathogens. LTPs inhibit the growth of pathogens and bring the plant systemic acquired assistance (SAR).

LTPs isolated from plants can suppress the growth of several bacteria and fungi in vitro. Segura et al. [10] reported that two homogeneous proteins active in vitro against the bacterial pathogen Clavibacter michiganen-sis subsp. sepedonicus were obtained from a crude cellwall preparation from the leaves of Columbia wildtype Arabidopsis. Ooi et al. [11] isolated and purified a new LTP from the bulbs of the Chinese daffodil Narcissus tazetta var. chinensis L., named NTP, which could significantly inhibit plaque formation by the respiratory syncytial virus (RSV) and the cytopathic effect induced by the influenza A (H1N1) virus, as well as the proliferation of human acute promyelocytic leukemia cells (HL-60) in vitro. Rogozhin et al. [12] found a novel LTP called Ec-LTP from the resting caryopsis of weed barnyard grass Echinochloa crusgalli (L.) Beauv., which could inhibit the development of the pathogenic fungi Phytophthora infestansand Helm-inthosporium sativum, causing the late blight of potatoes and tomatoes, and the root rot of herbs, respectively.

LTPs participate in plant defense responses, but the specific mechanism is still not clear. Some believe that LTPs have a toxic effect on pathogens. Regente et al.

[19] isolated and characterized a basic antifungal peptide Ha-AP10 (Helianthus annuus antifungal peptide of 10 kDa), belonging to the family of plant LTPs. A direct cytotoxic effect on fungal cells mediated by membrane permeabilization was observed [19]. Some researchers believe that LTPs take part in plant SAR. Maldonado et al. [20] found that an LTP-like gene from Arabidopsis is involved in the production/transmission of the mobile signal in the systemic acquired resistance response. Sarowar et al. [18] revealed that LTP plays a role in long-distance systemic signaling in plants. Others maintain that LTPs interact with some molecules to regulate the plant SAR process [18]. Bu-hot et al. [21] and Blein et al. [22] reported that LTPs share some structural, functional properties and common binding sites with elicitins, which are known as elicitors of plant defense; LTP can bind to the elicitin receptor involved in the control of plant defense responses. As second messengers, several lipid molecules are involved in the regulation of plant cell signal transduction. LTPs interact with jasmonic acid and chitinase, and promote long distance signaling [20, 21, 23—25]. Furthermore, Ca2+/CaM systems are involved in the regulation of the LTP function [26].

In this study, we established an A. tumefaciens-me-diated transformation system of B. napus petioles, and transferred the LTP gene into rapeseed. Our purpose was to obtain stable transgenic plants with strong disease resistance to provide direct evidence that LTP could help improve plant disease resistance. Such a finding would be important for the improvement of the yield of rapeseed under stress.