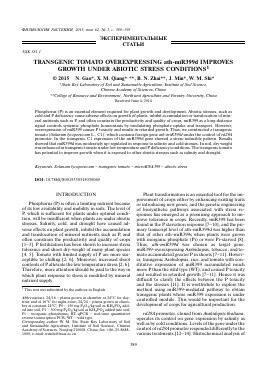 Phosphorus (P) is an essential element required for plant growth and development. Abiotic stresses, such as cold and P deficiency cause adverse effects on growth of plants, inhibit accumulation or translocation of mineral nutrients such as P, and often constrain the productivity and quality of crops. miR399 as a long-distance signal controls systemic phosphate homeostasis by modulating phosphate uptake and transport. However, overexpression of miR399 causes P toxicity and results in retarded growth. Thus, we constructed a transgenic tomato (Solanum lycopersicum L., C1), which contains foreign gene ath-miR399d under the control of rd29A promoter. In the transgenic C1 expression of the miR399d gene showed a stress-inducible pattern. Results showed that miR399d was moderately up-regulated in response to salinity and cold stresses. In soil, dry weight was enhanced in transgenic tomato under low temperature and P deficiency conditions. The transgenic tomato has potential to improve growth when it is exposed to other abiotic stresses such as salinity and drought.

Phosphorus (P) is often a limiting nutrient because of its low availability and mobility in soils. The level of P, which is sufficient for plants under optimal condition, will be insufficient when plants are under abiotic stresses. Salinity, cold, and drought have caused adverse effects on plant growth, inhibit the accumulation and translocation of mineral nutrients such as P, and often constrain the productivity and quality of crops [1-3]. P fertilization has been shown to increase stress tolerance and shoot dry-weight of many plant species [4, 5]. Tomato with limited supply of P are more susceptible to chilling [2, 6]. Moreover, increased shoot contents of P alleviate the low temperature stress [2, 6]. Therefore, more attention should be paid to the way in which plant response to stress is modified by mineral nutrient supply.

Plant transformation is an essential tool for the improvement of crops either by enhancing existing traits or introducing new genes, and the genetic engineering of biosynthetic pathways associated with stress responses has emerged as a promising approach to improve tolerance in crops. Recently, miR399 has been found in the P starvation response [7-10], and the primary transcript level of ath-miR399d was higher than that of other ath-miR399s when plants were grown with inorganic phosphate (Pi) or were Pi-starved [8]. Thus, ath-miR399d was chosen as target gene. miR399-overexpressing Arabidopsis, tobacco, and tomato accumulated greater P in shoots [7-11]. However, transgenic Arabidopsis, rice, and tomato with constitutive expression of miR399 accumulated much more P than the wild type (WT), and caused P toxicity and resulted in retarded growth [7-11]. Hence it was difficult to clarify the effects between the P toxicity and the stresses [11]. It is worthwhile to explore the method using miR399-mediated pathway to obtain transgenic plants whose miR399 expression is under controlled module. This would be important for the development of crops for agricultural production.

rd29A promoter, cloned from Arabidopsis thaliana, operates its control on gene expression by salinity as well as by cold conditions. Levels of the gene under the control of rd29A promoter responded differently to the various treatments [12-14]. Histochemical analysis of

expression of the rd29A-GUS fusion gene revealed that GUS activity driven by the rd29A promoter was induced in almost all the organs and tissues of transgenic Arabidopsis rosettes [12]. By using the rd29A promoter, the miR399d expression level would be weak or not detectable under the normal condition, whilst would be significantly increased under the stress condition. It would be easy to distinguish between effects of stresses and P toxicity.

Tomato is a major agricultural crop. Abiotic stresses, including salinity, drought, and nutrient deficiencies (such as P and N) often constrain its fruit productivity. We assume that an inducible expression, rather than constitutive expression of miR399, would improve plant growth, especially under adverse circumstances. We have obtained the transgenic tomato, which expressed ath-miR399d under the control of an abiotic stress inducible promoter (rd29A promoter), and will determine the response of transgenic tomato to low temperature and P deficiency. The objectives of the study were to test the hypotheses above.

Independent T0 transgenic tomato was propagated by stem cuttings and self-pollinated, and the seeds were harvested separately. T1 progeny of the T0 seeds were screened on Murashige and Skoog (MS) medium containing 50 mg/L kanamycin. To confirm integration of the transgene, Southern blotting was conducted. A transgenic line C1 with a 3 : 1 (resistance: sensitive) segregation ratio and with Southern Blot identification previously [15] was selected and the surviving seedlings were propagated and self-pollinated, until T3 seeds were harvested. Both transgenic and WT tomato seeds germinated on MS medium for 10 days at 24°C with a 16-h photoperiod. Uniformly germinated seedlings were transferred to a hydroponic system containing modified one-fifth Johnson's solution [11] and

grown for 5 days in a controlled environment growth chamber in the light with a photon flux density of 250 ^mol/(m2 s) at 24° C with a 16-h photoperiod and 70% relative humidity. Uniform 15-day-old seedlings were used for different treatments.

Identification of miR399d expression. To investigate whether miR399d would be transcripted by rd29A promoter under normal or NaCl stress conditions, transgenic T3 line (C1) and WT tomato were analyzed by real-time quantitative reverse transcription PCR (RT-qPCR). Uniform 15-day-old seedlings were grown in the growth chamber and harvested 24 h after the plants were exposed to the modified one-fifth Johnson's solution [11] containing 0 mM (no stress control), 75 mM or 150 mM NaCl. To minimize the effects of light/dark exposure and/or circadian-regu-lated responses, these treatments were initiated at 10 a.m. The roots and shoots of the plants were then separated, frozen, and stored at —70°C for RT-qPCR analysis. RNA isolation, cDNA preparation, and RT-qPCR were performed using the primer pairs described previously [9, 11, 16, 17]. The primers for LeASR1 were (Forward) 5' - GACTACGAAAAA-GAAATCAAACACC-3' and (Reverse) 5'-CTTC-

miR399d were (SL) 5'-GTCGTATCCAGTGCA-GGGTCCGAGGTATTCGCACTGGATACGACC-GGGGCAAA-3', (Forward) 5'-CGACGTGCCAA-AGGAGATTTG-3' and (Reverse) 5 -CCAGTG-CAGGGTCCGAGGT-3'. The primers for a-tubulin were (Forward) 5'-TGAACAACTCATAAGTGGC-AAAG-3' and (Reverse) 5'-TCCAGCAGAAGTGAC-CCAAGAC-3'. To avoid bias, relative expression levels were calculated and normalized with respect to a-tubulin mRNA (2-deltaCt x 102). Ideally, the conditions of the experiment should not influence the expression of this internal control gene. LeASR1, was thus selected as an additional control [17]. Three replicates of each line at each NaCl level were used for analysis.

Low temperature treatments. One low-temperature treatment was performed with plants grown hydropon-ically. Uniform 15-day-old seedlings were transferred into the growth chamber with both day and night temperature at 16°C. The roots of transgenic C1 and WT were harvested for RT-qPCR analysis at 4, 8, 12, 24, and 72 h after plants were transferred into different chambers. RNA isolation, cDNA preparation, and RT-qPCR were performed using the primer pairs as described in identification of transformants. To avoid bias, relative expression levels were calculated and normalized with respect to a-tubulin mRNA (2-deltaCt x 102). Four replicates of each line at each time point were used for analysis.

The other low-temperature treatment