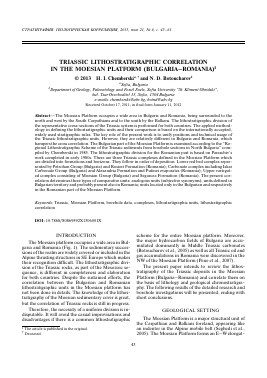 Abstract—The Moesian Platform occupies a wide area in Bulgaria and Romania, being surrounded to the north and west by the South Carpathians and to the south by the Balkans. The lithostratigraphic division of the representative cross-sections of the Triassic system is performed for both countries. The applied methodology in defining the lithostratigraphic units and their comparison is based on the internationally accepted, widely used stratigraphic rules. The key role of the present work is to unify positions and technical usage of the Triassic lithostratigraphic units. However, they are relatively different in Bulgaria and Romania, which hampers the cross correlation. The Bulgarian part of the Moesian Platform is examined according to the "Regional Lithostratigraphic Scheme of the Triassic sediments from borehole sections in North Bulgaria" compiled by Chemberski in 1985. The lithostratigraphic division for the Romanian part is based on Paraschiv's work completed in early 1980s. There are three Triassic complexes defined in the Moesian Platform which are divided into formations and horizons. They follow in order of deposition: Lower red bed complex represented by Petrohan Group (Bulgaria) and Rosiori Formation (Romania); Carbonate complex including Iskar Carbonate Group (Bulgaria) and Alexandria Formation and Putinei evaporates (Romania); Upper variegated complex consisting of Moesian Group (Bulgaria) and Segarcea Formation (Romania). The present correlation determines three types of comparative units: analogous units (subjective synonyms); units defined in Bulgarian territory and probably present also in Romania; units located only in the Bulgarian and respectively in the Romanian part of the Moesian Platform.

The Moesian platform occupies a wide area in Bulgaria and Romania (Fig. 1). The sedimentary successions of the realm are widely covered or included in the Alpine thrusting structures in SE Europe which makes their recognition difficult. The lithostratigraphic division of the Triassic rocks, as part of the Mesozoic sequence, is different in completeness and elaboration for both countries. Despite the sustained efforts, the correlation between the Bulgarian and Romanian lithostratigraphic units in the Moesian platform has not been done in details. The knowledge of the lithos-tratigraphy of the Moesian sedimentary cover is great, but the correlation of Triassic rocks is still in progress.

Therefore, the necessity of a uniform division is indisputable. It will avoid the casual improvisations and disadvantages if there is a common lithostratigraphic

1 The article is published in the original.

scheme for the entire Moesian platform. Moreover, the major hydrocarbon fields of Bulgaria are accumulated dominantly in Middle Triassic carbonates (Botoucharov et al., 2005) as well as all Triassic oil and gas accumulations in Romania were discovered in the NW of the Moesian Platform (Pene et al., 2007).

The present paper intends to review the lithos-tratigraphy of the Triassic deposits in the Moesian Platform (Bulgaria—Romania) and correlate them on the basis of lithology and geological chronostratigra-phy. The following results of the detailed research and borehole investigations will be presented, ending with short conclusions.

ed structural unit surrounded to the north and west by the South Carpathians, to the south by the Balkans, to the north-east by the North Dobrogea orogen and extending eastward to the Black Sea (Fig. 1). The Moe-sian Platform can be divided into tectonic units of different ranks.

The geophysical and borehole data indicate that the northern and southern margins of the platform are progressively buried below the sedimentary successions of the Neogene Carpathian and Balkan fore-deeps, to join at depth the orogenic units. In Bulgaria, the Balkans overthrust the southern margin of the platform along the north verging flexure zone, which is the surface propagation of the deep fault.

In Romania, the platform is separated from the Carpathian belt by the Pericarpathian Fault (Per-CarF), oriented E—W and dipping north, with its eastern part being curved northward (Seghedi et al., 2005). Along this fault the geological formations of the platform lie at great depths in comparison with those from the Carpathian foredeep. Most of the authors divide the Moesian Platform in two quite different sectors, simply named as East and West Moesia (Enescu, 1987; Visarion et al., 1988; Sandulescu and Visarion, 2000). They are separated by the Intramoesian Fault (IMF), which delimits the Calarasi depression and South and Central Dobrogea to the east from the rest of the Moesian Platform to the west (Fig. 1). The Peceneaga-Ca-mena Fault (PCF), Capidava-Ovidiu Fault (COF), Jiu Fault (JF), Motru Fault (MF) and Timok Fault

(TkF) are other important faults affecting the northern part of the Platform.

The buried part of the Moesian Platform consists of a gently folded basement unit which is overlain by a flat-lying Mesozoic-Cenozoic cover unit. The basement includes Precambrian metamorphic rocks and the overlying, folded Paleozoic formations. The metamorphic basement, known in areas of basement uplift in Romania, is highly heterogeneous. A great part of the basement rocks is represented by Neoproterozoic successions which differ in lithology, geochemistry and meta-morphism, but metamorphic series have been locally ascribed to the Archean and Paleoproterozoic (Oaie et al., 2005). Among the sedimentary cover in the Moe-sian Platform Triassic series are deeply buried, consisting of continental and shallow marine sediments with total thickness locally up to 2—2.5 km.

The present paper is based on an extensive investigation of more than 400 deep boreholes in Bulgarian and Romanian territory of the Platform. The lithostratigraphy and the reference data with log curves are demonstrated in Figs. 2, 3 and 4, showing only the representative Triassic sections. The log curves are very useful in setting up and tracing out the unit boundaries.

Fig. 2. Representative borehole sections of the lithostratigraphic units in the Lower red bed complex for the Romanian part of the Moesian Platform (modified after Paraschiv, 1979).

Fig. 3. Representative borehole sections of the lithostratigraphic units in the Carbonate complex for the Romanian part of the Moesian Platform (modified after Paraschiv, 1979).

Fig. 4. Representative borehole sections of the lithostratigraphic units in the Upper variegated complex for the Romanian part of the Moesian Platform (modified after Paraschiv, 1981a).

graphic Guide" edited by Hedberg in 1976. The Bulgarian part of the Moesian platform is examined according to the "Regional lithostratigraphic scheme of the Triassic sediments from borehole sections in North Bulgaria" by Chemberski (1985). The presented lithostratigraphic scheme has been compiled from comprehensive data collected in the course of several decades. The age of the rocks under the heading of "Chronostratigraphy" is based mainly on Chemberski (1984), summarizing the most important data for the Bulgarian part of the Moesian Platform.

The Triassic sediments in the Moesian platform occur in great depths