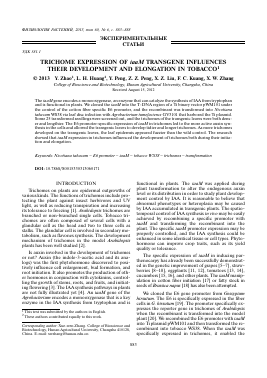 The iaaM gene encodes a monooxygenase, an enzyme that can catalyze the synthesis of IAA from tryptophan and is functional in plants. We cloned the iaaM into the T-DNA region of a Ti binary vector pWM101 under the control of the cotton fiber specific E6 promoter, and the recombinant was transformed into Nicotiana tabacum WS38 via leaf disc infection with Agrobacterium tumefaciencs GV3101 that harbored the Ti plasmid. Some 25 transformed seedlings were screened out, and the trichomes of the transgenic leaves were both denser and lengthier. The E6 promoter-specific expression of iaaM in trichomes led to the more active auxin synthesis in the cells and allowed the transgenic leaves to develop tidier and longer trichomes. As more trichomes developed on the transgenic leaves, the leaf epidermis appeared fuzzier than the wild control. The research showed that iaaM expression in trichomes influenced the development of trichomes both during their initiation and elongation.

Trichomes on plants are epidermal outgrowths of various kinds. The functions of trichomes include protecting the plant against insect herbivores and UV light, as well as reducing transpiration and increasing its tolerance to freezing [1]. Arabidopsis trichomes are branched or non-branched single cells. Tobacco tri-chomes are often composed of several cells with a glandular cell as the head and two to three cells as stalks. The glandular cell is involved in secondary metabolism, such as flavones synthesis. The development mechanism of trichomes in the model Arabidopsis plants has been well studied [2].

Is auxin involved in the development of trichomes or not? Auxin (the indole-3-acetic acid and its analogs) was the first phytohormone discovered to positively influence cell enlargement, bud formation, and root initiation. It also promotes the production of other hormones in conjunction with cytokinins, controlling the growth of stems, roots, and fruits, and initiating flowering [3]. The IAA synthesis pathways in plants are not fully illustrated yet [4]. An iaaM gene of the Agrobacterium encodes a monooxygenase that is a key enzyme in the IAA synthesis from tryptophan and is

functional in plants. The iaaM was applied during plant transformation to alter the endogenous auxin level or its distribution in order to study plant development control by IAA. It is reasonable to believe that abnormal phenotypes or heteroplasia may be caused by IAA accumulated in transgenic plants. The spatiotemporal control of IAA synthesis in vivo may be easily achieved by recombining a specific promoter with iaaM and transforming the recombinant into the plant. The specific iaaM promoter expression may be properly controlled, and the IAA synthesis could be enhanced in some identical tissue or cell types. Phyto-hormone can improve crop traits, such as its yield quality or tolerance.

The specific expression of iaaM in inducing par-thenocarpy has already been successfully demonstrated in the genetic improvement of grapes [5-7], strawberries [8-10], eggplants [11, 12], tomatoes [13, 14], cucumbers [15, 16], and other plants. The iaaM manipulation in cotton fiber initiation [17] or fatty stock in seeds of Brassica napus [18] has also been attempted.

Plant material. Tobacco WS38, a variety of Nicoti-ana tabacum, is usually used as a model plant in cellulose and lignin metabolism study.

Escherichia coli InvaF' was used as a host bacterium in the integrate recombinant plasmid construction.

Ti binary vector pWM101 was used as an initial plasmid. The pMD18-T with iaaM gene plasmid was kindly provided by Y. Zhao from the University of California, San Diego. E6 promoter was amplified and cloned from upland cotton (Gossypium hirsutum) genome.

E6 promoter amplification. The two amplification primers for E6 promoter amplification were designed as E6-1, 5'-CCCAAGCTTAAATTATACCATACCT-CACG-3' with Hindlll restriction site added and E6-2, 5'-GCTCTAGAGGCTATGGTTGCTAATGC-3' with Xbal site added according to the gene sequences of E6 (GenBank accession no. M92051.1). The PCR procedure was as follows: pre-denaturation at 94°C for 4 min; heat denaturation at 94°C for 1 min; annealing at 56°C for 45 s; extension at 72°C for 45 s; 30 cycles; terminal extension at 72°C for 10 min. PCR products were electrophoresed on 1% agarose gel, and the target band was recovered with Qiagen gel recovery kit. Restriction enzymes Xbal and HindIII were used to digest the recovered DNA.

Ti vector pWM-E6::iaaM construction. The iaaM was amplified from pMD18-T plasmid, and restriction site was added. PCR procedures were as follows: pre-denaturation at 95°C for 4 min; heat denaturation at 94°C for 1 min; anneal initiation at 59°C for 1 min; synthesis extension at 72°C for 2.5 min, 30 cycles; terminal extension at 72°C for 10 min. Amplified product was recovered from 1% agarose gel and digested with restriction enzymes Xbal and PstI. The E6 promoter and iaaM were inserted into pWM101 in its PstI and HindIII sites. The recombinant plasmid was transformed into competent E. coli InvaF', and the construction was verified by PCR and enzyme digestion analysis. Both the promoter and iaaM were se-quenced. The correct recombinant plasmid was designed as pWM-E6::iaaM.

The leaf discs were punched in 0.5-mm pieces from cultured sterile tobacco seedling. The discs were co-cultured with the bacteria in the suspension for two days. The leaf discs were then placed in solid medium (MS, 1 mg/L BA, and 0.1 mg/L NAA) at 25 ± 1°C and cultivated in darkness for three days. The discs were rinsed for 5 min with sterile water and transferred onto the selective medium for screening (0.5-strength MS with 30 g/L sucrose, 500 mg/L carbenicillin, 50 mg/L hygromycin, 1 mg/L BA, and 0.1 mg/L NAA). Shoots were induced in 3 weeks, and the buds were cut and transferred into fresh MS medium with 0.05 mg/L NAA, 500 mg/L carbenicilllin, and 50 mg/L hygromycin to induce rooting. Alternately light (16 h) and dark (8 h) were applied at the temperature of 25°C and light intensity of 1500-2000 lx. The roots appeared in 4 weeks, and the antibiotic-resistant plantlets reached a height of about 10 cm, and then they were planted in pots with soil.

PCR identification of the transgenics. The antibiotic-resistant tobacco seedlings were subjected to PCR identification. The CTAB method was applied to isolate the genomic DNA. A pair of specific primers of iaaM was expected to amplify the 2268 bp iaaM gene. The vector pWM-E6::iaaM plasmid was used as a positive control and wild tobacco was the negative control. We set a pair of primer target of virA gene in the case of Agrobacterium contamination leading to a false positive result.

The binary Ti plasmid pWM101 ("Clontech") was the starter vector and the 35S promoter was substituted by E6 promoter and the iaaM expression was under its control. A hygromycin resistance selectable marker gene was linked with the recombinant gene. The vector was designated as pWM-E6::iaaM (fig. 1).

The callus was observed growing at the edge of the leaf disc after co-cultivation with the A. tumefaciens and cultured 3 days in callus-inducing medium. Under the selective antibiotic hygromycin (50 mg/mL), the disc became whiter but a few tiny green calluses were formed on the edge and grew into small shoots (fig. 2). The