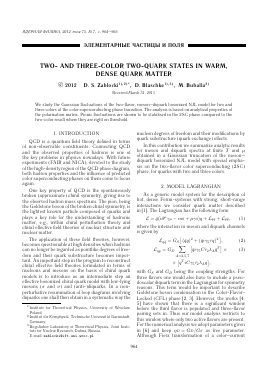 We study the Gaussian fluctuations of the two-flavor, meson—diquark bosonized NJL model for two and three colors at the color superconducting phase transition. The analysis is based on analytical properties of the polarization matrix. Pionic fluctuations are shown to be stabilised in the 2SC phase compared to the two-color result where they are right on threshold.

QCD is a quantum field theory defined in terms of non-observable constituents. Connecting QCD and the observed properties of hadrons is one of the key problems in physics nowadays. With future experiments (FAIR and NICA), devoted to the study of the high-density region of the QCD phase diagram, both hadron properties and the influence of predicted color superconducting phases on them come to focus again.

One key property of QCD is the spontaneously broken (approximate) chiral symmetry, giving rise to the observed hadron mass spectrum. The pion, being the Goldstone boson of the broken chiral symmetry, is the lightest known particle composed of quarks and plays a key role for the understanding of hadronic matter, e.g., within chiral perturbation theory and chiral effective field theories of nuclear structure and nuclear matter.

The application of these field theories, however, becomes questionable at high densities when hadrons can no longer be regarded as pointlike degrees of freedom and their quark substructure becomes important. An important step in the program to reconstruct chiral effective field theories formulated in terms of nucleons and mesons on the basis of chiral quark models is to introduce as an intermediate step an effective bosonized chiral quark model with low-lying mesons (n and a) and (anti-)diquarks. In a non-perturbative resummation of loop diagrams involving diquarks one shall then obtain in a systematic way the

nucleon degrees of freedom and their modifications by quark substructure (quark exchange) effects.

In this contribution we summarize analytic results for meson and diquark spectra at finite T and ^ obtained in a Gaussian truncation of the meson— diquark bosonized NJL model with special emphasis on the two-flavor color superconducting (2SC) phase, for quarks with two and three colors.

As a generic model system for the description of hot, dense Fermi-systems with strong, short-range interactions we consider quark matter described in [1]. The Lagrangian has the following form

where the interaction in meson and diquark channels is given by

with GS and GD being the coupling strengths. For three flavors one would also have to include a pseu-doscalar diquark term in the Lagrangian for symmetry reasons. This term would be important to describe Goldstone boson condensation in the Color-Flavor-Locked (CFL) phase [2, 3]. However, the works [4, 5] have shown that there is a significant window before the third flavor is populated and three-flavor pairing sets in. Thus our model analysis restricts to this window where only two active flavors are present. For the numerical analysis we adopt parameters given in [6] and keep nD = GD/GS as free parameter. Although Fierz transformation of a color—current

interaction suggests a value of nD = 3/4, there is no reason to take this value in an effective model. Rather one could try to fix it by data coming from compact star observations [7].

For the case of the two color theory, the antisymmetric Gell-Mann matrices reduce to the t2 Pauli matrix and the couplings have to be rescaled by a factor 2/3. The Pauli—Gursey symmetry fixes the coupling, nD = 1.

The mean-field approximation is employed, for details see, e.g., [8].

Expanding the thermodynamical potential up to Gaussian order in the fields gives rise to the polarization matrix [9] and thus includes quark— (anti)quark correlations. Solving the Bethe—Salpeter equation for the mass spectrum of two-quark states (mi = mn,mD,mD) is then equivalent to solving detn(fco, k = 0) |ko=mi = 0, where

The matrix elements in the ungapped diquark channels are degenerate (Щ.й* = ) and correspond to lengthy expressions which will be given elsewhere [11]. The integrals are defined as

(Top:) ¡1 dependence of the meson and diquark masses for zero temperature for fixed (small) coupling nD =3/4 in the three-color theory. Dotted (dash-dotted) lines are light stable (heavy unstable) modes in the ungapped A5 and X7 color directions. The degeneracy of the modes is also indicated. (Bottom:) Same as above forthe two-color theory (nD = 1).

with A^- = 1 and Aa = p2/Ep. The pairing gap in the 2SC phase is determined by the gap equation 8Ia = G~D1. We have chosen the diquark condensate in the \2 direction only (which can always be achieved by a global color rotation) so that the diquarks in the ungapped color directions are degenerate (¿5 = ¿7). For small couplings nD the set of Eqs. (5) simplifies due to negligible mixing terms. For three colors and finite chemical potential, we have in the %SB phase a mass splitting between the color antitriplet diquarks and the color triplet antidiquarks. The latter become massless (type-I) Nambu—Goldstone (NG) bosons in the 2SC phase, where the triplet diquarks split into a doublet of light type-II NG bosons and a heavy diquark in accordance with the Nielsen— Chadha theorem [12] for symmetry breaking with broken Lorentz covariance, see also [13] for a recent discussion. With the expressions derived here, we generalize this result of earlier studies [10, 14] to finite temperatures. The massive mode arises from the solution of k0 = 2Ay/l + (h/(A ■ /0))2, which is above the threshold 2A and thus unstable with respect to the decay into two quarks (the absence of confining properties in our model manifests itself here).

Some numerical results are shown in figure and show all of the features summarized in the table. The constant 0 < C(nD) < 2 in the table depends on rjD and takes its extrema for the nD values given in [1].

model, which are summarized in the table. This table represents an extension of results already found numerically in [10, 14—16] and shows that all of them are also valid for finite T. Having studied the behavior of the light meson and the (anti-)diquark sector in the %SB and the 2SC phase in the NJL model, a straightforward extension concerns the investigation of the effects of coupling the NJL model to the Polyakov-loop potential in order to suppress unphysical quark excitations at low temperatures. Another important aspect concerns the incorporation of Ward—Takahashi identities [17] in the further extension of these studies.

This work was supported by the DFG under contract BU 2406/1-1. D.B. acknowledges support by the Polish Ministry of Science and Higher Education and by the Russian Foundation for Basic Research under grant no. 11-02-01538-a. M.B. received partial support by EMMI. This work has been supported in part by CompStar, a research networking program of the European Science Foundation.

Note added in proof. While this work in press, two publications appeared concerned with the number of Goldstone modes [18] and the phase diagram of hot dense matter in two-color QCD [19].