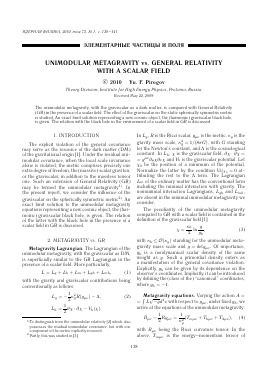 WITH A SCALAR FIELD

The explicit violation of the general covariance may serve as the resource of the dark matter (DM) of the gravitational origin [1]. Under the residual uni-modular covariance, when the local scale invariance alone is violated, the metric comprises precisely one extra degree of freedom, the (massive) scalar graviton, or the graviscalar, in addition to the massless tensor one. Such an extension of General Relativity (GR) may be termed the unimodular metagravity1). In the present report, we consider the influence of the graviscalar on the spherically symmetric metric2). An exact limit solution to the unimodular metagravity equations representing a new cosmic object, the (harmonic) graviscalar black hole, is given. The relation of the latter with the black hole in the presence of a scalar field in GR is discussed.

Metagravity Lagrangian. The Lagrangian of the unimodular metagravity, with the graviscalar as DM, is superficially similar to the GR Lagrangian in the presence of a scalar field. More particularly,

with the gravity and graviscalar contributions being conventionally as follows:

1)To distinguish from the unimodular relativity [2] which also possesses the residual unimodular covariance, but with one component of the metric explicitly removed.

In Lg, R is the Ricci scalar, is the metric, Kg is the gravity mass scale, n2g = 1/(8nG), with G standing for the Newton's constant, and A is the cosmological constant. In Lh, % is the graviscalar field, dx • dx = = d^xdvX and Vh is the graviscalar potential. Let Xo be the position of a minimum of the potential. Normalize the latter by the condition Vh|X0 = 0 attributing the rest to the A term. The Lagrangian Lm of the ordinary matter has the conventional form including the minimal interaction with gravity. The nonminimal interaction Lagrangians, Lgh and Lmh, are absent in the minimal unimodular metagravity we consider.

The peculiarity of the unimodular metagravity compared to GR with a scalar field is contained in the definition of the graviscalar field [1]:

with Kh < O(Kg) standing for the unimodular metagravity mass scale and g = detg^v. Of importance, gh is a nondynamical scalar density of the same weight as g. Such a primordial density enters as a manifestation of the general covariance violation. Explicitly, gh can be given by its dependence on the observer's coordinates. Implicitly, it can be introduced by defining the (class of the) "canonical" coordinates, where gh = -1.

Metagravity equations. Varying the action A = = f Ly^gd4x with respect to gMl/, under fixed gh, we arrive at the equations of the unimodular metagravity:

with R^v being the Ricci curvature tensor. In the above, Tm/JiV is the energy—momentum tensor of

the ordinary matter, TA[iV = AgiV is the vacuum contribution and ThiV is the graviscalar one. The latter has the form conventional for a scalar field:

except for Vh being the metapotential:

with V ^ standing for a covariant derivative.

Due to the contracted Bianchi identity, the tensor of the total energy—momentum satisfies the covariant continuity law:

with the metapotential reducing to

The field x has the same form as in the quasi-Galilean coordinates:

with the prime designating the derivative with respect to r. In the matter vacuum, Tm/JiV = 0, the metapotential Vh is given by Eq. (9) but for a singular point r = 0.

Fix the choice of the radial coordinate by the condition ab = 1. Designating A = a = 1/b and C = = cr2 we get the unimodular metagravity equations in the empty space as follows:

Harmonic solution. Consider the limit Vh = = Ah = 0. It results in the harmonicity condition, V • Vx = 0. The respective solution of the meta-gravity equations may be called the harmonic one. Besides, we take A = 0. In this case, the unimodular metagravity equations in the empty space coincide with the GR equations in the presence of a free massless scalar field. The exact solution to the latter equations was first found in a different context by Buchdahl [4]. We straightforwardly recover the solution as follows:

Spherical symmetry. Consider the spherically symmetric metric around a center. The line element for such a metric in the polar coordinates x0 = t, xm = (r, 9,y), m = r, 9, y, looks most generally like

with rh and Yh being some integration constants. Thereof, we can find gh in the given coordinates. The graviscalar field is defined modulo an additive constant. Call the respective cosmic object the harmonic graviscalar black hole. For consistency, \Yh\ < < 1. By taking Yh = 1, we recover the Schwarzschild black hole: a = 1/b = 1 — rh/r, c = 1, and x = 0. Incidentally, gh = -1 in this case.

Post-Newtonian approximation. To confront the harmonic solution with observations choose the isotropic coordinates, with a new radial coordinate r

defined through r = b, so that

In the static case we consider, the metric variables a, b, and c are the arbitrary functions of r alone. The same is true for gh. The graviscalar energy— momentum tensor is then

Decomposing the solution in rh/r we get up to the terms 1 /Г2:

where we have replaced the two intrinsic parameters, rh and Yh, by the two effective ones, rg and rs, as follows

In view of the gravity equations, this results in

with the integral saturated by a ¿-function singularity. We have

where Vk is a spatial component of the covariant derivative and

with nk = xk/r, r = |x| = (5klxkxl):/g. The Gauss theorem reduces then the volume integral to the integral over a remote surface a as follows:

Partite M onto the contributions Mm and Mh of the ordinary matter and graviscalars, respectively, as follows:

Graviscalar vs. ordinary scalar. Clarify the physical content of the harmonic solution. Let TßV = = TmßV + ThßV be the energy—momentum tensor of the ordinary matter and the graviscalars. Let TgßV be the Einstein gravitational pseudotensor in the quasi-Galilean coordinates (x°,xn), n = 1,2,3. Neglect the Л term. A result due to Tolman [5] states that the total energy (mass) M of a static isolated distribution is given by

with the integral saturated by a singularity at r = 0. The term V • Vx is produced ultimately by its self-consistent coupling with R° as a source. The Gauss theorem transforms the volume integral to the surface one with the result:

The parameter Yh characterizes thus the graviscalar contribution to the total mass. With M > 0, imposing Mh > 0 and Mm > 0 we get the restriction: 1

The upper bound corresponds to the Schwarzschild black holes with Mh = 0, while the lower bound to a pure graviscalar cosmic objects, the graviballs, with Mm = 0. Finally, the physical meaning of the two effective parameters, rg and r2, introduced previously is as follows: rg ~ M and r2/rg ~ Mh/M.

Let now % be a scalar field in GR. Though the solution found is the same in GR and the unimodular metagravity, the physical interpretation of the solutions in the theories is quite different. First