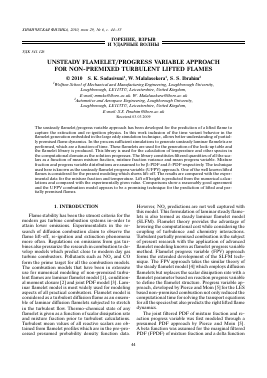 The unsteady flamelet/progress variable approach has been developed for the prediction of a lifted flame to capture the extinction and re-ignition physics. In this work inclusion of the time variant behavior in the flamelet generation embedded in the large eddy simulation technique, allows better understanding of partially premixed flame dynamics. In the process sufficient simulations to generate unsteady laminar flamelets are performed, which are a function of time. These flamelets are used for the generation of the look-up table and the flamelet library is produced. This library is used for the calculation of temperature and other species in the computational domain as the solution progresses. The library constitutes filtered quantities of all the sca-lars as a function of mean mixture fraction, mixture fraction variance and mean progress variable. Mixture fraction and progress variable distributions are assumed to be в-PDF and 8-PDF respectively. The technique used here is known as the unsteady flamelet progress variable (UFPV) approach. One of the well known lifted flames is considered for the present modeling which shows lift-off. The results are compared with the experimental data for the mixture fraction and temperature. Lift off height is predicted from the numerical calculations and compared with the experimentally given value. Comparisons show a reasonably good agreement and the UFPV combustion model appears to be a promising technique for the prediction of lifted and partially premixed flames.

Flame stability has been the utmost criteria for the modern gas turbine combustion systems in-order to attain lower emissions. Experimentalists in the research of diffusion combustion claim to observe the flame lift-off, re-ignition and extinction phenomena more often. Regulations on emissions from gas turbines also pressurize the research in combustion to develop models which predict close to modern day gas turbine combustors. Pollutants such as NOx and CO form the prime target for all the combustion models. The combustion models that have been in extensive use for numerical modeling of non-premixed turbulent flames are laminar flamelet model [1], conditional moment closure [2] and joint PDF model [3]. Laminar flamelet model is most widely used for modeling aspects of all practical combustors. Flamelet model is considered as a turbulent diffusion flame as an ensemble of laminar diffusion flamelets subjected to stretch in the turbulent flow. Thermo-chemical state of any flamelet is given as a function of scalar dissipation rate and mixture fraction prior to turbulent calculations. Turbulent mean values of all reactive scalars are obtained from flamelet profiles which are in the pre-processed presumed probability density function data.

However, NOx predictions are not well captured with this model. This formulation of laminar steady flame-lets is also termed as steady laminar flamelet model (SLFM). Flamelet theory provides the advantage of lowering the computational cost while considering the coupling of turbulence and chemistry interactions. Turbulent partially premixed combustion is the subject of present research with the application of advanced flamelet modeling known as flamelet progress variable method. Flamelet progress variable (FPV) approach forms the extended development of the SLFM technique. The FPV approach takes the similar theory of the steady flamelet model [4] which employs diffusion flamelets but replaces the scalar dissipation rate with a flamelet parameter based on reaction progress variable to define the flamelet structure. Progress variable approach, developed by Pierce and Moin [5] for the LES based non-premixed combustion not only reduced the computational time for solving the transport equations for all the species but also predicts the right lifted flame dynamics.

for reaction progress variable. The FPV approach has proved to predict the stabilization characteristics of a confined turbulent non-premixed swirling flame more precisely that SLFM. Using the direct numerical simulation (DNS) technique Ihme et al. [6] made some significant changes to the above methodology by in-crorporating the beta (p) function for the FPDF of reaction progress variable and also by providing a closure model for the reactive scalar variance term. Modeling of re-ignition phenomena at lower scalar dissipation rates was proved to be inaccurate and therefore lead to the extension of the FPV approach to unsteady flame-let formulation, Pitsch and Ihme [7]. This unsteady flamelet approximation was applied to the confined turbulent non-premixed swirling flames employed previously by Pierce and Moin [8], embedded with progress variable approach giving a new dimension to the flamelet theory termed as unsteady flamelet progress variable (UFPV) approach. The filtered PDF for the progress variable was assumed to be a delta function. A noticeable progress in the predictions of the distribution of mass fraction of CO was observed. In the present work the UFPV approach is used for the first time to predict the behavior of partially premixed turbulent lifted flames. Ihme et al. [6] proposed the FPDF to be a beta function distribution, but here due to computational cost a delta PDF is used for the progress variable. The beta PDF formulation has been used for the progress variable without the consideration of scalar dissipation fluctuations for lifted flames and found to predict good agreement with the experimental data, Ravikanti [9].

Large eddy simulation demonstrates accurate and more sophisticated methodology for turbulence calculations compared to Reynolds Averaged Navier Stokes (RANS) based modeling. LES resolves the large scale turbulent motions which contain the majority of turbulent kinetic energy and control the dynamics of turbulence, whereas the small scales or sub-grid scales are modeled. The advantage of resolving the large scale motion is not applicable to chemical source term as the chemical time scales are smaller and therefore combustion needs to be modeled. However, LES seems to have the advantage due to its ability to predict accurately the intense scalar mixing process in any complex flow. UFPV approach with LES takes the advantage of the improved modeling strategy and thus forms the current research issue.

Present study aims at performance calculation of UFPV model on the lifted flames. The lifted flame selected for the present study includes the experiments performed on a vitiated co-flow burner by Cabra et al. [10]. UFPV approach coupled with the in-house LES code developed by Kirkpatrick [11] is used for the simulations of the lifted flame. Complete comparisons of the lift-off height and radial profiles of mean temperature and mean mixture fraction with the experiments have been presented. Flame extinction and re-ignition phenomena are also explained with the scattered data

distribution of mixture fraction with the temperature and comparison with the experimental data at different axial locations along the burner.

In LES calculations, the large scales are calculated and the small ones are modeled. The box or top hat filter is used in the present code for solving the governing equations of the turbulent reacting flow by considering the equations of mass, momentum, mixture fraction and progress variable. Smagorinsky eddy viscosity model is used for modeling small sub-grid scales which are a prime source in combustion modeling. The dynamics procedure of Piomelli and Liu [12] is used to calculate eddy viscosity constant dynamically.

In the SLFM approach a turbulent diffusion flame is assumed to be an ensemble of laminar diffusion flamelets as mentioned earlier, which parameterizes the flamelets for the steady solution of flamelet equations with a conserved scalar, mixture fraction (Z) and its corresponding stoichiometric scalar dissipation rate (1st). This theory of SLFM forms the basis for the FPV approach. Steady flamelet model predicts neither the flame lift-off, which is typically a common feature in most of the combustion devices nor the extinction and re-ignition which has a considerable effect on the flame structure. The flamelet theory coupled with progress variable approach introduced by Pierce and Moin [5] addresses one of the above drawbacks with the steady flamelet modeling. But the flame extinction and re-ignition effects can only be captured by unsteady behavior of the flamelets. The incorrect representation of flame lift can lead to large discrepancies in flow field predictions, as shown by Pierce and Moin [5] and Pitsch et al. [13] which would certainly translate into inaccuracies in the prediction of pollutants. The flamelet progress variable approach can be considered as the initial principle modeling efforts for the development of UFPV approach.